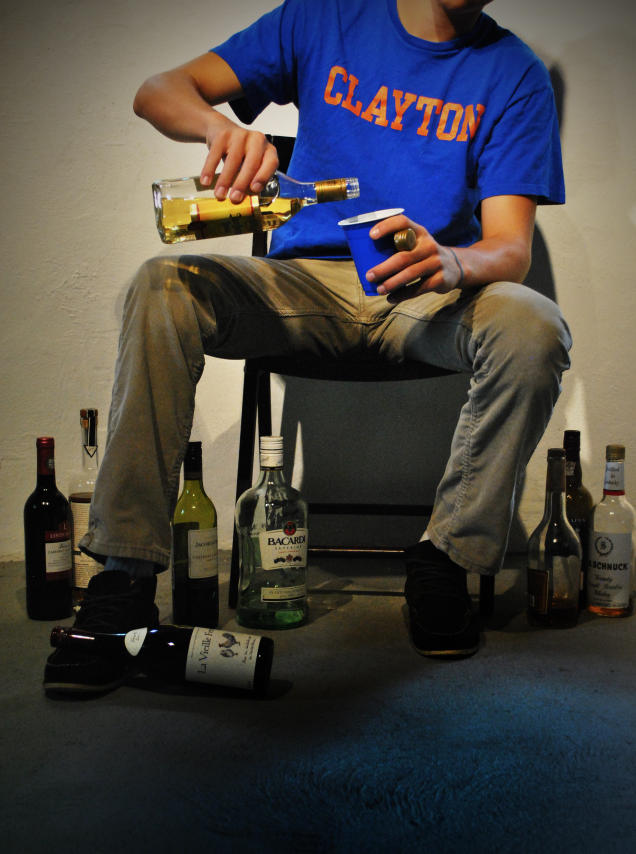 Fake IDs are allowing more Clayton students to purchase alcohol on their own.

She approached the clerk of the corner liquor store, a fifth of raspberry vodka in hand. She placed her ID on the counter, and waited for the clerk to accept her purchase.

There was a long pause until the clerk simply returned Jane’s* 22 year-old Illinois fake ID. Jane placed the fifth back on the counter and walked out of the store with her ID and no consequences whatsoever.

Jane, a Clayton student, wanted a way to purchase alcohol independently. So, a friend gave her the phone number of a stranger who could manufacture and provide her with a fake ID.

“The guy responded a month later [and] sent me … a form for my info,” Jane said. Jane’s friend met the provider outside of a South County bar and got both of their ID’s. The two ID’s cost a total of $120.

Along with the ability to buy alcohol for herself, Jane now can supply alcohol to those of her friends that don’t have fake ID’s. Frank* is a Clayton student who benefits from his friends’ fake ID’s, though he does not own one himself. He says that prior to or during parties, those with fake ID’s are the first ones asked for alcohol.

“Whenever people want alcohol, or at parties if they have no alcohol or run out of alcohol, they will go to the people with the fake ID’s and they’ll say, ‘will you make a run for us?’” Frank said.

Despite the appeal of buying alcohol, at this point Frank does not feel comfortable purchasing a fake ID.  Although his friends’ ID’s tempt him, he does admit that the owners look young.

“I think it could be kind of dangerous because you could get in a lot of trouble if they figure out it’s not legit or real, so, I mean, it’s too risky for me,” he said.

Although Frank is afraid to purchase alcohol, Jane now feels comfortable buying from a store that she has previously visited.

“I don’t get scared at places I’ve already been before, but if I was going to walk into a random place, I’d be nervous,” she said.

Frank is worried about the potential consequences for his friends, but realizes that Clayton students have figured out a way to avoid trouble.

“It’s risky and it does worry me sometimes, but the place that they go to get alcohol … it’s a guarantee,” Frank said. “As long as you don’t look 12 … and you have a fake ID [you will be okay].”

Although Jane and Frank spoke mostly about using ID’s for the purchase of alcohol, Student Resource Officer John Zlatic said that most of the ID’s that he gets are from kids going to bars or other establishments for people over the age of 21. Often times, an officer will find an underaged CHS student at an establishment and refer them to Zlatic who will talk to them at school.

According to Becky Biermann, a detective in the Washington University Detective Bureau, the ease with which underaged people manage to get into places that sell alcohol is what worries officers about fake ID’s the most.

“I think what concerns police officers in general is that these kid’s have the fake ID’s and sometimes they get themselves … into places that are 21 and over.  They can be served too much to drink or end up talking to people they don’t know and they just get themselves into situations that they wouldn’t normally get into if they weren’t in a setting like that,” Biermann said.

Working for Washington University, Biermann has witnessed firsthand the presence of fake ID’s on a college campus. She says that some ID’s, especially those that list states other than Missouri, can be difficult to identify as fake.

This makes it challenging for store clerks to differentiate between a real or fake ID.

Starrs is a liquor store that, according to management, appeals mostly to older audiences by selling fine wines and liquors. Management said that although fake ID’s are not a serious issue for their store because of the audience to which they appeal, they believe that fake ID’s are a growing problem in the community. They said that the convincingness of ID’s make them hard to identify unless the buyer looks very young.

According to some Clayton studdents, certain stores and clerks in the St. Louis area are more relaxed with their policies regarding the sale of alcohol.

Joe*, a Clayton graduate, remembers an experience he had while purchasing alcohol without possession of a fake ID. He was checking out at a shop notorious for not requiring identification. However, a new clerk asked Joe to show his ID. Joe, in a panic, handed the clerk his real, underaged ID. The clerk briefly looked at the ID before returning it to him and allowing him to finalize his purchase. Joe left the store with a six-pack of beer.

Zlatic feels that if alcohol is sold to minors, it is not the store ownership but the clerks’ decision.

“Likely what you’re going to have is somebody that works at that establishment that either sympathizes with those individuals [buying alcohol], maybe they know them or maybe they feel a little bit of sensitivity … so they’ll make a mistake in judgement without the owners or somebody more responsible knowing,” Zlatic said.

With the harsh consequences of being caught, he feels that owners would not want to risk losing their business by selling alcohol to people with ID’s that are potentially fake.

“If he [an owner] owns one or two liquor stores and does that, he could lose everything that he has,” Zlatic said.

Fake ID’s have a presence at every college and university. Washington University in St. Louis is no different.

“We are presented with the problem pretty frequently,” Biermann said.

Often times, Biermann finds multiple ID’s in a lost wallet when she tries to identify the owner.

“Most of the time, when we catch students … they lost their wallet and then somebody turns it in, and we have looked through the wallet to figure out whose it is and discover [that] they have two ID’s or maybe even three.  Then we start checking … and discover that one or two of them are obviously fake,” she said.

Sometimes, the students that are caught will tell Biermann the details about how they got their ID.

“[T]here’s a lot of internet sites that are pretty good where they can just give them their information … I think a lot of what is happening now is online ordering,” Biermann said. “Back when the internet wasn’t as popular and they didn’t have as many sites, I think it was more [common to] use somebody else’s ID that you knew. I think a lot of the ID’s we’re seeing are actually their picture and their information but just with a different year or different state, and so they’re really hard to tell that they’re fake sometimes.”

To get caught with a fake ID is not just a slap on the wrist. The consequence is a misdemeanor – the same as a speeding ticket or a minor in possession of marijuana. The individual would have to go to municipal court to receive his or her punishment. And in addition to a fine or whatever the penalty may be, if the owner is above 17-years-old, it can result in long term consequences.

“If you were 17 or older, you’re an adult,” Zlatic said. “So yes, that would be on your permanent record.”

So, every time a fake ID is used by a student, they risk the long term consequence of it being kept on their record.

Washington University has their own system of handling the problem of fake ID’s. If a student is caught, Biermann said that a judicial board reviews the case. Usually, it results in a fine and potential community service, but the University’s punishments have not had the desired impact on the student body.

“It obviously hasn’t deterred a lot of the students from doing it because over the past two years – I don’t think we’ve seen a decrease in the number of fake ID’s that we see,” she said.

While Biermann said that punishments do not influence Washington University students, Zlatic does feel that strict consequences keep liquor stores in line.

“The punishment is very severe for them. Not only do they have to pay a severe fine, then they’re under scrutiny. Their liquor license is jeopardized and for these places, selling liquor is how they make their business.”

If Clayton students want a fake ID, they can find a way to get one relatively cheaply. Students are making connections through mutual friends and peers that can organize large groups to receive ID’s. The issue at hand is that the fake ID’s are becoming more realistic, increasing in effectiveness in terms of purchasing alcohol. It remains unclear how much store clerks know in reality.

As students become more familiar with the process of purchasing fake ID’s, minors are taking initiative to buy alcohol independently. And so, if security measures do not improve, the probability that a given Clayton student will get a fake ID increases, and students like Jane can continue to walk out of liquor stores without consequences.