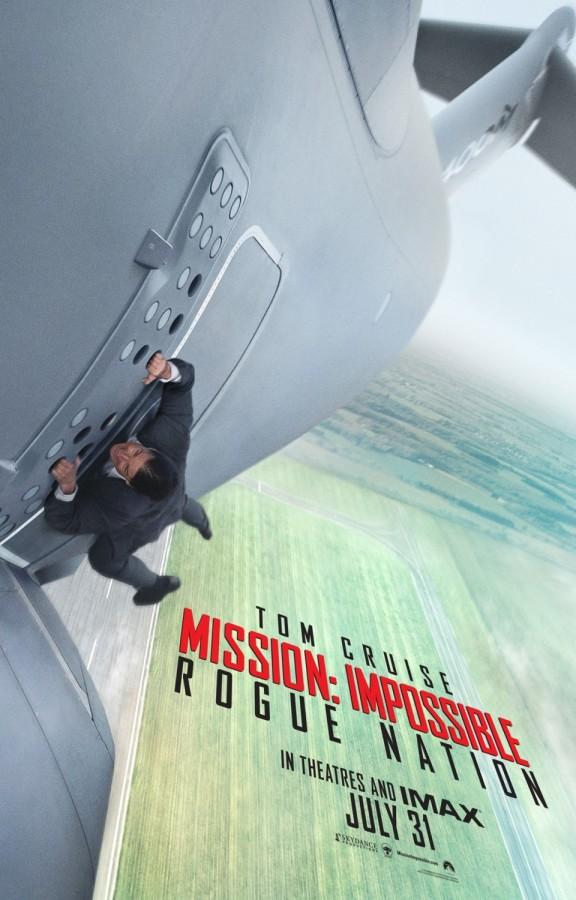 Mission: Impossible Rogue Nation is the fifth movie in the big-screen franchise, and it is quite possibly the best one. The new film is a prime example of what a spy movie should be: witty, filled with great action and to the point. Rogue Nation does not spend the first minutes trying to tell the plot through dialogue. Instead, it starts off with action and draws the viewer in. This was captured through the introductory act which had Tom Cruise hanging off the edge of a plane.

Rogue Nation’s main story begins when Ethan Hunt (Tom Cruise) is captured by the Syndicate, an international spy organization. After being freed from the Syndicate by an undercover agent IIsa Faust (Rebecca Ferguson), Ethan goes into hiding after finding out that the US government had disbanded his spy team (IMF) and are looking for him. While hiding, Ethan tries to prove the existence of the Syndicate, which leads to fighting during an opera, intense car chases, motorcycle shootouts and much more.

The film is crafted meticulously. When moving from set piece to set piece, the story uses smart dialogue along with an impressive soundtrack to keep the viewer’s attention.

Along with the crisp pace, the movie crafts its action very well. Unlike many recent action movies with shaky action scenes where it is obvious that the actors and the crew did not put much time into fight choreography; the action movie uses all of the fighting elements of the surrounding and the actor’s abilities to fight with wide, smooth shots, resulting in a much more impressive and intriguing fight scene that is very memorable unlike useless shootouts and fistfights shown in generic action movies.

Furthermore, the editing is well cut. The film never feels drawn out. It always makes the viewer’s adrenaline pumping while watching the movie, making it a much more “viewable” experience.

Another key element that film uses very well is the chemistry between Tom Cruise and Rebecca Ferguson. Rebecca Ferguson plays the role of another agent who is mysterious, so whenever she is in a scene, there is a sense of wonder and tension, as many of her actions in the film are unpredictable. Ferguson does not play the typical damsel-in-distress. Instead, she plays as Tom’s hardcore sidekick.

Along with the gadgets, the film utilizes snarky and light comedic comments from Simon Pegg and Tom Cruise. Recent films such as Kingsman: The Secret Service, The Man from U.N.C.L.E, and Furious 7 all include some sort of comedy, a current trend in action movies. All these movies were successful and generated positive reviews, while serious generic action movies like Run All Night and The Gunman garnered mixed to negative reviews. Rogue Nation blends comedy to an extent that makes it serious enough without losing any of the tension in the film. The Mission Impossible series is known for these elements, receiving positive reviews with a wide fanbase. Many might see this as the “same old thing”, but the series’ ability to incorporate new components to the its films have made it successful.

Overall, Mission: Impossible Rogue Nation is a movie that is rather familiar to fans of the series. However; it effectively employs all of its key elements, resulting in a prime example of how an action film should be done, making viewers yearning for more.