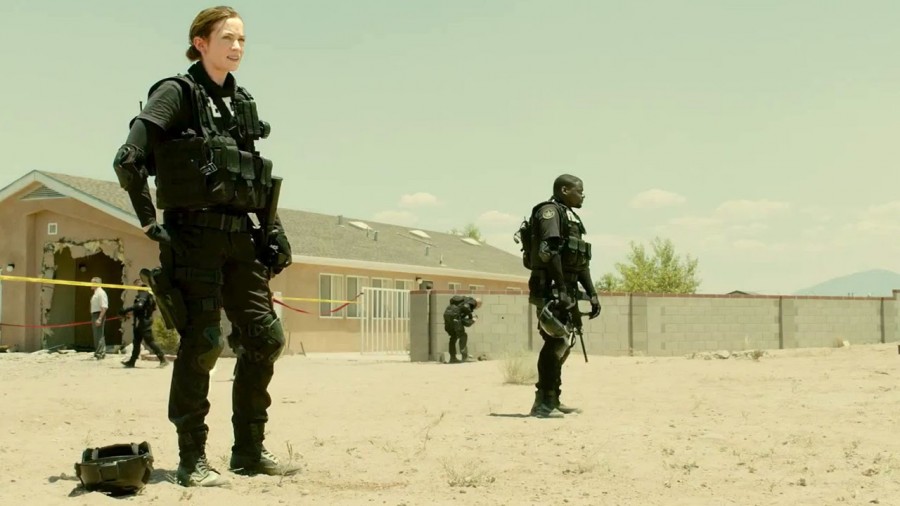 “Sicario” is not a two hour film full of exaggerated action. Instead, it is a slow-burn, realistic crime thriller that has a very grim atmosphere that encompasses the entirety of the film.

“Sicario” begins with a definition that says,”In Mexico, Sicario means hitman.” This leaves the viewer in confusion, making them question who the hitman is, yet the film never allows for any time to think as the opening sequence begins with Kate (Emily Blunt), an FBI agent, leading a FBI hostage-rescue squad that raids a drug cartel safe house in Phoenix.

The raid causes a short shootout. The shootout leads to the discovery of multiple butchered corpses behind multiple walls in the safe house.

Although the raid is successful, it results in the death of two officers working with Kate’s team.

Wanting payback for the death of her two coworkers, Kate joins an elite task force that is responsible for carrying out operations in order to capture the leader of the drug cartel in Juarez, Mexico.

Kate is accompanied by Matt (Josh Brolin), one of the members of the task force, and Alejandro (Benicio Del Toro), Matt’s partner. While conducting each mission, Kate’s suspicion about the legality and the grisly reality of the drug war in each mission drive Kate to a state of constant fear and confusion, leading to the consequences of knowing things she would not have liked to learn.

Emily Blunt delivers a strong performance, portraying Kate as an agent who has confidence, but who is also vulnerable. Blunt’s ability to convincingly pull off the two states of emotion is award-winning material.

Although Blunt shows the audience her great acting capability, it is Benicio Del Toro who steals the show.

Del Toro does not have that many lines, but his facial expressions and the coldness in his voice tell the entire story

Villeneuve never lets the movie lose the tension, resulting in fewer action scenes during the film. The action in this film is purposeful – not mindless shootouts. People in the film are shot so the story can move forward.

Along with the action is the grisly images of death that Villeneuve likes to incorporate in his films. Villeneuve does not allow for “minimal blood/gore,” nor does he allow for gore extravaganza. He adds them to add realism to the film to support the horrors and the reality the people near the US/Mexico border face constantly, and that is a good thing.

They provide the “shock” element in the film, supporting the dark and grim mood of the film.

Although a large part of this “tension building” effect is because of Villeneuve’s vision, cinematographer Roger Deakins provides beautifully crafted shots conveying the dark mood that Villeneuve aims for. The lighting and color used for the film aims towards a more natural look, supporting the realism factor for the film.

Along with the beautifully shot film is the eerie soundtrack composed by Johann Johannsson. The music for the film strays away from the usual heart pounding, extravagant sounds of violins and drums. Instead, the music aims towards an emphasis towards low drums and low strings, perfectly capturing the dark mood for the film.

Ultimately, “Sicario” is a great movie that intelligently shows the reality of the Mexican drug wars near the US/Mexico border through graphic content, great acting, no unnecessary violence, an eerie soundtrack paired with beautifully crafted shots, and the sense of tension that covers the entirety of the film.