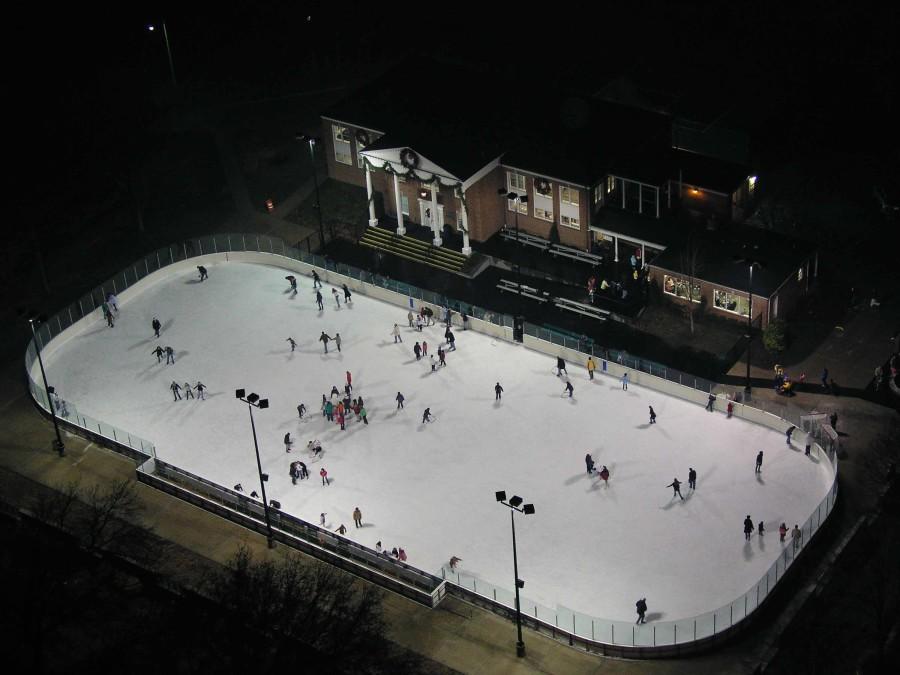 Whether it’s flying around the rink or gripping the wall, many in Clayton have come to appreciate the Shaw Park Ice Rink for its fun and sentimental value.

Built in 1960, the ice rink was made to last for about 50 years, and 2015 is its 55th birthday. The age of the ice rink is a big issue to Clayton Alderman Alex Berger III. Because its old age, it is hard to find parts to replace those that break.

“You can only repair these machines to a point where you can’t get parts and parts have to be custom made,” Berger said. “It becomes a losing battle.”

According to Berger, replacing it is a must if Clayton still wants an ice rink. If the rink was to stay as it is, “at some point in time it would go away.”

A survey done by the city revealed that the majority of residents want to continue to have an ice rink in Clayton. For long-time residents, the rink holds much sentimental value. Clayton’s director of Parks and Recreation, Patty DeForrest, knows of this significance to the public.

“I think there are good memories for most families tied to the rink whether the adults use it much or not,” DeForrest said.

However, in April of 2014, a proposition to raise taxes to pay for a $12 million multipurpose facility that would replace the Shaw Park Ice Rink was declined by voters. They did not think that having a new rink was worth an increase in their taxes. Nevertheless, since then, Clayton’s Board of Aldermen has worked to build the new ice rink anyway.

While it may seem that the city is going against public interest, ex-alderman of Clayton and supporter of the new rink Michelle Harris disagrees.

“The current options being considered are not [the original plan],” Harris said. The plan for reconstruction has changed from the one voted against by citizens and the Board thinks that this will make a difference in the public’s view of the project.

The major difference between the plan that was declined by voters and the current plan is the subtraction of a roof. The original plans that were voted down included a roof above the rink allowing skaters to use the rink year-round. Because of this change, the price of the plan has decreased to $6 million. This new plan would not raise taxes.

“[The money] would come from existing funds,” DeForrest said.

An important feature of the new rink would be its size. The current ice rink is under regulation size for ice hockey and therefore is not used by CHS for its hockey teams. However, Clayton’s hockey teams could have the ability to use the new rink to practice and play games.

Winter sports would not be the only ones benefiting from the reconstruction of the rink. The ice-skating season lasts for about 3 months, from the end of November through the middle of February. The plans for the new ice rink, however, include turning it into a turf field that can be used for different sports or events throughout the rest of the year. Adding an extra field would benefit athletics in Clayton by reducing the demand for fields in Shaw Park by recreational teams.

“Opening up the field for usage is almost more important than the ice, because think about all the different teams that could use it and all the nine months of the year it would be available,” Harris said.

As the plan nears implementation, the final stages of the process will include public input. There will be several public forums held where residents can voice their opinions. Harris encourages people to go and talk about their views on the project.

“The plan will be part of the ongoing agenda for the Parks and Recreation commission,” Berger said. Students can hope to see the new rink constructed by the start of the 2018 season.

While having a new ice rink is advantageous in many ways to the city and its residents, some will be sad to see the old rink go. The Shaw Park ice rink has been an iconic piece of Clayton history, and many residents have grown up around it.

“Students’ fathers, mothers, grandfathers, grandmothers, aunts and uncles all benefitted from this great asset, as [the students] will,” Berger said.