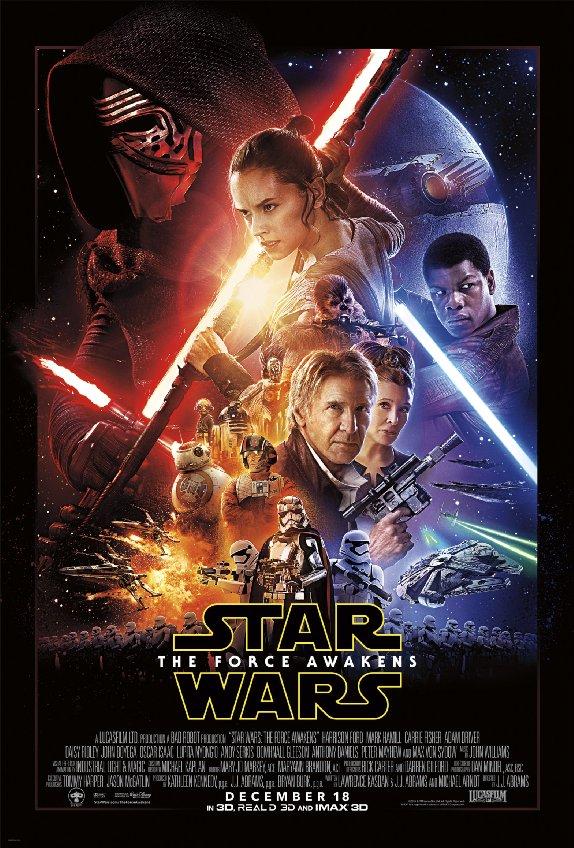 As the credits rolled for J.J. Abram’s highly anticipated film,”Star Wars: The Force Awakens”, the whole audience in the cinema cheered. People walked out of the theater with genuine smiles on their faces rekindled with memories of watching “Star Wars” for the first time to dueling with childhood playmates with toy lightsabers.

Although “The Force Awakens” has its flaws, the film’s immense strengths of displaying elements from previous “Star Wars” films along with providing a strong new cast, a sentimental soundtrack, and the work of the whole team who passionately made the film possible, producing a motion picture that will be treasured by all.

“The Force Awakens” is set thirty years after the events of “Return of the Jedi”. Luke Skywalker (Mark Hamill) has gone into hiding. BB-8, a droid that holds a map that leads to Luke. The First Order, rising from the remnants of the Galactic Empire intends to find Luke and get rid of him, especially a young sith lord named Kylo Ren (Adam Driver). BB-8 falls into the hands of a Rey (Daisy Ridley), a scavenger who lives on the desert planet of Jakku, and Finn (John Boyega), a stormtrooper that fled The First Order. The two join Han Solo and Chewbacca to make sure that BB-8 gets into the hands of the Leia Organa led Resistance before The First Order does.

The whole cast does a stellar job of portraying their characters, and the return of old characters is awesome, but it is the two new leads in the film that are outstanding. Daisy Ridley and John Boyega both deliver strong performances as the two new leads, Rey and Finn. Ridley does an amazing job of portraying a lonely scavenger on Jakku. To her hopeful yet desperate gazes across Jakku’s sand dunes to simple yet meaningful interactions with her co-stars, Ridley is definitely a talented actress. Similar to her co-star, Boyega portrays a runaway stormtrooper very well. Despite his depressing background in the film, Boyega offers passion and humor in the appropriate moments. Another thing I have to applaud Boyega on is his American accent. Boyega is a British actor, and his accent in the film is unnoticeable. The bond between the two leads in the film is incredible, and it really shows

Composer John Williams does a fantastic job of bringing back the feel of the original themes through a mix of prominent brass and orchestral themes that are reminiscent of old themes. However, Williams introduces new, memorable tracks. I like that he kept the old themes the same or only slightly tweaked, which is always delightful.

The cinematography in the film is excellent. Ranging from wide  shots of a downed starship to the lighting of the final lightsaber fight, it is all familiar territory. Cinematographer Daniel Mindel chooses particular shots to evoke the sense of the “Star Wars” feel. A couple of the shots/lighting examples that I particularly was astounded by were the shots that panned a downed starship, especially the one where Rey slid down a huge sand dune that covered the starship. The feeling of vastness that was expressed through these shots brought awe to the screen.

One of my favorite lighting choices for the film was the clash of red and blue in the film’s final duel. Rey and Kylo Ren have lightsabers locked in a fight to the death. The mix of red and blue that results in the color violet against the actors’ faces are a really nice touch. However, the color violet represents the clash of the light and the dark side. This small implication represents the one of many representations made through cinematography.

The choice to incorporate as many practical effects in the film is great. Scenes where Jakku could have been represented behind a green screen were actually filmed in the sand dunes of Abu Dhabi. Instead of telling visual FX artists to produce a fake Millennium Falcon, a real life-size model was built. BB-8 could have been CGI, but a functioning model was built. Creatures and props were passionately hand crafted into masterpieces. The existence of such things adds so much more to the feel of “Star Wars”.

The only issues I have with “The Force Awakens” are the characters that barely get any screentime such as Captain Phasma (Gwendoline Christie), and Poe Dameron (Oscar Isaac). Anyhow, all of the film’s best elements overshadow this minor issue.

Overall, the care that “The Force Awakens” has been put under by director J.J. Abrams and the passionate crew paid off to be a great seventh film in the franchise through treading familiar territory to let the public know that “Star Wars” is back, and it is returning as an even better franchise. The new trilogy allows for another generation of kids to experience the same awe we all did when we first watched “Star Wars”. Director Abrams and the whole crew have created a film that looks and feels like a “Star Wars” film, and it is great to see “Star Wars” back in action.