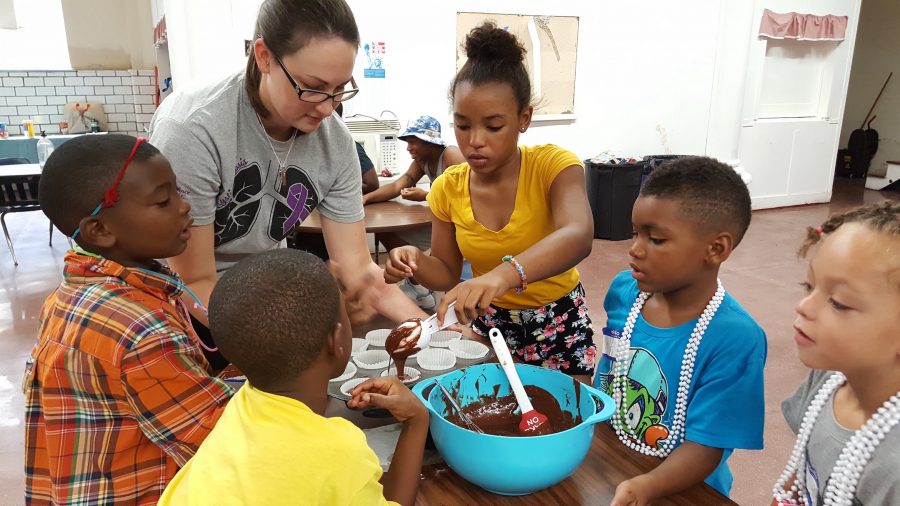 In addition to being a practicing lawyer, CHS alumni Elad Gross also works as a national advisor to several countries. Granted, these countries are fictional and governed by elementary age children, yet this fact does not diminish the importance of the job for Gross.

For Gross, being a national advisor means making a difference in kids lives through Education Exchange Corps (EEC), a nonprofit summer leadership program that targets youth in the Hyde Park area of North St. Louis City.

As the founder, president and chief executive officer, Gross has been a part of EEC since it was established eight years ago. Gross first developed the idea of EEC in part due to his experience at CHS, particularly at Summer Quest.

“I had worked as a counselor at Summer Quest and I knew I’d love to bring something like Summer Quest to kids who didn’t have that opportunity,” Gross said.

After CHS, Gross attended Duke University where he became interested in the summer learning loss, a phenomenon observed in kids, particularly from poorer communities, who fell behind academically over the summer. “You lose skills over the summer if you’re not doing anything,” Gross explained. “When [kids] go back to school, especially kids in underserved communities, they fall behind and don’t catch up.”

According to Gross, summer learning loss and a lack of summer opportunities is potentially a good explainer of the achievement gap, the statistical disparity between the academic achievements of white and black students.

Gross finally had an opportunity to address summer learning loss in 2008 through a program known as DukeEngage. Funded in part by the Bill and Melinda Gates Foundation, DukeEngage provides resources for Duke students to carry out their own community service projects throughout the world. “They [DukeEngage] were like ‘you can do community service anywhere in the world’ and I proposed a project back home,” Gross said.

At first, Gross had little more in mind than just providing summer opportunities for kids who wouldn’t otherwise have them. Gross and a group of other students from Duke, University of Missouri St. Louis and St. Louis University worked for the first few summers as teaching assistants in local summer school programs. “Initially, it was all about that positive summer experience where you were surrounded by people who cared about you and you were having a whole lot of fun,” Gross said.

However, as the school Gross worked with began to cut back their summer school program due to financial restrictions, Gross began to look for a new way to provide the same positive experience. Ultimately, Gross and the other members of EEC decided to form independent summer academies that worked with, but were not dependent upon the local school districts.

As Gross worked to develop the new academy program, he and the rest of EEC tried out a number of different themes, though none lasted more than one summer.  Leading up to the summer of 2014, as EEC searched for a new theme, a radical idea was suggested.”We thought, ‘What if we had the kids run a country?’” Gross explained. “We were kind of like ‘that’s a bad idea, why would we do that?’ but over the next hour we kept coming back to that idea.”

To make this idea a reality, Gross looked to his love of board games. “I’m pretty dorky so I had a lot of games I played as a kid and even today still,” Gross said. “We tried to insert a lot of those experiences and a lot of storytelling because kids really love that stuff.”

In the end, Gross and EEC created their own game that allowed the kids to simulate governing their own country. Each group of kids have their own nation and their own citizens of which they are national leaders. Given their resources, each nation must determine how much to tax their citizens as well as what public services to provide. Every action the nation makes affects their country’s “happiness points” which are tracked over the course of the program.

“This year, the kids were learning how to budget what they gave their people, what services they provided, crazy stuff you don’t expect a kid to figure out,” Gross said.

Throughout the program, Gross incorporates a number of international crises which the kids must address, either as individual countries or as a global community. These crises range from asteroids which must be destroyed with coke and mentos rockets to international terrorists which must be prosecuted in a mock court.

While the “happiness points” depend upon how the national leaders address these crises, the countries can never truly be destroyed. “It’s a simulation in which kids feel supported, but also to fail. Even if something goes wrong, it’s a learning situation rather than total failure,” Gross said.

In addition to the daily responsibilities as national leaders, the kids also get to participate in a number of events including cooking competitions and guest speakers. “I think it’s a really important concept to learn as a kid, that you are valued,” Gross explained. “That’s why it’s good to bring in folks from outside to show that they’re willing to give them their time.”

This past year, the national leaders were visited by a police officer, a state representative in the Missouri legislature and a federal judge. “We had a lot of people who are willing to come out, from all over the city and all over the country, to hangout and play with kids for an hour,” Gross said. “I think that’s something we can all get behind.”

This year, Gross added another aspect to the EEC summer program, once again inspired by Summer Quest. “I realized that Summer Quest is really a whole lot more [than the] younger kids who are going through the programming,” Gross said. “You’ve got older kids who are employed through the program. They’re learning leadership skills, they’re getting their first job, they’re getting critiques, they’re in a work environment and they’ve got coworkers.”

To incorporate this idea, EEC employed several local high school students who worked as national advisors this past summer. For Gross, this new component of the program expanded its effect on the community. “You’re creating an education opportunity and you’re creating an employment opportunity. That really helps empower communities where a lot of those opportunities don’t exist,” he said.

Gross hopes that eventually, the simulation can be used on a wider scale in classrooms throughout the year. “It has the potential to bring people together in this fun atmosphere but it’s also really applicable and you can use real life events and real life issues to teach kids what leadership looks like,” he said.

In addition to providing to learning opportunities to underserved kids, Gross believes EEC has the potential to unite St. Louis as a whole. “I think that a lot of the problems we’re seeing in St. Louis come from a lack of familiarity and really a lack of understanding,” he said. “I really think this [game] is an opportunity to bring people from different groups together and try to rectify that from a young age.”

Gross remembers one time when a police officer came to speak with the kids this proved especially true. “If [the kids] were older they were a little less comfortable but the younger ones were always talking and had lots of questions,” he said. “When we’re kids these divisions don’t really mean anything. It’s only when we grow older and are trained by the system that it actually sets in.”

While Gross is very optimistic regarding the potential of EEC, has questioned the magnitude of its impact. “Sometimes it can feel really isolating. It’s an issue that’s been around for a long time and you can only reach so many,” he said. “You’d expect a lot more people to get involved, a lot more people to care, a lot more people to make this huge commitment and find a way to finally fix this but it hasn’t happened yet.”

Despite his doubts, Gross has felt compelled to continue his efforts to make a difference through EEC. “I’ve worked with kids who are extremely smart and I’ve seen situations where kids should have opportunities and they don’t. I think it’s extremely unfair to have a community that doesn’t support everyone in it,” he said. “You’ve got families who’re really trying to give [their kids] every opportunity but you know that they’re going to go to a school that’s not really equipped to provide kids with a quality education.”

Although Gross aims to impact the community as a whole, his impact with individuals have been the most rewarding. “To see a kid learning is an awesome thing,” he said. “It’s really cool to see a kid internalize something. You’re like ‘No kid can run a government,’ but these kids are getting a whole lot of what it takes.”