The construction of the new fountain and waterfall in Shaw Park is complete. 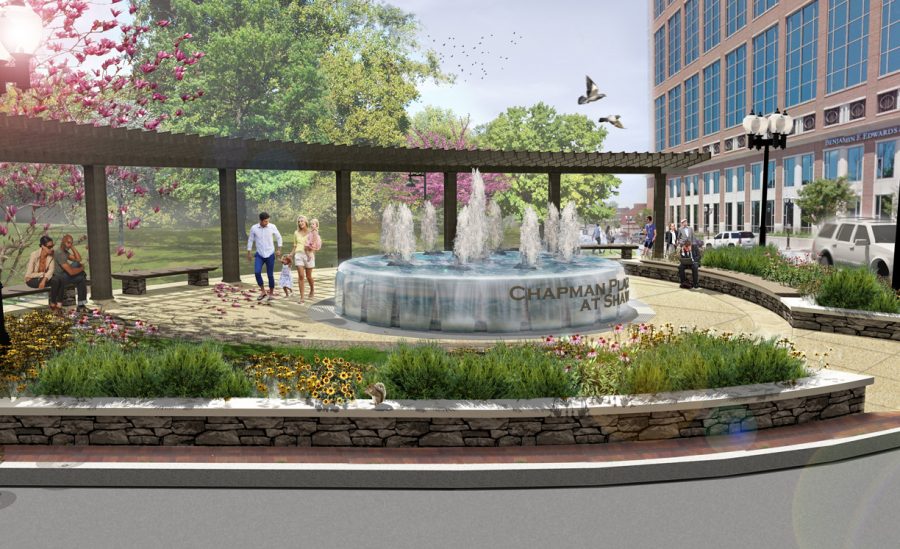 “Be among the first to enjoy the new link between Downtown Clayton and Shaw Park at the ribbon-cutting ceremony for Chapman Plaza and Gardens.”

On October 4th, 2017 from 5:30 to 7:00 PM, Chapman Plaza was opened with a grand ribbon-cutting event on the northeast corner of Shaw Park.

On the opening day, reporters and photographers bustled around to capture the event.

The crowd in attendance marveled at the new plaza and waited in anticipation of the opening speeches of the ribbon-cutting ceremony.

Families enjoyed the light refreshments and the sweet treats such as Ted Drewes’ custard and chocolate-chip cookies.

The family-centered event included a scavenger hunt for children. Flowers were available in big glass bowls for the public to throw into the waterfalls of the newly-opened plaza.

The event was made possible by the Clayton Century Foundation, the Chapman Family, and Barry-Wehmiller companies.

Barry-Wehmiller companies is a global manufacturing business that centers its focus on its employees and strives to create a workforce that prides itself on its moral leadership. Bob Chapman, the Chairman and CEO of Barry-Wehmiller, built up the company by stressing the importance of leadership.

In his book, Everybody Matters, Bob Chapman discusses the morals of business leadership, explains the importance of employee satisfaction, and stresses that everybody matters. The theme of family and good leadership plays a big role in the design of the partnered project, the Chapman Plaza.

As said by Mr. Chapman, the Chapman Plaza is an invitation into Shaw Park. The plaza features a magnificent color-changing fountain that stands on the corner between Forsyth Blvd. and Brentwood Blvd.

The CEO hopes that people who drive by or sit at the stop lights near the fountain will marvel at its beauty and become inclined to venture down the plaza into the park.

Taking in all measures, Mr. Chapman has created a design for the plaza that would be child-friendly and safe. The rounded street corner right in front of the plaza was strategically designed so that cars would slow down before turning, thereby making the plaza safer for children to be around. Details such as that reflect the huge amount of thought Mr. Chapman has put into the design of the plaza.

“The little kids will go over and put their hands in the water. It is kind of like a playground”, Chapman said.

In the backdrop of the fountain is a tall and curved wooden pergola. The wooden pergola was inspired by the St. Louis arch and stands as a structure that invites people to enter the park.

Below the shade of the wooden pergola are five benches which have words ingrained into concrete stones in front. Chapman chose the themes from his book, Everybody Matters, and has them engraved into stone.

“Everybody Matters. Show them.”

“Some people wish things were different. Listen to them.”

“Leader are everywhere. Find them.”

“Everybody wants to do better. Trust them.”

His message about good leadership and the importance of self-satisfaction are reflected in the ingrained words. The messages are intended to remind people of the simple things that are often forgotten.

“When you sit down here or walk up here you’re reminded of the message of caring for people.” Chapman said.

The construction project took about a year to complete. Before construction, the site was a bare grass hill. Mr. Chapman saw the hill as a challenge to construction but decided to incorporate the natural slope of the hill into the design of the project. The cascades, a series of meandering waterfalls, accentuate the slope of the hill. The curved stone pathways allow people to slow down and to appreciate the scenery and gardening alongside the path.

Located alongside the waterfall is a grotto. The grotto features a big stone slab next to the moving waters, which provides a beautiful spot for contemplation.

Chapman has dedicated this spot to his mother, Marjorie Estle. Engraved on the stone is the quote, “Tomatoes — 10 cents a pound,” which relates to a childhood story about when his mother would go door-to-door selling tomatoes in Iowa county in order to afford a prom dress.

Chapman chose to have this quote engraved next to the cascades because it represents his mother’s hard work and creates a memento for his family to remember her by.

The grotto has been designed as a pause in the adventure down the cascades but is  also a way for Chapman to celebrate his mother. Chapman has dedicated the Plaza and Gardens to his family, specifically to his mother and father.

Chapman loves his family, and the Chapman Plaza and Gardens reflect that. He has made sure that this park is fun, interactive, and safe for children. A series of stepping stones across the cascades allow people to explore and see the cascades and gardens from different perspectives. The various pavilions allow families to sit at tables and benches to enjoy the view.

Chapman has put tremendous thought into planning and designing the plaza. His messages, beliefs and hopes are evident throughout the many wonderful aspects of the plaza.