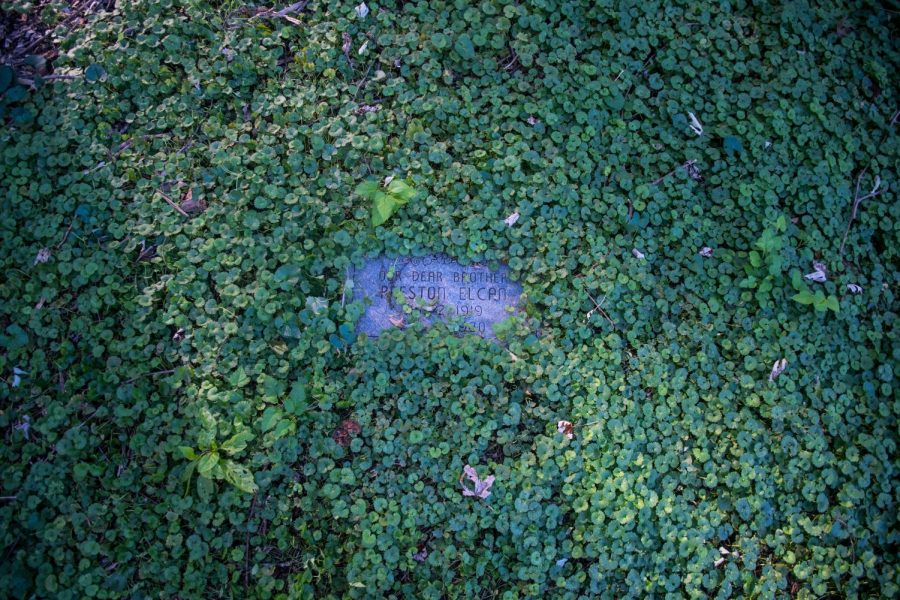 This is Washington Park Cemetery. Not only is it the largest African-American cemetery in St. Louis, built during the Jim Crow era, but it is also the resting place of well-known figures including George Vaughan and Miles Davis, Sr.

In the 1950s, Highway 70 was routed through the once sacred place. No bodies were disinterred and reburied during this process. In the 1990s, a MetroLink and airport expansion also intruded on the grounds; this time, however, the city bought the land, and the bodies were removed. These acts were the beginning of a history of neglect.

However, awareness is on the rise. In spring and summer of 2017, an exhibition titled “Higher Ground: Honoring Washington Park Cemetery, Its People and Place” was held at the Sheldon Art Gallery. The exhibition is the product of Jennifer Colten, a photographer and Washington University (WashU)  professor, Dail Chambers, a St. Louis-based artist, and Denise Ward-Brown, who is a filmmaker and also a WashU professor. A book encapsulating this exhibition was made as well, including essays by Michael Allen, senior lecturer in landscape architecture and American culture studies at WashU.

Here are three of their stories.

Colten was looking for a project. She had just moved to St. Louis and was not familiar with the city.

“I was just searching around. I didn’t really know anything about St. Louis. I was introduced to the cemetery and initially I was really just drawn to the landscape itself — the beauty of the landscape and the fact that it was really a place totally in transition, and I didn’t know why at the time. I was responding mostly for just for the way the lay of the land was speaking to me,” Colten said.

She soon learned about the segregated history of the cemetery and the stories of the people who are buried there. This history further compelled her to do the project; she could see how the landscape mirrored the issues of the cemetery’s history of neglect.

“There was this clearly beautiful and carefully designed place, but then the other things being reflected were that it had undergone a lot of neglect and a lot of real abuse like illegal burials. I was really interested in that contrast and paradox that is very visually present there,” Colten said. “I was very compelled to be going out here and going out there regularly. That’s part of my process anyway. To return, and return, and return to places and to get to know them over time. But I felt a real sense of urgency to be present there and to pay attention to the violence and the violation.”

Colten embarked on her project, photographing the cemetery while bodies were being disinterred. The disinterment process pushed Colten to not only take photos of the landscape, as she was used to, but also photos of the coffins.

“During that time I was really clear that I had to make certain kinds of photographs. I usually don’t make direct narratives, or documentations. But I felt like these things needed to be in the whole body of work to really tell the story,” Colten said.

Colten finished first round of the photos in 1993 but the opportunity for an exhibition did not come. In 2013, the project was reignited and after Colten won a Sam Fox School Creative Activity Research Grant and WashU’s Ferguson Academic Fund, she was able to start putting together the exhibition she had hoped for.

Colten wanted the exhibition, which came down in August, to raise awareness on the prevalent issues afflicting the cemetery.

“What I see is that what has happened to the cemetery and even the current state of the cemetery is really symbolic of a much larger set of issues that some people are facing and some people are addressing: the ongoing systems that have supported racism in the United States. Had it been a white cemetery, the Metro-Link, the highway, and the airport would be been rerouted,” Colten said.

While Colten is hopeful that the public’s level of awareness was increased, she now wants to travel with the exhibition to connect with other similar stories throughout the country.

St. Louis artist Dail Chambers’ grandmother died when Chambers’ mother was a young girl. She is now one of three relatives Chambers has buried at Washington Park Cemetery.

Chambers’ interest in the cemetery began as a quest to remember and honor these family members. She went through the Missouri Genealogical Society to find her relatives’ burial site information.

“When they gave me the burial site and the section numbers, I thought it was going to be easy-peasy. I was going to go out there, put the flowers on the headstone, and be done,” Chambers said.

However, what Chambers came upon at the cemetery made finding the sites a much greater challenge than she anticipated.

“[The cemetery] was a wooded thicket with trash,” she said. “I was not able to physically get to [the sites] because it was so overgrown.”

Chambers made her first trip to the cemetery in 2012. By 2015, she was tired of constantly searching for something so deeply hidden. She decided to retire the quest.

“You hear all these comments about African-Americans who have family members in that cemetery who have just given up. So I didn’t want to totally give up but it was emotionally and physically draining,” Chambers said.

Although she stopped searching for her family’s sites, Chambers continued visiting and trying to help Washington Park. Here, she met Dan Newman, one of the volunteers who regularly cleans at the cemetery.

Newman was able to locate one of the Chambers’ family member’s sites. When Chambers took her mother to go visit the site with her, her mother broke down in tears.

“It was disheartening and very emotionally difficult to see how your family members are being maintained,” Chambers said. “I just really think that it’s a class issue and it’s a race issue. But in St. Louis, the lethargy surrounding it is just shameful.”

As an artist, Chambers decided to document her journey through art. This is, of course, how Colten came to know about Chambers’ story and why she invited her to be a part of the “Higher Ground” exhibition.

Chambers’ pieces in the project are abstract, meaning upon first glance, they would not look like race-based art. Actually, as she was growing up and on her journey to becoming a professional artist, Chambers did not think she was going to be making race-based art. She quickly realized that is near-impossible in this day and age.

Standing with her colleagues, Chambers believes that hope still exists for the cemetery. Still, she knows that one of the main issues pertains to funding. Chambers hopes to see a large committee tackle funding and care for Washington Park.

“It looks a lot better than it used to,” Chambers said. “The exhibition has helped with that. While the exhibition was going on, I was going out there and I could see the progress. Progress is being made. But not at the rate of other cemeteries.”

Michael Allen, who studies urban ruins and segregated landscapes, had not investigated the Washington Park Cemetery in depth before Colten approached him about participating in the exhibition. Still, he had heard about it and had always been fascinated by the issues surrounding the cemetery. When Colten came with her invitation to write essays on the degraded burial site, Allen was up for the challenge.

On Allen’s first trip to the cemetery, the sight was sadly too familiar.

“I was kind of struck by how much it fits into these other neglected areas in the city. I mean, it looks the same. The same plant species, the same patterns of neglect. Which is sad because that commonality averts the sacred intentions of a landscape like that,” Allen said.

Not only was the cemetery similar in its overgrown landscape, but the issues underlying the desecration mirrored the systemic issues Allen has been researching in other segregated landscapes.

“it’s an artifact of a system of making — a whole place into two places, at least two places,” he said. “There are other forms of oppression and discrimination. But the segregation of black and white people takes what could have been one landscape and manufactures two different sets that ultimately accord to two different sets of care and two different ways in which the government protects or razes those kinds of places.”

Allen is adamant that this neglect of the cemetery shows how St. Louis locals need to do a better job remembering their history.

For example, the natural beauty of the overgrowth can be romanticized by people who do not have a “dog in the fight.” Allen caught himself making the same assumptions on his first trip to the cemetery.

“There’s also a strange beauty in the woods which I had a hard time writing about because my people aren’t there. I’m not feeling the same pain, but there is a little bit of a beauty to the natural order that’s emerging there but that isn’t seen as beauty to most people there. We appreciate some of what we’re seeing in nature but we’re not the keepers of the place and we’re not the ones who have memories,” Allen said.

He notes, however, that for the people whose loved ones are interred in the cemetery, the overgrowth is muting the memories of their family and their achievements, while the romanticization of the nature is symbolic of many Americans’ inability to truly connect with their history.

“Because americans don’t really hold their history close — many people don’t know their local history — we have a strange fascination with ruin and sights like that because of its allure:  overgrown, it’s mysterious, it’s a message left by ancestors. It’s only alluring though because we’ve lost contact with that history.”

Nonetheless, Allen is hopeful that this attitude is changing and that the exhibition will have peaked public interest in local history.

“I think more and more americans, even white, are more interested in knowing about Missouri’s black heritage and St. Louis’ black heritage. A lot of black neighborhoods have been erased but the cemeteries can build a tangible place to remember those stories. So I’m somewhat optimistic that in building the exhibition, the awareness is going to be something that transforms the total space. Although it is pretty hard to envision a total transformation…”