The Clayton Cross Country team's challenge to maintain a streak of qualifying for the State Championship meet. 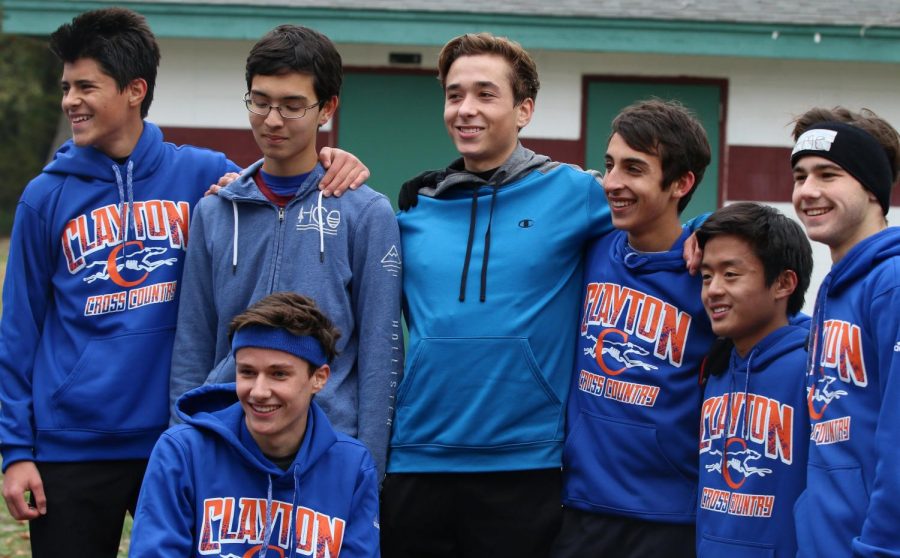 These inspirational words from Coach James Crowe guided the CHS boys’ cross country team just before they raced in the district meet.

Coming into the race, the team faced high pressure to succeed. The athletes ran to uphold the seven-year streak for competing in the State Championship meet, only awarded to the top two teams in each district race. The year before, the team had lost their five-year streak of winning their district meet.

This trouble came from a district rearrangement last year, which added Westminster Christian Academy and Priory High School to the Class 3 District 3 meet. In 2016, Westminster blocked Clayton from winning the meet for the first time in five years. This year, the runners feared the strong Priory team would block them out of the State Championship.

Clayton had competed against Priory in the 5K (3.1 miles) twice earlier this season, in the Forest Park XC Festival and in the John Hancock Invitational. Both times, Priory beat Clayton.

The boys faced another adversity at this race. CHS junior Damien Stahl, one of the top five runners, had to miss the meet. With Stahl, they had lost to Priory; without, their chances seemed low.

Inconsistent conditions, however, made it impossible to predict the victor. Priory runners had accidentally switched timing chips earlier the year, skewing the predicted time faster for one of their racers. Additionally, CHS sophomore George Gelzer – the second runner on the team – missed the Hancock meet against Priory, further muddling the predictions.

Saturday’s weather – 40° – was the coldest race they had run all season.

The bus arrived at Spanish Lake Park and the boys began to warm up before their race. As they discussed their upcoming competition, the pressure started to set in.

“I feel great now,” said Gelzer, “but whenever we get up to the line I get nervous.”

When the boys reached the starting line and removed their warmup clothes, the cold hit them.

Then, at 10:30, the sound of the gunshot cracked through the air. The race had begun.

Senior and Boys’ Team Captain Alex Szabo, along with Gelzer, led the Clayton pack at the first mile with a time of 5:13. Following them came two Priory runners, then sophomore Emilio Rosas Linhard and junior Justin Guilak, at 5:25 and 5:29, respectively. The fifth and final scoring runner, junior Andrew Wang, started out at 5:39.

Szabo and Gelzer reached the second mile just 10:50 after the start of the race, setting an impressive 10 second two-mile record for Gelzer. Guilak and Rosas tried to hold off a large pack of Westminster racers, with a time of 11:17. Wang followed them with 11:40.

By the time the final stretch came around, none of the runners could guess at the outcome. With Priory runners placed in between the Clayton groups, there was no clear victor.

Regardless of the competition, the boys had an excellent race and many of the runners ran their fastest 5K ever.

Szabo finished in third at 16:59, setting a personal record (PR) and breaking the 17-minute barrier, one of his season goals.

Gelzer followed closely with a time of 17:03. This marked a 36 second improvement from his all-time best and, finishing in fourth, the closest he had been to beating Szabo.

Rosas’s 17:52 personal record was almost shadowed by finishing in 16th, missing the cutoff for individual State Championship qualification by one second. If the team did not finish in the top two, Rosas would not run at State.

Wang set a seven second PR from his performance at the Clayton Invitational, just one week before, and finished in 20th.

Walking away from the finish line panting, the boys were met by excitement and praise from Crowe, along with assistant coaches Derrick Stone and Conner Katsev.

“Now that’s how you run a race!” Crowe said.

Desperate to determine the results, the runners scrambled to calculate the overall scores, still unsure if Priory had defeated them. Then, Stone gathered them around the team tent to read the results.

A cheer erupted from the crowd. Amidst the celebratory screaming, each of the runners echoed the classic “Let’s go boys!”

Cross country is scored by adding the finishing place of the top five runners of each team. Clayton scored 54, while Priory had 63.

Upon receiving the MSHAA plaque for winning second, the boys each took a bite into the wood – part of a long standing tradition for districts, which they could continue because they had not lost the streak.

Because of their victory, the boys’ team will travel to the State Championship in Jefferson City once again. Accompanying the seven runners, Stahl and sophomore Ben Williams will serve as alternates in the event of injury.

“Without my team, I wouldn’t be going to state even though I ran a good time,” said Rosas.

“This state squad is gonna be lit!” said one runner.

The varsity girls’ team also competed in the district race. After losing to MICDS and the newly-added Westminster team in 2016, they did not expect to make the State Championship this year. Regardless, the individual runners had outstanding races.

Senior Gracie Morris finished 10th with a time of 21:07, meaning she will accompany the boys’ team to run in Jefferson City. This also marked a season record for Morris.

A cross country newcomer, sophomore Sammy Williams, set a massive, 76 second PR. She finished 31st with a time of 24:52.

Lastly, freshman Nora Mitchell ran yet another impressive PR, 42 seconds faster than her previous record, with a time of 28:26.

Looking forward, the boys’ team has a chance of scoring well at the State Championship. Stahl’s return as a runner could cut their score down significantly.

“If Damien runs hard, we could get pretty close to top five this year,” said Wang.