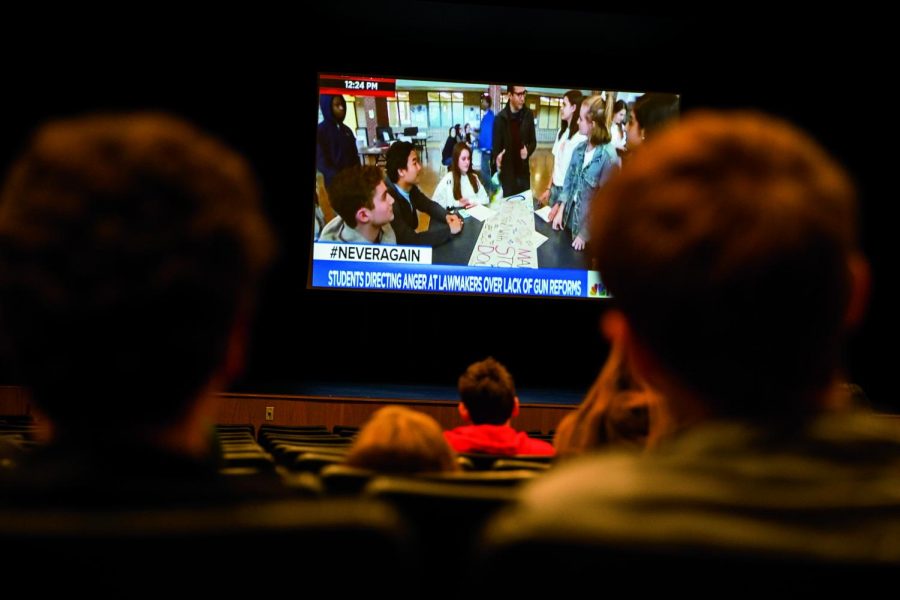 CHS students serve their lunch detention in the auditorium after the walkout.

Detention. The epitome of a high school punishment. When portrayed in media, it is lacking energy, boring, and silent. But during lunch periods on March 19 and 20, the mass detention in the auditorium was humming with energy. About 300 students had received detentions for walking out in protest of gun violence.
On Wed, March 14, at 10:00 A.M., Clayton High School students, along with students from more than 2,500 other high schools across the nation, walked out to protest the increasing amount of gun violence. Some protesters carried signs demanding changes in gun laws and others supporting the victims of gun violence. Students gave speeches on varying topics surrounding gun laws and violence. Many of those who participated in the walkout felt inspired and empowered.
The nationwide walkouts were sparked by one of the world’s most deadly school massacres. About three months ago, at Marjory Stoneman Douglas High School in Parkland, FL, a total of 17 people were shot and killed: 14 students and three staff members.
Although this was not the first school shooting in America, the response that came from this tragedy was very different from those of other shootings that had happened. As people all over America mourned the victims, Marjory Stoneman Douglas High School students began to demand change from legislators. Through the use of technology, demonstrators organized nationwide events, one of which included the National School Walkout.
The punishment that came with the walkout was productive. With the supervision of history teacher Debra Wiens, students watched news footage of CHS and other high schools across the nation. The coverage of student walkouts mirrored the impact and change demonstrators had created. Additionally, small groups discussed ideas and made suggestions on how to make changes to gun laws. Overall, many felt that the detention was important, and it helped demonstrators debrief and further understand what demonstrators had walked out for. Students felt pride and a stronger sense of unity.
This sense of pride, however, was not shared between the students and the community surrounding them. Instead of focusing on the reason of the walkout, TV coverage and other forms of media focused instead on the detention following the walkout. As a result, viewers throughout the entire country criticized Clayton Administration, blaming them for not supporting the walkout.
Because of this backlash, the Clayton School Board was contemplating the decision to change the policy. The changed policy would ensure that students who walked out would not get detentions, but members of the Clayton High School Student Action Committee (SAC), which organized the walkout, spoke out against the idea. At the meeting, senior Mitali Sharma described, “Civil disobedience is only powerful if it is truly disobedience. We did not get a free period for 17 minutes of free time. We have chosen to accept penalization and use the act of defiance to make our voices heard.” Her statement underlines the main purpose of the punishment that come from civilly disobedient actions.
Furthermore, if the school board were to change the policy, they would lose their neutrality, a key part of a public school. It would be wrong for the school board to be allowed to pick which issues are “right” and excuse punishments. Also, the administration had obvious support for the actions of SAC, and they tried to help as much as they could.
The Globe encourages those who disapproved of the administration’s actions to understand the position of neutrality administrators need to maintain. Administration has had unfaltering support for the walkout, and the punishment that comes from the walkout is educational and safe.