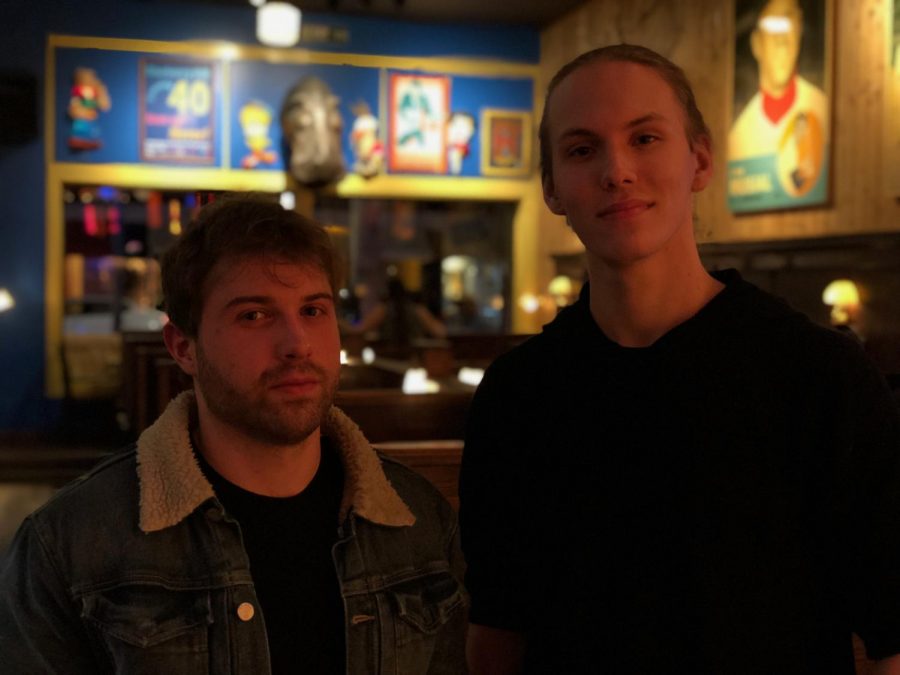 If you haven’t heard of him yet, you’ll surely hear of him soon. Skrizzly Adams is an up and coming Americana rock artist who has produced some fantastic songs, and has a lot more in store for us. He has released two major projects, ‘Stains – EP’ and ‘Atlantic City – EP’, and he also has some singles such as ‘Redemption’ and ‘Anyway’. But most of his songs are stored up in the vault, and will be released in the near future. This year, he has at least one or more singles coming out each month, so there is quite a lot to look forward to. I sat down with the 27 year old artist at Blueberry Hill to discuss his artistry, his history as a musician, and the music industry as a whole.

Right off the bat, he wants those of you reading to be aware that he has a lot of new music coming out soon. This year, he will be going off what he calls the “single cycle”. That means releasing singles frequently, rather than building up to the release of an album. He believes if you feed fans a little at a time, it keeps them much more interested. The more regularly an artist comes out with new music, the easier it is to keep the attention of listeners. But Skrizzly does not plan on releasing subpar songs; he is passionate about writing his music, and he says he will be delivering some hits soon. He claims another way to keep fans interested is to stay connected with them through social media. Being relevant online is extremely helpful in creating a fan base.

When Skrizzly was fifteen years old, he began singing out of necessity. He was a guitarist in a band, and only sang when he was needed. He never thought of himself as a singer. In fact, he was even afraid to do karaoke for a while. Skrizzly mostly stuck with playing instruments all the way through his college years. One summer, he began experimenting with digitally producing beats. He created three and sent them to hip hop artist Chris Webby. Out of the three very first beats Skrizzly had ever created in his life, Chris really liked two of them, which made Skrizzly realize he had a definite talent in that field. He used those two beats, and one of them had Skrizzly singing in the background. This can be heard on his track ‘Crashing Down’. After this, Skrizzly helped Chris produce songs, and he often wrote hooks for him. Some of the best rap songs often have a hook sang by another vocalist, so Skrizzly also helped in the search for the right singers to be featured in Chris’ songs. Eventually, Chris decided that Skrizzly was talented enough to sing some of the hooks himself. That was what began his singing career.

Skrizzly now has an expensive recording set-up in his parents’ basement where he records his songs. He is also good friends with the audio engineer Ken Lewis, and he records some of his best vocals at Ken’s studio. At this very moment, it costs Skrizzly zero dollars to create a track, because he writes and produces every aspect himself.

Although it took time for Skrizzly to master the art of singing, songwriting came completely naturally to him. He once won a songwriting competition that is famous because every single winner has gone on to produce platinum records. When he thinks of a good song lyric, he never writes it down. He goes the rest of the day without thinking about it, and if he still remembers it at the end of the day, he know it’s good. He does this process because he wants his lyrics to be memorable, and they are not memorable if he can forget them in just one day.

Skrizzly Adams’ favorite part about being an artist is getting to perform on stage. While his ultimate goal is to be able to sell out stadiums, he currently loves the smaller venues at which the audiences are rowdier and everyone is more engaged. When he toured as an opening act for singer Elle King, known for her song ‘Ex’s & Oh’s’, he interacted with larger crowds and realized they were much less engaged. His first time performing for a huge crowd, he was mortified by the lack of enthusiasm being displayed by the audience. After the show, he heard that people really enjoyed his act, which came as a shock to him since they did not seem to show a lot of interest. Skrizzly came to the conclusion that, at bigger venues, there is simply less of a direct connection to the performer, and audience members feel less of a need to be involved. Smaller venues are where all the fun happens. He also determined that certain areas of the country are simply quieter and more difficult to get riled up, regardless of the passion Skrizzly brings to the stage. He says that calling the crowd out is always a good tactic. One question that Skrizzly enjoys asking small crowds is “Who likes beef jerky?” He always sells his original beef jerky at the merchandise stand after shows, and will often earn up to a thousand dollars in one night from the jerky alone. He claims that he has made more money from his beef jerky than from his songs.

Besides Skrizzly’s dedication to stage performing, another reason to see him in concert is because of the unreleased music he plays. Many of the songs you will hear live are not songs that are out digitally. Skrizzly’s favorite song that he performs is called ‘Because It’s Wrong’. He wants it to be the first song on his debut album, and it is one of the few songs he has made that he truly loves. Skrizzly puts a lot of work into making timeless songs that capture a broader feeling, rather than a specific moment or time in his life. But ‘Because It’s Wrong’ has a lyric in which Skrizzly states he is twenty-two years old, and he says he wants to still be singing that song with that exact same lyric at a big stadium even when he is seventy years old.

Some of Skrizzly’s favorite artists include Van Morrison (whom he learned to sing from), Mick Jagger, Tom Petty, and Bruce Springsteen. Skrizzly says he is often compared to Springsteen, but he tries to strive for individuality and to not be too similar to any other artist. He believes his sound is unique, but slightly similar to certain alternative artists like the X Ambassadors. He also finds that a high number of his fans also enjoy hip hop artist NF. If these other artists interest you in terms of their lyrical content or their vocals, perhaps Skrizzly is an artist you should get familiar with. Some interesting news for Skrizzly is that his new video director is the same person who directs NF’s music videos, so this may be a new and cool direction for the content on his YouTube channel. Additionally, Skrizzly will be reaching out to hip hop artist Witt Lowry about the possibility of a collaboration.

Skrizzly Adams’ true goal with his music is to touch the hearts of listeners and give them a reason to believe. Before every one of his shows, he listens to the song ‘Reason To Believe’. This is what he wants to give his audience. He says if he can give one person in the crowd a reason to believe that life is worth it at the end of the day, then he has done his job. Single mothers, soldiers, and others going through personal struggles have reached out and told him that his music has touched them, and that is why he is doing music as a profession.

Skrizzly Adams is a kind-hearted man who produces soulful and catchy music. He is currently on the peak of becoming a star, and he looks forward to any new fans of any ages who may jump on board with his music. I sincerely hope that all Claytonites check out his music and follow him through his many upcoming releases. Big things are certainly ahead for Skrizzly Adams.