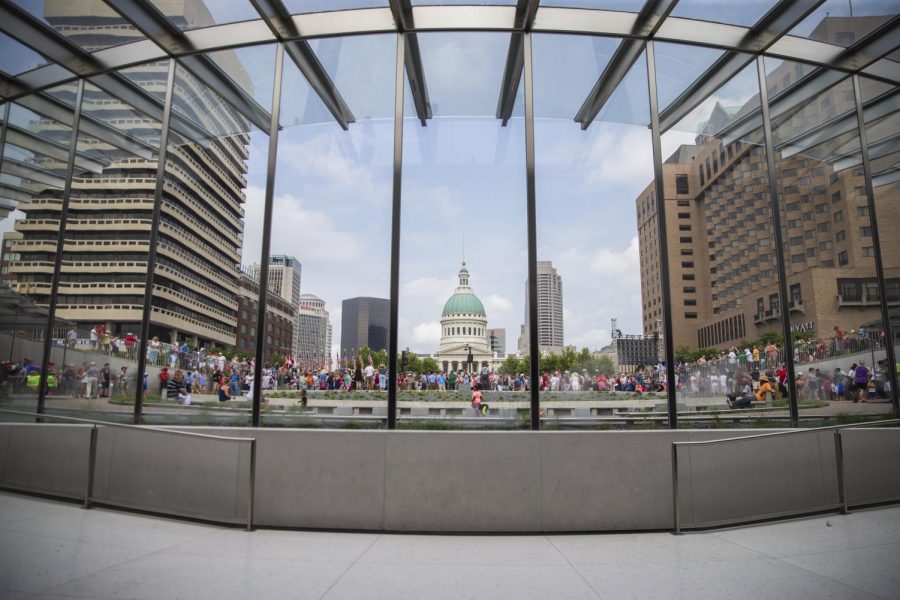 “For St. Louisans, the Arch really means home,” said Tom Nagel, the Communications Manager for the Gateway National Park Foundation. “When they see it from an airplane, or when they’re coming back on a road trip, as soon as they see the Arch, they know they’re home.”

Renovations on the iconic Gateway Arch were completed this past July, offering visitors a completely new and improved experience.

The Gateway Arch National Park, formerly the Jefferson National Expansion Memorial, was originally built as a make-work project started during the Great Depression. Hence the former name, it was built as a memorial to honor Thomas Jefferson and other pioneers in the westward expansion movement. While it has always been a unit of the National Park Service, the grounds are now officially a National Park.

The goal of the recent renovation was to make the park more accessible to the public and more connected to the city. Previously, visitors had to cross a parking garage and multiple lanes of traffic just to access the park.

“That really wasn’t a fitting entrance for something that’s so important to the city,” said Nagel.

The plan for the massive $380 million renovation was born out of The City + The Arch + The River 2015: Framing a Modern Masterpiece International Design Competition, which was won by landscape architect Michael Van Valkenburg in 2009.

According to the Gateway Arch Park Foundation’s 2018 update statement, “The Arch has long represented St. Louis’s efforts to look forward.” Valkenburg embraced this idea in his designs by creating an eco-friendly and sustainable system that not only helps the environment, but has also lowered the park’s maintenance cost.

The park now gathers storm water to use for irrigation, as opposed to bringing in water from the city department like they did previously. Before the renovation, a nitrogen fertilizer was used to treat the park’s plants; however, runoff caused algae blooms in the surrounding water. Now, a liquid biological amendment (more commonly known as compost tea) is made with spent grain from Anheuser Busch.

“The water is extracted from [the composted grain] and then the soil scientists kind of feed the microbes in that water and then lay it down within the soil. So the microbes are interacting with the root systems and with other organisms in the soil to produce all those nutrients that the plants want…in kind of a way that’s in harmony with nature,” Nagel elaborated.

He also hopes that this project will set a new precedent for collaborations. “For cities, towns, municipalities, and big infrastructure projects, [the renovations have] created a new model for how agencies and organizations can come together, create public private partnerships, and make things happen.”

Forward-thinking is not a new perspective for the park, however. During the Arch’s construction in the 1960s, new materials such as stainless steel and innovative engineering techniques were applied to create what Nagel referred to as “a world famous icon of modern architecture.”

“My dad described how while they were building the Arch in the 60s, they were also building jet engines and spaceships…it really embodies not just the past, but the forward looking optimism of the American spirit,” Nagel said.

Since its construction, the Arch has been a point of civic pride not just for St. Louis, but for all of Missouri. “People can go all over the world and say they’re from St. Louis and everyone knows that’s where the Gateway Arch is,” Nagel says. The Arch has become a unifying feature that people all throughout the state can identify with.

“The St. Louis region is very diverse — different people from all sorts of backgrounds live here, but everyone calls this place home. And the Arch symbolizes that,” Nagel added. “It’s really a magnet that brings everyone together and makes them proud to be St. Louisans.”

In addition to renovating the grounds, the history museum inside the Arch has also been redone. The renovation of the museum not only includes a change in architecture, but changes have also been made to what is being displayed inside the museum. The layout of the museum is different than before, just like the story it tells.

“We decided that the old museum under the Arch, the one that was torn out, did not tell the whole story that visitors wanted to hear,” said Robert Moore, historian for the National Park Service at Jefferson National Expansion Memorial in St. Louis.

Moore took the lead in deciding what would be displayed in the museum and making certain that everything put into all of the various text panels added up to an overall story that was fair and accurate.

“For me, the project began about eight years ago, when I brought together a group of scholars and historians to discuss the park themes and what stories a museum at this site should tell. We have some very difficult stories involving slavery and taking away land from American Indians and Mexicans, so I wanted to be sure that these groups were represented by historians who had studied them and the effects of westward expansion on them. Basically, having many stories meant that there were many perspectives, and thus we had to have many voices at the table,” Moore said.

The old museum portrayed the story from the time of the Louisiana Purchase in 1803 to the present day. However, people lived in this area long before that. Moore decided the new museum should start with the story of the mound-building Native Americans and the story of the French settlement of St. Louis.

“Whereas the old museum was a lot of generic stories about the westward expansion of the United States, this new museum is very much about St. Louis’ Paramount role in that part of American history,” Nagel said.

These galleries have been planned by exhibit designers Haley Sharpe Design, based on the information given by Moore and other historians.

They were in charge of designing many aspects of the museum, and also had to look at the way people use the space.

“We know from the past that most people come to the site to see the Arch and ride to the top. So many people do not know that the Arch stands for anything, and do not expect a museum. So the exhibit designers worked out a way for people to walk through the exhibits to reach the tram load zones to go to the top,” Moore said.

Another aspect of the design was increasing accessibility for people who have disabilities. There was work done to make it more accessible on the Arch grounds as well as in the museum.

“We set out to create the single most accessible museum in the United States, at least for the time being. Most people think only of wheelchair access when they think of accessibility, but we had a committee of people with various abilities in something we called The Universal Design Group who reviewed all of the exhibit ideas and pointed out ways in which we could make them more accessible,” Moore said.

One of the ways in which the museum is more accessible is that models of objects were created so that people who are blind can understand what it is like. There are also American Sign Language videos for the deaf.

The renovations of the Gateway Arch museum required a lot of effort, but the success is evident. While the true economic impact is not yet known, a variety of new features have been designed to attract tourists to the new space.

“The role of the Gateway Arch Park Foundation is really shifting from coordinating this construction project to being a conservator of the park,” Nagel says. “So we’re not just going to build the park, we really want to activate it as well.”

The grounds now hold new biking and running paths, a historical trail through the 90 acre park, and a number of public events throughout the year.

“Every day there’s something to do,” Nagel says. “Whether you’re learning about history, enjoying the park as a park, or coming down for a special event, there’s always something for you.”