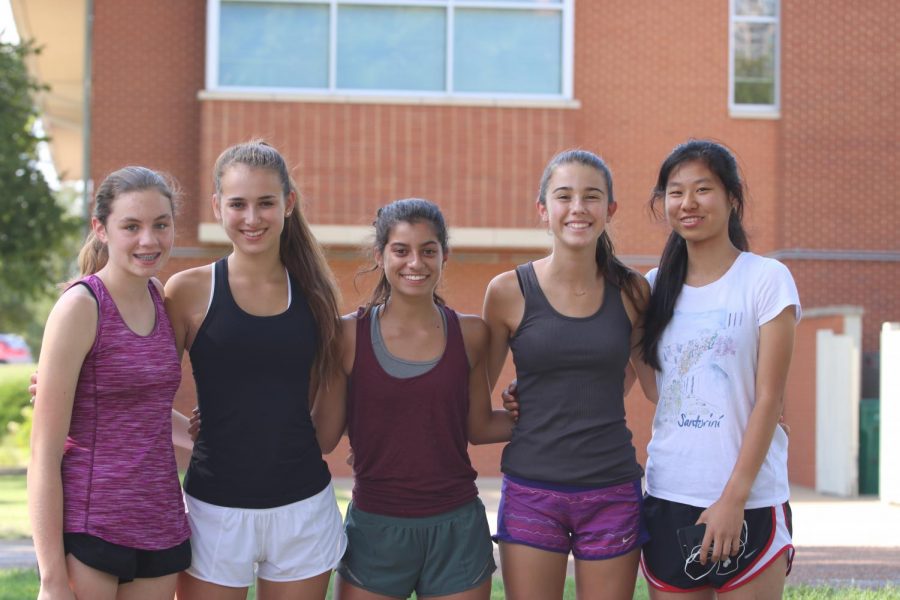 In the past few years, the girls’ cross country team has not been the most competitive in meets or in the district competition. On top of this, the team also lost a strong senior class last year. However, the team still hopes to do as well as possible in meets this season.  With many new runners and the few returning sophomores and juniors on the team, they hope to make this season a memorable one. Here are the top 7 girls.

Ruby Gallegos
This is junior Ruby Gallegos’ first year running cross country for Clayton High School, but she is loving it so far and has already made an impact on the team.  Gallegos placed first on the team in the First Capital Invitational Cross Country meet on August 31 with a time of 15:05 in the 2 mile race.

Favorite cross country memory: When Coach Crowe decided to perform the entire Wizard of Oz movie while we were running. We were all panting and exhausted and he was singing. It was really funny.

Goal(s) for the season: To just keep improving!

Sammy Williams
Junior and girls’ captain Sammy Williams joined cross country last year as a sophomore.  She ran many great races last year and also ran in the district race, having a positive impact on the team even in her first year.  Williams ran the two mile race in the First Capital Invitational with a time of 15:09, finishing third on the team.

Favorite cross country memory:  When I PR’d(broke my personal record) at Districts.

Ruthie Pierson
Sophomore and girls’ captain Ruthie Pierson is in her second year of cross country.  She was in the top seven last year, and was on track to run in the district race before injuring her hip at the end of the season. Pierson finished second on the team in the first meet, with a time of 15:06 in the two mile race.

Goal(s) for the season: To PR and run well in districts.

Camilla Meyers
Camilla Meyers is only a freshman in her first year of cross country, but she has already shown great potential both in practice and in the first meet, setting her up for a great season.  Meyers achieved a time of 15:24 in the First Capital meet, the fourth fastest on the team.

Goal(s) for the season: Build up my stamina to run longer.

Mira Upshaw
This is junior Mira Upshaw’s second year running cross country with Clayton High School, as she joined last year as a sophomore.  Last year she was in the top seven and did well in many meets, which she will hopefully continue this season. Upshaw placed fifth on the team in the two mile race at First Capital, with a time of 15:50.

Favorite cross country memory: Hanging out at the meets and supporting my teammates.

Goal(s) for the season: To improve my 5k times and hopefully win some meets as the girls team too!

Paige Rawitscher
Freshman Paige Rawitscher is a newcomer to cross country, but has been running on her own for fun since she was in third grade.  She has already made a great first impression on both the coaches and other runners. Although Rawitscher did not run in the first meet, she is on track for a great season.

Favorite cross country memory: When George Gelzer tried to jump a trash can on a run and cleared the first trash can but then did not realize there were two trash cans, not only one and fell over and knocked over both trash cans.

Carol Zhang
This is sophomore Carol Zhang’s first year on the cross country team, and she is on track for a successful season with the team. Zhang finished the two mile race in the first meet in 16:05, seventh fastest on the team.

Favorite Cross Country memory: Finishing the 4th hill circuit at Flynn park, running most of the way back, and hearing Jessie and Gabriel thank me for pushing us to go farther. I mean, I’m pretty sure “I hate you” is like the best form of gratitude one can receive.

Goal(s) for the season: To survive and hopefully get faster!