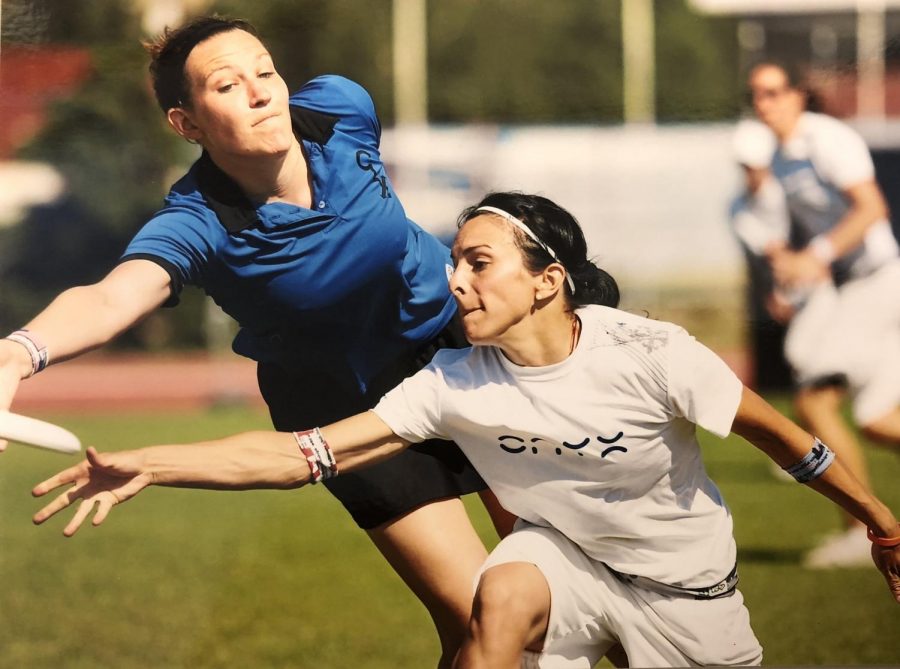 Lyons (left) dives for the disc during an Ultimate Frisbee tournament. Her team, called the Chad Larson Experience, took first out of 40 teams at the 2010 World Ultimate Club Championships in Prague.

To Kathryn Lyons, history teacher at CHS, Ultimate Frisbee is more than just a game played by college students in a quad. In 2010, Lyons competed in the World Ultimate Club Championship in the Czech Republic. She has watched the sport grow out of infancy in its struggle to gain athletic legitimacy across the globe.

Lyons began her ultimate career in college. Throughout high school, she had been very active in athletics, playing soccer, basketball and running track and cross country. However, she knew that it was unlikely she would be able to continue those sports at the collegiate level. Lyons still wanted to find a way to remain active and compete, so she turned to Ultimate Frisbee to fill that void.

Playing on the ultimate team in college required three practices a week, and one weekend each month was spent travelling to tournaments. These tournaments were usually two days long and four to five games were played each day.

After graduating college, Lyons began playing with a team from St. Louis. According to Lyons, there are four major club teams that play in the city, two of which are co-ed, called “mixed”.

“I really wanted to travel abroad and play Frisbee,” Lyons said. “So I switched teams.”

At the time, Lyons was dating was someone who was on a team called the Chad Larson Experience (CLX), named after an Ultimate Frisbee player at Iowa State University. CLX had placed second overall in the national tournament and had qualified for the world championship. Lyons was accepted onto the team, and during the summer of the following year CLX travelled to the Czech Republic to compete.

The tournament was hosted in Prague over the course of four days. When she wasn’t competing, Lyons enjoyed exploring the foreign city and was fascinated by the historical architecture.

Lyons played against teams from a multitude of countries, including teams from Japan, Australia and Canada. Because of the diverse backgrounds of the competitors, she feared that language barriers would make it difficult to play. Ultimate Frisbee is an unofficiated sport, meaning that players are responsible for calling their own fouls. However, Lyons found that many foreign players did know some English, and that communication between teams was manageable. Her team spent time socializing with the those from other nations, and even exchanged jerseys with other players in a gathering on the last night.

The CLX played a Canadian team in the final round for the title of the mixed division. After a hard-fought game, Lyons’ team emerged victorious.

“You work so hard all season to prepare physically and mentally for it, and to see it finally pay off was an amazing feeling,” Lyons said. “I was elated, thankful I was part of the experience and had the opportunity.”

Despite the variety of nations that competed, the teams from the U.S. remained dominant in most divisions. According to Lyons, Ultimate Frisbee is still considered a primarily American sport. However, since the 2010 competition, as ultimate has gained legitimacy as a sport, international teams have become stronger.

Lyons continued to play for a few years after her victory in Prague, but since she had her second child she has not been able to play as much as she wanted. She has considered coming back to the sport and playing in the older Masters Division or returning as a coach.

Through her Ultimate Frisbee career, Lyons has traveled the world and met new people, including her future husband. She would become engaged to her boyfriend on the CLX one week before the world championship.

“It can lead to big things,” Lyons said. “That’s what I enjoy about Ultimate. Regardless of the level of competition, at the end of the day you’re all just humans, coming together, competing and having a good time.”