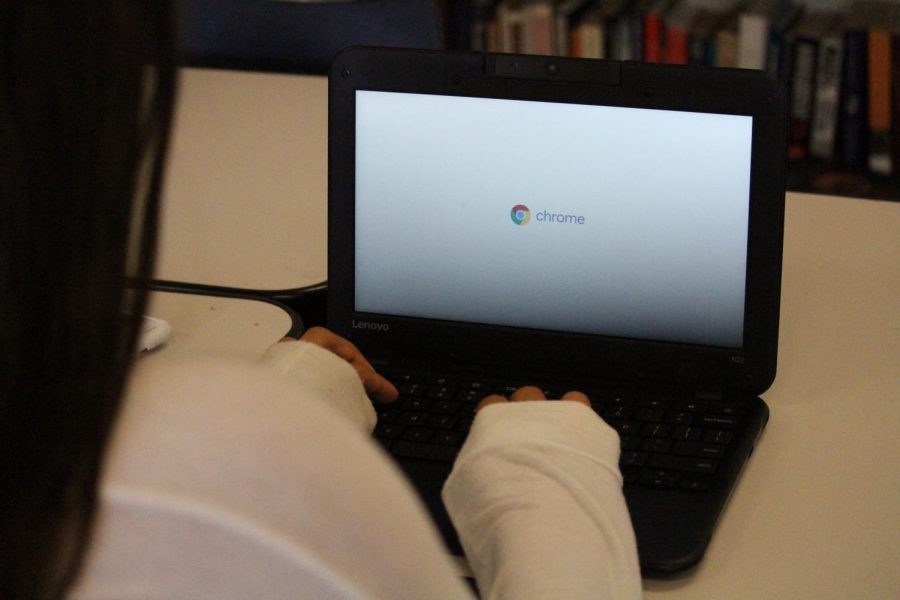 CHS students were issued individual Chromebooks this year as part of a new one-to-one computer policy implemented by the district.

Young children under the age of nine spend at least two hours a day on screens according to a report by CNN. This use is for leisure but also to help enhance academic abilities. While many students are used to learning through technology, others thrive on engaging with others face to face.

For the first time this year, each Clayton High School student was given their own chromebook to take to and from school. Chromebooks are Google operated laptops that are very portable. This makes it easy for students to carry these devices around in their backpacks, transporting them to and from school.

While chromebooks are useful in helping students complete their homework and do activities in class, many kids and teachers aren’t fond of using this much technology, as most of their daily lives are already spent staring at a screen.

There has recently been much debate over whether or not schools should include technology in their day to day routines, and some schools are beginning to branch out from the norm.

While technology is a major part of education at Clayton High School, other schools, such as John Burroughs, have strict policies against the use of these devices at school.

At Burroughs, students aren’t permitted to use their cellphones any time between the first bell and the last bell, and are only allowed to use computers when their class is signed up to use a lab. If these policies are dishonored and warnings have been issued, consequences are enforced.

Julie Harris, the assistant head of Burroughs and principal of 7th and 8th grades, discussed the effect that this rule has on the students during school. “When you walk through our hallways and walk around our campus, students are engaging with each other,” says Harris. “[When students are not in class] they’re doing things that promote relationships.”

Students’ ability to cooperate and collaborate amongst each other is a very crucial life skill to have. Decreasing the use of technology is definitely a step in the right direction towards more personal interaction between students.

Though this environment created at Burroughs seems very extreme, Harris says, “For the most part, the community understands the reason for the policy and they adhere to it.”

In the past few years, some educators have felt a shift in how much people, especially teens, rely on cell phones and other forms of technology everyday. John Ryan, an English teacher at CHS, started teaching 23 years ago and has noticed a significant change in regard to the use of technology at school by teens.

“We have fewer face to face forms of communication [than in the 1990’s]… Students would just come by [during] a free hour and they’d want to chit-chat. It could be about class, it could be about anything. I just see far less of that [now],” says Ryan.

He also discussed how people, students specifically, used to be more interested in the outdoors and community service, while now they are more focused on impressing colleges by filling up their schedules and staying socially connected.

Ryan not only discussed the culture at Clayton, but truly anywhere you go in today’s world. “It’s not unusual to see someone with their phone in hand, walking down the hall, totally unaware of anybody else walking by.”

He believes that the increase in technology may be prohibiting the development of significant conversations. Ryan says about conversations in the classroom specifically, “I only use [technology] for things that are just meant to be engaging and open the door to something deeper. But if we never go to that deeper place in a classroom, we’re cheating ourselves of what human interaction could be.”

Technology not only seems to be limiting human interaction, but can take a toll on the social lives of teens as well.

Recently it seems that “every day is picture day,” says Harris.

Students worry about their physical and online appearances, and as Ryan accurately describes, “Students are trying to lead a virtual life and a real life.” The effects of these two lives are apparently very noticeable to adults on the outside. Students are visibly more stressed and aren’t able to delve into the deeper conversations they once were able to have. Ryan describes the potential cause of this by saying, “Overall, the ability to get people calm, and focused, and unplugged… that’s a battle.”

A student at CHS, Danielle Oren, says, “Technology has really improved my happiness, but also makes me depressed sometimes because people can be really mean [on social media].” Like Danielle, other students feel similarly towards technology. While they enjoy using it, many also say that things happening on social media specifically can be somewhat of a distraction from more important things such as the deeper conversations that Ryan discussed.

But what is the solution? Do we eliminate technology from our lives or do we continue to depend on it for practical purposes? “I don’t think that there are any cut and dry answers,” says Harris, “I don’t think there is any one way to do it well.” Perhaps the best thing to do would be to let students figure out how to manage their two lives on their own. Ryan says, “I would almost rather students learn to manage their screen time themselves. How can we give them the tools to manage that?” For some, there may not be an answer to this question, but for others, Harris explains why, at Burroughs, it is important to “give kids an opportunity to take a break and take a step back from texting and social media because it can be consuming.”

Ryan says, “We are more connected, yet at the same time we’re more isolated.” How can we build bonds between other people in today’s society and tear down the walls building up between us? “It’s important for all of us, not just teens, but all of us to unplug for a while,” says Harris. Without a doubt, technology is limiting us from having in-depth conversations with one another, but is it really possible to limit screens from our daily lives?

“I guess we just need to be human to each other,” Ryan says, “It’s a tough time. I think the more face to face [interaction], the more we can engage that way, the better off the whole country is quite honestly.”