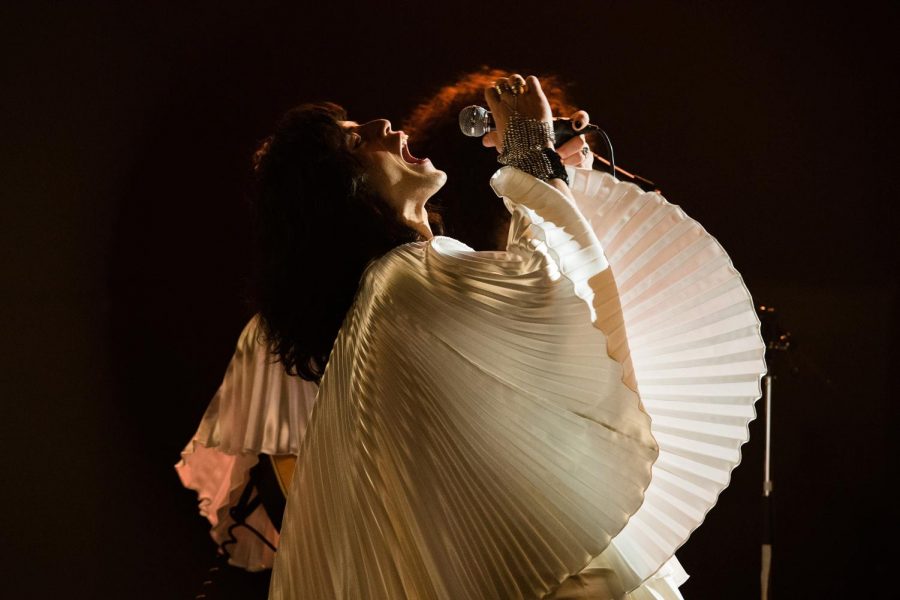 “Bohemian Rhapsody” was released Nov. 2 in the US, featuring Rami Malek as Freddie Mercury. As a huge Queen fan, I went into the theatre with very high hopes. Sadly, I was rather disappointed.

The movie’s introduction shows the preparation for Live Aid, a concert that was held to raise funds to provide relief for the famine in Ethiopia. It then flashes back, showing Mercury as a baggage handler, doing a poor job of loading suitcases off of an airplane. This is meant to show Mercury as an outsider, among the “lowest” of the “lows”. Later, Mercury is at home, leaving right as the family is about to enjoy dinner together. This sparks evident disapproval in his parents, especially his dad, who’s disapproval of his son supposedly gives him a chip on his shoulder.

The rest of the film talks about the formation of the band, Mercury’s inner battle with himself about his sexuality, AIDs, the conflict pushing the band members apart, and lastly, their historical performance at Live Aid. It’s a lot to put into 2 hours and 15 minutes, so props to the producers for being able to pull that off. However, this doesn’t change the fact that this movie was rather subpar.

Despite Rami Malek and Gwilym Lee’s convincing performances as Mercury and May, the film did not feel like “Queen” to me.

The film wanted conflict and some sort of plot, so plenty of the scenes with the whole band just show them at each other’s throats. While it’s true that they fought a lot, a big part of them getting back together at the end is because they are a “family”. The idea of them being a “family” isn’t very believable upon seeing this movie. Furthermore, in the scenes where they do get along, it feels fake. We are supposed to feel like the members have a special bond between them, but when they hug and rejoice together, it all feels staged.

John Deacon was known as the very shy member of the band, and while Joseph Mazzello certainly captured Deacon’s adorable awkwardness, he didn’t quite get the “quiet” part. Additionally, Ben Hardy, who plays drummer Roger Taylor, nailed the roguish aspect of his role, but he made Taylor very unlikeable.

Additionally, the lack of attention to history was distracting. With band members Brian May and Roger Taylor supervising the creation of this movie, I hoped that they would accurately depict the band’s journey to fame.

While watching, we get to look into the creation of “We Will Rock You”, which was released in 1977 in the “News of the World” album. In the movie, Mercury is shown with his signature mustache during the making of the song, which doesn’t make sense since he got his mustache in the ’80s.

Also, Mercury was diagnosed with AIDS in 1987, two years after Live Aid. However, long before the concert begins, Mercury finds out that he has AIDS and tells his bandmates a week before their performance. This was so they could end the film at Live Aid since that was the peak of their career, but by doing so, they leave out the Innuendo album, one of the band’s most bold statements put into music.

Moreover, I disliked how much the film focused on Mercury and his personal life. When you title a film “Bohemian Rhapsody,” it is typical to expect it to be about Queen’s music. However, barely any of the film’s focus was on that. They may as well have titled it “Freddie Mercury and the Other Three.”

However, I loved the little snippets of other, less-known Queen songs throughout the film since they brought some of the focus back to the music. It wasn’t enough for me to truly like the film, but it much more enjoyable.

In conclusion, I disliked the film. The only part that I really enjoyed was the Live Aid concert, which lasted for about 7 minutes in this 134-minute long movie. Overall, the relationships felt fake and the conflict didn’t tug at my heart and bring tears to my eyes. The film was mediocre and does not do the actual band Queen justice.