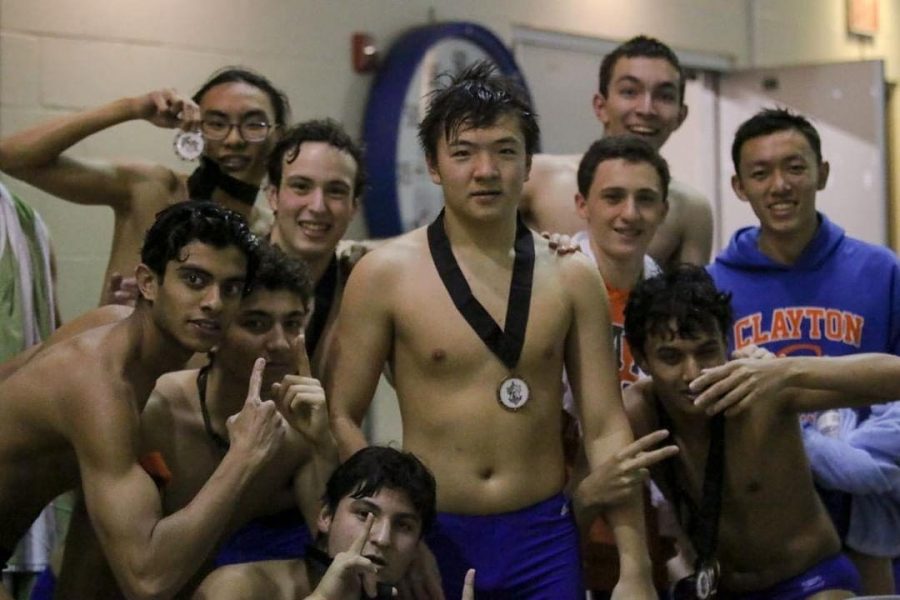 The boys' varsity swim team poses after their first place finish at the conference meet on Wed, Oct. 24. Many swimmers will move on to the State Championship based on their performance on Wednesday or their earlier qualifications.

The Clayton boys’ swimming and diving team has yet again concluded with a phenomenal ending to their 2018 season. A few weeks ago, the team competed in the preliminary heats of the Suburban Central Conference meet and they did not disappoint.

The team is returning the top placed swimmer in all but two events. Highlights of this conference include Koji Barrette, who swam the first leg of the 400m freestyle relay with a time of 48.97s, which breaks a 32-year-old school record and marks the first time a Clayton swimmer ever broke the 49 second barrier in the 100m freestyle.

Furthermore, the team qualified all three relays for state, along with a variety of individual state cuts. All in all, the swim team brought the biggest state team that Clayton has ever brought to state. Although these accomplishments were outstanding, they were not the true highlights that the team achieved this year.

Surprisingly, the true team highlights were not so much in the sport itself, but in the people of the team.

Koji Barrette, a junior on the team, said, “The team bonded together through Chipotle Tuesdays, a long-standing tradition we have, as well as ultimate frisbee games with the cross country team.”

Barrette also mentioned how the team bonded together through their season struggles and losses. “Our team’s struggles were mainly in our two losses to Ladue and Parkway South,” said Barrette. “I also feel like we struggled in our planning for the pep rally, and especially when the new practice rule was put into place and we lost many swimmers.”

The practice rule Barrette mentions is the new nine day practice rule implemented by the athletic department this year, which states that athletes cannot miss more than nine days of practice, and excused absences count towards the rule. This created controversy within the team, since many swimmers wished to participate in sixth grade camp, and as a result, a few swimmers left the team.

“If there was one thing I could change, it would be the number of people on the team,” said senior and captain Wil Welch. “I know if we had more people we could have won the meets we lost, like Ladue and Parkway.”

However, ultimately, this brought the boys’ swim team even closer together, for they were able to surge past these struggles and swim to victory. “It was awesome to have so many people swim at state.” said Welch.  “Almost all of the seniors swam at state this year. We also got 10th place and more points than last year. It was great.”

There are also various moments where the team can share a laughter. After the victory at the regional conference, the swimmers cheered Head Coach David Kohmetscher’s name on the deck. It is a tradition for the coach to jump into the pool after winning the conference. Unlike two years ago, where the coaches were pushed into the water by the swimmers, Kohmetscher jumped in himself. Additional swimmers jumped into with him to celebrate the success of the season.