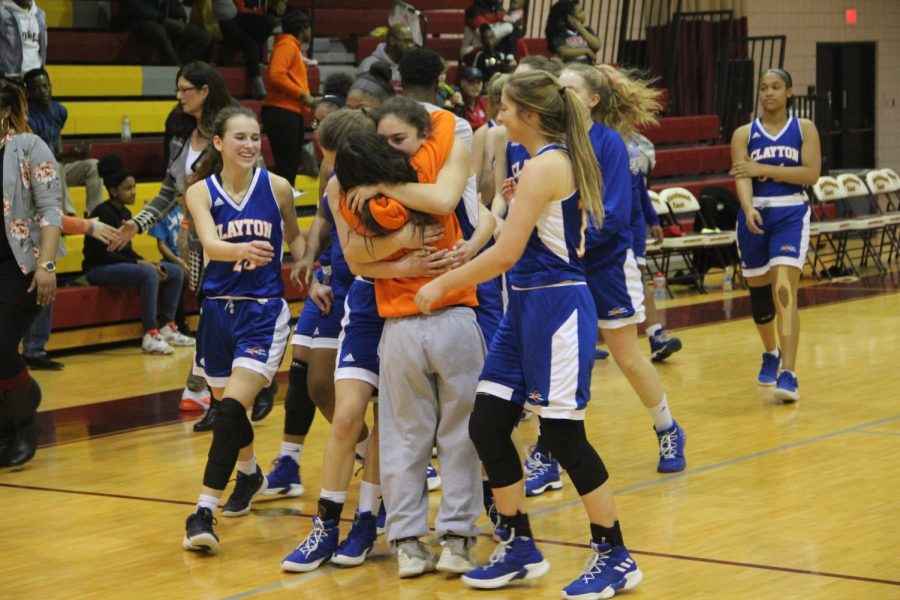 Juniors Sammy Williams (left) and Sara Litteken share a celebratory hug as the rest of their teammates run up to join in, after beating Jennings 38-26 in the Class 4 District 6 Championship Finals.

Exactly two years ago to the day, the CHS girls’ varsity basketball team won Clayton’s first Class 4 District Championship in 29 years, and March 2, 2017 became a day that would go down in the record books. Fast forward two years to 2019 and the girls’ basketball team has another opportunity to make March 2 a day to remember for the rest of their lives.

On Saturday, March 2, the CHS girls’ varsity basketball team faced Jennings High School in the District Championship. CHS and Jennings entered the game as the second and first seed, respectively.

Although the Greyhounds entered the game as the underdogs if one were to look at the rankings, they believed they were the better team.

“Before the game, we knew we should win. We had prepared a lot. We basically had the same record as them so we knew that we deserved to win, and we were just really motivated to try our hardest and try to beat them,” sophomore Regan Wade said.

The Hounds went into the game strong and took an early lead. However, the nerves quickly set in and CHS began to struggle.

After the first quarter, the nerves went away and Clayton was determined to regain the lead.

“In the second quarter, we were just focusing on trying to get back the lead,” Wade said. “We finally started to catch up to them. It started to get exciting. We were making some good plays and forcing the other team to turn it over.”

During the final seconds of the second quarter, senior Destiny Downs scored, and the Hounds took the lead going into the second half of the game.

Throughout the second half, the game remained close.

The Greyhounds were successful and won the District Championship 38 to 36.

“It was exciting. All I saw was the ref call the game off and I blacked out and turned to Mira Upshaw and gave her a huge hug. We all ran to Coach Knight and gave him a big hug just because we were all so excited,” junior Sara Litteken said. “We had worked hard all season for the game, and we were just so happy to achieve our goal of winning Districts.”

Litteken led the Hounds throughout the game and was instrumental to the win.

“Sara controlled the ball. She’s the point guard so she really had to calm us all down at times,” Wade said. “She’s the one that led all of the passes and started all of the plays. She also knocked down two three-pointers in the second quarter that cut down Jenning’s lead a lot and gave us a lot of momentum.”

Although Litteken helped lead the Hounds during the game, all of the players were essential in the victory.

“A win is not a win without the entire team,” Littken said. “I might have made two plays that stood out, but everyone contributed as much as I did.”

Clayton hopes to use Saturday’s win as momentum and motivation going into Sectionals. CHS plays against Parkway North at 8:00 P.M at Parkway West High School on Tuesday, March 5.

“After Saturday’s win, we were pretty immediately focused on our next game. The win confirmed to us that we are a capable team,” Litteken said. “We are capable of beating good teams and playing our game. We can play our game and succeed doing that.”

The Hounds plan to enter Tuesday night’s game with the same determination they entered the District Championship game with.

“Before every single game, in the locker room right after Coach Knight talks about the game plan, we all stand in a circle holding hands and then visualize what we want to do during the game,” Wade said. “It is just 30 seconds of silence. We are all just closing our eyes and thinking about what we want to do that game. We then go onto the court after that. We never talk about what each of us thinks about, but on Saturday we could tell we were all visualizing us winning the District Championship.”