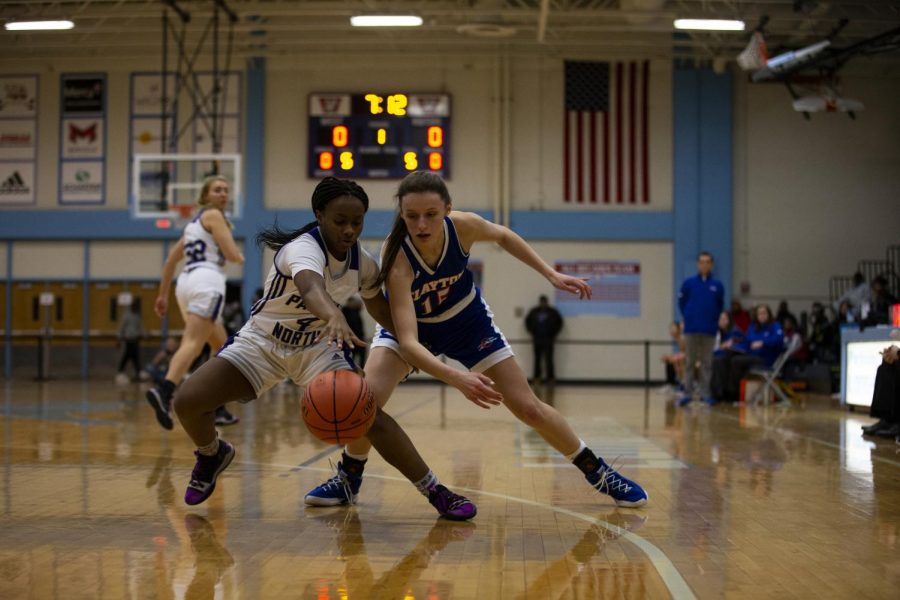 Parkway North Sophomore Aliyah Williams (4) attempts to steal the ball from Junior Mira Upshaw (15) during Round One of the MSHSAA tournament against Parkway North at Parkway West on March 5, 2019.

The Clayton Girls Basketball will not be going to round two of the MSHSAA Sectional tournament.

If this feels like deja vu, it should.  The Clayton girls basketball team faced a similar fate of defeat in the first round of sectionals back in 2016.

With Tuesday nights 61-37 loss to Parkway North at Parkway West, the greyhounds ended with a record of 16-11.  Still one of the best sports at CHS, their advancement in the MSHSAA tournament marks one of the farthest playoff advancements of Clayton teams this year (so far).

The loss, to a team with a 22-6 record going into tonight’s contest, was scarcely diminished by the ability of North’s star player, Je’Naiya Davis (#12), who dropped 17 points in the first half.

During the first quarter, the greyhounds struggled to capitalize on important plays and make necessary shots.  The second quarter didn’t see a change as the greyhounds were down by double digits at the buzzer.

After the half, the game slowly drifted away from Clayton as North’s lead grew.  Early in the 4th quarter the greyhounds began taking out starters and making various substitutions to finish out the game.

“It was a tough opponent.  They shot the lights out for three.  They just kept raining them in. We had somebody playing tight defense against them and there was no hitting shots.  We just couldn’t guard everybody,” Head Coach Michael Knight said.

The greyhounds came nearly twenty-five percent under their average 47.4 ppg with only 37 points, while their points allowed surpassed their average of 41.6 points with 61 points.  In short, the greyhounds couldn’t hit the shots they needed and keep away the ones they didn’t.

Despite Clayton having the second worst record going into the sectional tournament, there are high hopes coming out of the season.  The girls who assisted in the 2016 sectional run will now become seniors have two district titles under their belt along with another year of player development.  Additionally, the greyhounds will lose two seniors this year, Mia Thomas and Destiny Downs.

“[I’m] very proud.  These girls were in support roles two years ago for that group of seniors and now this one, I feel like this was theirs that they earned,” Knight said.

They did earn this one.  Junior forward Mira Upshaw’s block at the very last minute sealed Jennings fate in the district championship and brought the greyhounds to face Parkway North in the sectional tournament.  Upshaw continued to perform well in tonight’s game. Scoring fifteen points, nearly 40% of the teams total. Sara Litteken trailed with 9 points, second on the team in tonight’s game.

Upshaw and Litteken will both be returning to the team next year and for another shot at the sectional tournament. Undeterred by tonight’s loss, the grouhounds look to next year as another opportunity to move farther along in the bracket, something no greyhounds girls basketball team has ever done.

“I believe [we will make it back next year].  I have a strong belief that we will get to this point and our goal is to move beyond,” Knight said.