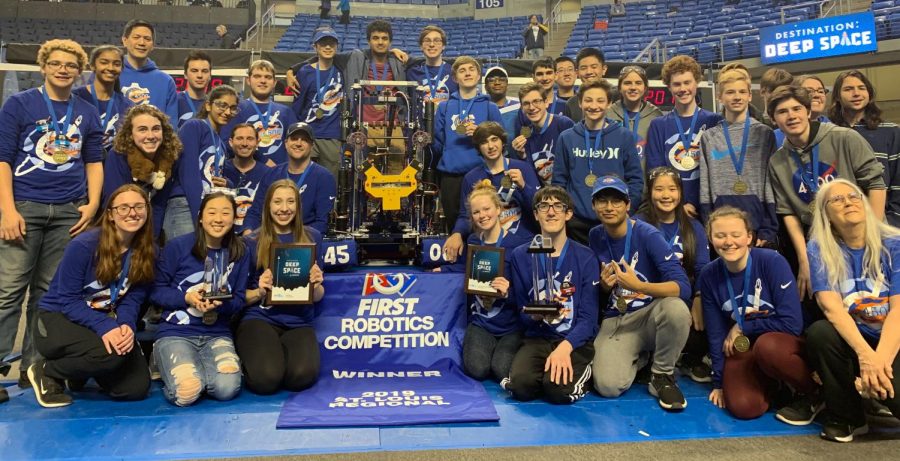 The 2019 CHS Robohounds pose for a photo after their victory in St. Louis.

The CHS Robohounds (team 4500) returned to Chaifetz Arena in St. Louis this weekend to win their first regional title since 2014. After six weeks of designing, building and programming, the team brought their finished robot to compete in the 2019 FIRST Robotics competition, DESTINATION DEEP SPACE.

“It was pretty unbelievable, I honestly didn’t expect it to happen,” team captain Zach Fisher, senior, said. “We never come to competitions thinking we’re going to win it all. We always come in with the mindset of trying our best and go forward from there.”

At the conclusion of their qualification matches, the Robohounds sat in 12th place, with a record of 8-2. During the elimination rounds, the top eight teams each draft two other robots to join their alliances. The Robohounds were selected first by the captain of the No. 3 alliance, team 1501, and joined by team 6391.

To advance during elimination rounds, an alliance must win against an opposing alliance twice. The Robohounds’ alliance went undefeated, eventually beating the the 1st seeded alliance in the finals to secure the regional win. The Robohounds’ alliance also set the high score for the St. Louis regional, scoring 100 points in a single game. For perspective, the average score during playoff matches was 66 points; 44 points during qualification rounds.

Having competed at a regional competition in Oklahoma City the previous weekend, the team had some experience playing the game. In Oklahoma, the Robohounds initially struggled, facing several mechanical and electrical issues that needed to be addressed. However, they eventually found their rhythm, finishing 25th out of 62 teams with a record of 4-4-1. Selected as team 2354’s second pick to join the No. 7 alliance, the Robohounds were eliminated during quarterfinal matches.

As well as winning the regional title in St. Louis, the Robohounds were awarded the Excellence in Engineering Award, influenced heavily by the team’s use of swerve drive. This unique drivetrain configuration allows each wheel to be powered and turned independently of the others, adding increased maneuverability and agility.

During the Robohounds’ 2018 season, the team experimented with swerve drive for the first time. Because of its added complexity, both in design and programming, the team struggled during that year’s competition, FIRST POWER UP.

However, after months of modification and improvement, use of swerve drive gave team 4500 the edge needed to succeed in competition, an effort noticed by competition judges.

“I’m super proud of the robot,” robotics coach and CHS engineering teacher Steve Beauchamp said. “I think it’s the best robot we’ve ever built, and it certainly showed that at competition. I’m really proud of the team, of the way everybody pulled together and tried to think outside of the box and think of different ways we could be successful, and obviously it all paid off.”

The victory in St. Louis gives the Robohounds the opportunity to compete against the top robots and teams from around the world at the 2019 World Championship in Houston this April. The team looks forward to the challenge and the chance to continue playing with their robot.

“We faced some challenges this season,” team captain Ravi Cohen, sophomore, said. “We had a lot of different interpretations of how we wanted to play this game, but the robot turned out well because everyone trusted each other and worked really hard to make sure we achieved our goal.”