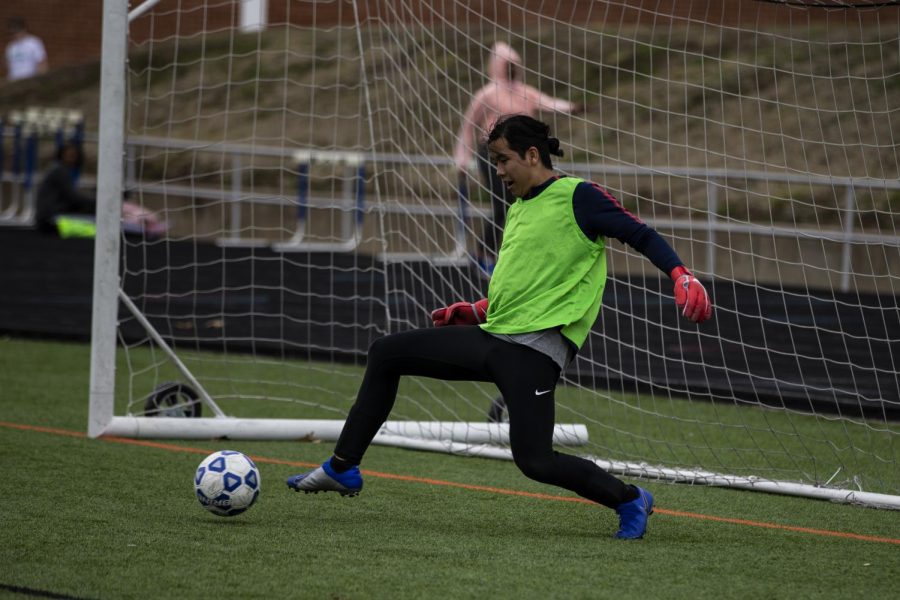 Taghert is the first known Missouri transgender high school athlete to receive eligibility to participate in MHSAA athletics on the team that matches the athlete’s gender identity.

From freshman to junior year, Taghert played in the CHS boys’ soccer program.

Now she is a member of the CHS girls’ varsity soccer team.

During her sophomore year, Taghert desired to make the switch from boys’ soccer to girls’ soccer because her gender identity no longer matched with the boys’ team.

“We had initial conversations and met with her and her family and laid out a game plan. Obviously they had to supply a lot of the medical information, but we did have to submit the application. Dr. Gutchewsky was involved with making the recommendation and making the initial request,” CHS athletic director Bob Bone said.

In November 2017, Taghert’s application to play on the girls’ soccer team was submitted.

As Taghert was the first CHS transgender athlete to apply for eligibility, the process was a learning experience for her and the school district.

“I was really curious, and I was very interested because I was not familiar with the process. The more I learned and got into it, I found it a very interesting process and one that I felt was very positive for the athlete involved,” Bone said.

“They rejected me to play junior year because I was not one year into hormone therapy.” Taghert said. “Also, I played for the boys’ team that fall, and MSHSAA’s policy is that you can’t play two seasons of the same sport within an academic year.”

Boys’ soccer is a fall sport, while girls’ soccer occurs in the spring. Since Taghert played on the boys’ team in 2017, she could not play another season of soccer during the same academic year.

Whether or not the male transgender athlete is receiving hormone treatment, he is eligible to participate in a boys’ sport.

MSHSAA declined to comment on policies and methods in place for dealing with transgender athletes.

Other states, including Wisconsin and Illinois, have a policy similar to MSHSAA regarding transgender athletes.

Another group of states requires the high school athlete to participate on sport teams that match the athlete’s birth certificate gender. For example, Texas and North Carolina have such a policy.

California and Connecticut fall into the category of states that does not require the athlete take hormones or have surgery before a transgender athlete can play on a team that matches their gender identity.

Before granting her eligibility, MSHSAA required Taghert to undergo one year of hormone therapy. In addition, Taghert had to submit a letter from herself, a parent, a trusted adult and a therapist.

“The letters confirmed that I had gone through one year worth of hormone therapy and confirmation from mental health experts or experts in the field that what I was doing adhered to [MSHSAA] policy,” Taghert said. “Other steps including documentation provided by the treating physician.”

During this more-than-year long process, Taghert and her family worked closely with the athletic department and school district administration.

Taghert said, “It was all a combined group effort. All of the administration as well as the athletic department worked with me making sure that all the application materials were in order. The school district has been very helpful, especially Mr. Bone, in staying in contact with MSHSAA representatives and making sure the process went along as smoothly and productively as possible.”
Taghert’s family also served a vital role throughout the process.

In addition to acting as a support system for their daughter, they worked with those who provided documentation to make sure all the paperwork was in order and submitted on time. Also, they ensured that Taghert was on track to meet eligibility requirements.

“We worked very closely with the school and the athletic department. I relied on Bob Bone for guidance, and he helped lead us through the process. We had meetings with Bob Bone, Dr. Gutchewsky and Dr. Luhning,” said Anneliese Schaefer, Taghert’s mother. “There was close communication between Bob Bone and Dr. Gutchewsky. They would then communicate directly with MSHSAA. The school was extremely supportive and very responsive. They were definitely advocating for Nicky throughout this process.”

The hard work paid off for Taghert, her parents and the school.

“When I found out Nicky would be allowed to play, I was ecstatic. I was so excited. This decision is huge and so many aspects of it shouldn’t be overlooked because it is so important not only for sports, but for everyone who is transgender, or questioning gender or gender fluid to know that Clayton High School and the entire district is extremely supportive of these kids,” Schaefer said.

Taghert had a similar reaction when notified of her eligibility.

“I feel happy to be able to play for the team that best fits my gender identity and that I can play, that is what’s most important to me — playing the game that I love,” Taghert said.
Although this is Taghert’s first year as a player in the CHS girls’ soccer program, she already feels part of the team.

Taghert’s transition to the girls’ team has also been smooth with the players on the squad.

“Nicky was a manager for our team for the past few years, so she has always been present at practices. She would help with the goalies and be around the team, so it has been easy to have her as a new player on the team because she has been with us so often,” Eliza Copilevitz, senior captain of the girls’ varsity team, said.

Taghert’s parents are excited to be able to watch their child once again play the sport she loves.

“Just like any other player, I will be out there cheering her on. To me, at that point, it’s not that Nicky is my transgender daughter, but my daughter, and I am really excited that I will get to see her play this year,” Schaefer said.

Taghert has not received negative comments from players, coaches, or opponents, but she and her team, along with the school district, are prepared to handle such a situation.

Throughout the application process and now as a member of the girls’ team, CHS administration has regularly communicated with Taghert to ensure that she feels accepted.

“We are here to support Nicky and help her every step of the way. If another team were to begin directing hurtful comments to Nicky, we would just take Nicky away from the situation, reassure her that she is accepted, welcomed, and has our full support,” Copilevitz said.

Bone also wants to ensure that Taghert has a positive experience as a member of the team.

“What we really want is for her to have just a normal experience, like any other student who participates in girls’ soccer. We want a consistent experience for the people on that team,” Bone said. “Inclusion, which is something that we always value, is very important to us. Our whole athletic philosophy is about participation and opportunity and this is very much down that line. She has the opportunity and she will get to participate because that’s what we believe in. It’s really exciting for us.”

After high school, Taghert plans to continue playing soccer. She is currently in the recruiting process, which means attending showcases and communicating with coaches at the college level. At the Division I level, colleges recruit players before their senior year.

Taghert said, “I didn’t play for a girls’ team my freshman, sophomore, or junior year, so it’s hard for women college teams to scout me or even for me to put myself out there as an athlete hoping to be recruited if I’m not playing for a girls’ team.”

For Taghert, it has been difficult starting the recruiting process during her senior year as opposed to the beginning of high school.

Taghert remains hopeful that she will continue her soccer career at the collegiate level.

Taghert said, “I want to inspire myself, not just from what other people are doing, but in my own way.”