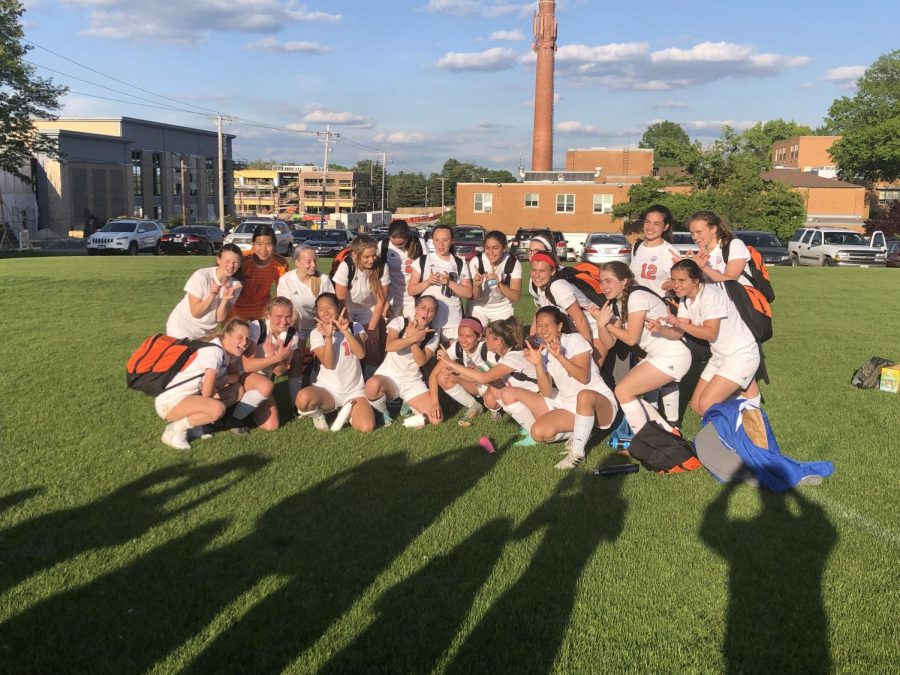 The game was tight throughout the first half. Both Ladue and Clayton had some close chance to score. About halfway through the first half, Ladue scored a goal. The Greyhounds pushed hard the rest of the half but were unable to score.

After a long half-time pep talk from head coach, Tom Redmond, Clayton bounced back in the second half.

About ten minutes into the second half, senior Eliza Copilevitz was in the attacking end with the ball. Copilevitz volleyed the ball to senior, Devin Froelich. Froelich was able to quickly receive the ball and pass it to Regan Wade. After dribbling through a few defenders, Wade was able to volley the ball into the net, just over the Ladue goalkeeper’s head.

Wade described the moment. “It felt unreal. I was not sure the ball even went in. When I realized the ball actually went in the net, I was thrilled. It hit me that we were back in the game, and that we had a chance to finally beat Ladue.”

Clayton and Ladue remained scoreless throughout the rest of the half, forcing them to go into overtime.

After two scoreless fifteen minute periods of overtime, the game went into penalty kicks. Each team chose five players to take a penalty kick against the other team’s goalie.

Clayton chose to have Copilevitz, Lauren Wolff, Nicky Taghert (even though Taghert was also the goalie), Sara Litteken, and Froelich each take a penalty kick.

First was Copilevitz. She shot the ball past the Ladue goalie. Next, was Ladue’s turn. Ladue scored.

After that was Wolff. The Ladue goalie was able to save Wolff’s shot. Ladue then scored once again.

Next, was Taghert. Taghert was able to score off of a shot on the right side of the goal about halfway up the goal. Taghert, back in goal, then made an amazing save off of the third shot from Ladue.

It was now Litteken’s turn. She was able to place the ball right at the top of the net, out of the  goalie’s reach. A Ladue player walked up to the penalty kick line, hoping to tie the score. However, the ball hit the post and bounced off.

Clayton was now leading 4-3. Froelich then walked up to the 12 yard line. All she had to do was score and Clayton would win. Froelich shot the ball. The ball went to the top right corner of the net. The goalie was unable to block the ball.

All of the players along the sideline and those that had just shot sprinted to Froelich and together team celebrated.

Froelich describes how she felt during the moment as, “it was all a blur and so surreal. I am so happy I was able to do this for my teammates. It’s one of the best moments I have had throughout high school.”

Clayton beat Ladue for the first time since 2012.

The Greyhounds moves onto the Class 3 District 4 championship game against St. Joseph’s Academy on Wednesday.