Juniors, Ethan Mayer and Theo Bockhorst share their experiences of playing the violin 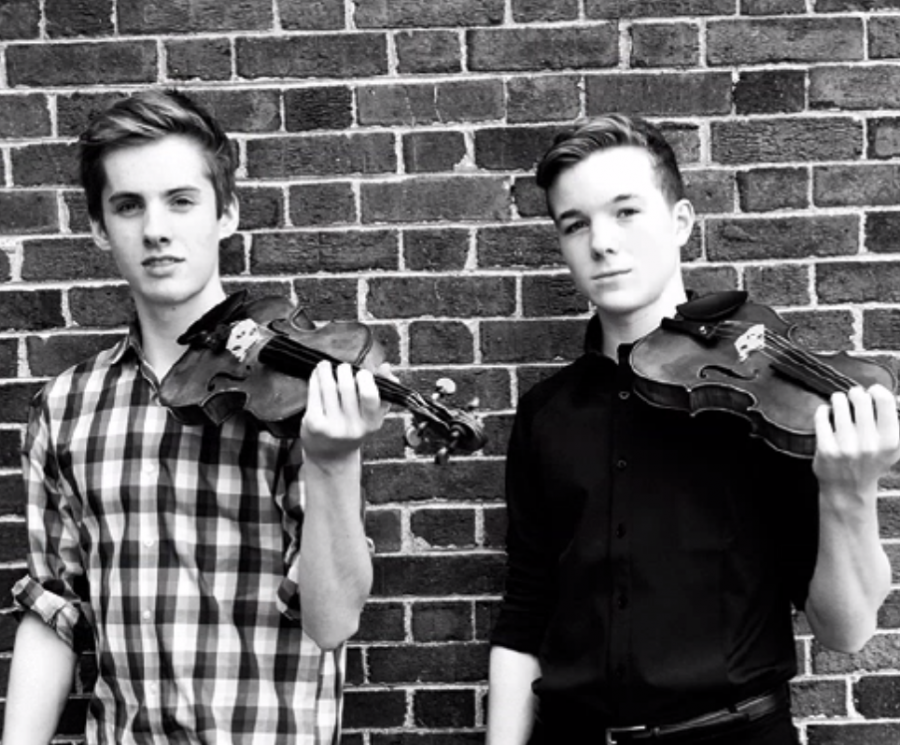 Ethan Mayer and Theo Bockhorst are two juniors at Clayton High School who both play the violin. Together, they started charting their violin progress on Instagram and collectively have over 24k followers spanning their individual accounts: @ethanviolin and @practicemakes_violin85 and their joint account @ethosviolin.

Music has always been an integral part of both students’ lives. Mayer has been playing the violin for 11 years and Bockhorst for 13.

“I actually started on a cardboard violin so I could learn how to stand and hold it. My dad carved it out of a cereal box,” Mayer said. Bockhorst also discovered his passion at a young age.“I started the violin when I was four. My mom took me to Bearden’s Violin Shop to try out a bunch of stringed instruments. I don’t know why, but I went straight for the violin,” Bockhorst said.

Mayer and Bockhorst continue to cultivate their craft today, and have recently expressed an extreme amount of dedication in the form of practice.

“Malcolm Gladwell wrote a book called ‘Outliers’ and in this book, he talks about how any certain thing takes 10,000 hours to master, so I thought it would be cool to map out our progress and see what happens,” Mayer said.
Bockhorst contended that even after the 10,000 hours of practice, there will be room for improvement. “Obviously, we are going to continue to practice after 10,000 hours. There is no point at which you can stop practicing because you have to keep rejuvenating your skills every day to encompass everything that you have learned along the 10,000 hours,” Bockhorst said.

Since beginning the challenge, both Mayer and Bockhorst have practiced over 500 hours. To put that time into perspective, it is the equivalent of three straight weeks of only playing the violin. “I feel motivated by my friends who are practicing hard, but also by people who are taking like four, five AP classes. They work so hard every single day, and it is my job to equivocate musically what they do academically. It all works out in the end. Those who work the hardest get the best results,” Bockhorst said.

As Mayer and Bockhorst continued to post on their practice accounts, their audience grew and they began to feel tremendous pressure to perform well. “I think both of us have gone through this experience of making one video that has a good reception because it sounds pretty good and people like it. And you feel motivated the next day, like oh, people like this, I gotta make this video just the same or even better. And gradually, as the days rack up, you are needing to make a better video. The most time I have spent recording a video was 45 minutes, playing the same thing, the same passage over and over again.” Bockhorst said. He describes how the process had become unproductive and unenjoyable.

Mayer echoed a similar sentiment.“I think for both of us, it got to the point where it become physically unhealthy and mentally unhealthy. I was pushing myself to the point where practice was not fun. It was all about the time and meeting the goal of getting 5 hours in,” Mayer said. “Also, in the past couple weeks, when I stopped becoming obsessive over the time but more just enjoying the time that I do have, I enjoyed it. Even if it is just two and a half, three hours, it was fun. I have been looking forward to that in my day now.”

Now, besides practicing on their own, Mayer and Bockhorst also teach violin to younger kids. “I teach these two boys as part of this St. Louis Symphony program called Peer to Peer. The boys don’t really have excess to a substantial music curriculum so it is sort of my job to provide that to them. They told me to help them to learn the violin and how to play it but I feel like there is so much more I could do for them,” Bockhorst said.

As they continued to play violin, their appreciation for violin and classical music has grown.“My appreciation for classical music and music in general has increased in exponential amounts,” Bockhorst said. “When you actually get to play the music people have written for performance, you not only get to listen, you get to feel what is like to perform the music and the emotions of the composer. Because there are so many distractions nowadays, I think the biggest gift playing the violin has given me is discipline.”

Mayer added, “I think music has given me purpose. It has helped me in all aspects of life. It taught me to problem solve, to appreciate, and to look at things from a different perspective. Music is about making people feel things that can not be expressed through words. When you have been working on a piece for six months and finally perform it, it is all the hard work and hard times, the moments that you hated, and the whole process of practicing that makes the final product special. Music requires a lot of sacrifice, willpower, discipline and perseverance. Although it is hard, and it takes a toll on your mind and your body, at end of the day, the reward of having music in your life is fantastic.”