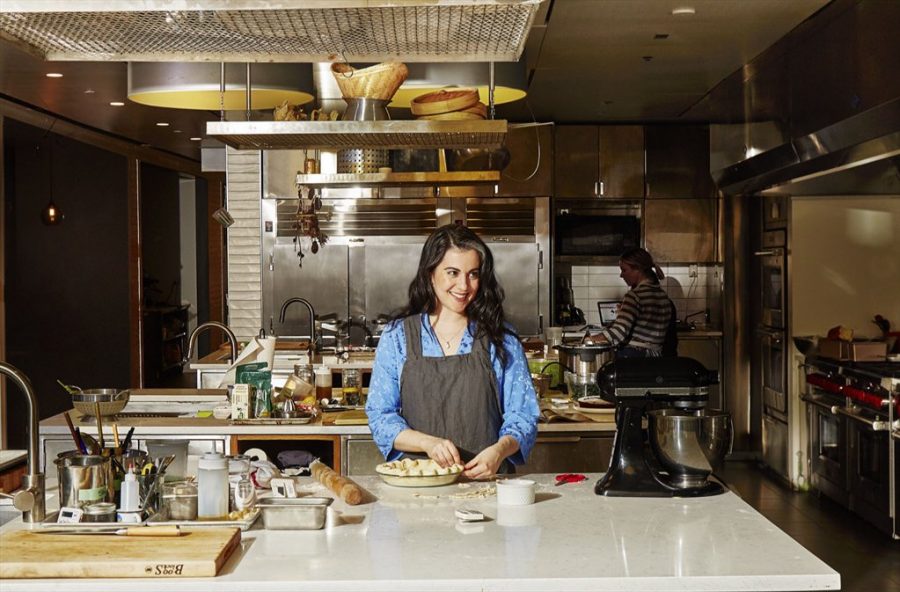 Claire Saffitz at her work bench in the Bon Appetit Test Kitchen in New York City.

From the sidewalks of University City to the subway stops of the Upper West Side, at least one thing has remained constant for Claire Saffitz: her love of food. Whether it’s takeout from Amighettit’s on The Hill with her mom, the in-season BLT’s she now makes with her boyfriend in their apartment, or the crazy but realistic concoctions that come out of the test kitchen, she continues to foster this love.

Many stories above the New York skyline, in a kitchen lined with countless burners and countertops, Saffitz spends most days fostering her love for cooking though her work with Bon Appetit. Bon Appetit is one of the largest food magazines and food content producers in the country. The “BA Test Kitchen” is exactly what it sounds like — a place where they test, create, refine and improve many of the recipes that go out to readers. Saffitz, a now-traditionally trained chef, has created countless recipes under the Bon Appetit name and been described by Adam Rapoport, the Bon Appetit Editor-In-Chief, as the most “erudite test kitchen editor”.

Rapoport’s description of Saffitz as “erudite” isn’t wrong at all. Saffitz began her education at Captain Elementary before matriculating through the Clayton School District and on to higher education. During her time at Clayton, Saffitz studied science with Mr. De La Paz and English with Mrs. Teson, as well as spending time working on the CLAMO yearbook and playing sports.

Graduating from Clayton in 2005, Saffitz went on to attend Harvard University. After long nights of studying, extensive exploration of the Cambridge food scene and eventual graduation, she moved back in with her parents. It was at that moment that things clicked.

Looking for a worldly view, Saffitz went to culinary school in France. École Grégoire-Ferrandi, where Saffitz attended school, was a technical institution of sorts where Claire and many French teenagers learned how to work in the restaurant industry. Saffitz didn’t spend much time working the mise-en-place or the garde-monge station, rather the timing of her culinary education was pivotal as the food scene was undergoing a lot of change.

The food industry has become a place where chefs thrive not only through traditional means, but also by working as recipe testers and developers, food photographers, food stylists, and much more. However, these aren’t always the jobs that are advertised when it comes to food.

“There’s all these kind of jobs in and around food that don’t involve the restaurant industry that I didn’t know existed. Living in St. Louis, it felt very far away. Food was always important but I didn’t start to look at it critically as a possible career path until my 20s,” Saffitz said.

Saffitz signed with Bon Appetit as a recipe tester and worked in their test kitchen before moving throughout the company to where she currently develops original recipes. In addition, she spends a large amount of time in front of the camera where viewers get to directly see the method behind the madness.

Though she has been praised by Rapoport and others, it is Saffitz’s self-described introvert personality and resilience that seem to resonate deeply with the readers and watchers of Bon Appetit. Saffitz’s in-depth knowledge in and out of the kitchen make her a fan favorite and constant fixture on BA’s youtube channel, which has now grown to over 4 million subscribers. Saffitz herself appears in five of BA’s eight most popular videos, which have amassed over 45 million combined views.

Saffitz’s most iconic creation is her now-hallmark show “Gourmet Makes”. The concept features a 15 to 20 minute show where Saffitz is tasked with recreating popular and mainstream treats you would find at your local grocery store and, as the name implies, she attempts to make a gourmet version of said item. While the latest challenge is under wraps until the next episode airs, past treats have included Pop Rocks, Gushers and Cheetos.

“The highlight has been getting to know, over the course of many years, my coworkers really well. The hundreds of people I get to work with and learn from [are] really talented, funny, smart, inspiring people, really great and really creative people,” Saffitz said.

Through countless instagram fan accounts and a feverish comment section, “Gourmet Makes,” along with other BA test kitchen shows, have taken the internet by storm. These shows that come out of the Bon Appetit kitchen seem to have a special and unique charm.

“I end up messing up like 90 percent of the time, and sometimes I have an end result where I think I nailed it and I’m really proud. Sometimes I don’t, I’m sorta like ‘This is the best I could do.’ I like that it’s very real and there isn’t a whole lot of manipulation happening behind the scenes,” Saffitz said.

While Saffitz has little say in what she will be making on camera on any given day, the air of authenticity she provides when on camera sets her above the rest. From nadir to zenith the viewers are right there with her, and they keep coming back for more.

The trials and tribulations of the kitchen apply directly to the high school experience.

“If I were to repeat high school, I think I would try to have a bit of levity. It’s very easy for students to focus on achievement, to put a lot of pressure on themselves. I think that it misses the point. You have to enjoy your life, enjoy your friends and you have to have balance and perspective,” Saffitz said.

The perspective that Saffitz currently works through is one that results from a lifetime of learning and collaboration. Walking the halls of Clayton or dodging hot pans in the test kitchen, Saffitz has always been working with her hands and finding a creative outlet. From childhood art classes at the Craft Alliance in The Loop to working with a close-knit team in the BA test kitchen, Saffitz has been able to grow as a learner, chef and person.

Saffitz is currently working on an original cookbook and will be releasing an exhaustive compilation of some of her best recipes. However, avid viewers have no call to despair — she plans to continue her work with Bon Appetit, where her engaging presence can be enjoyed on “Gourmet Makes” and several other test kitchen shows.