the smell of osmanthus 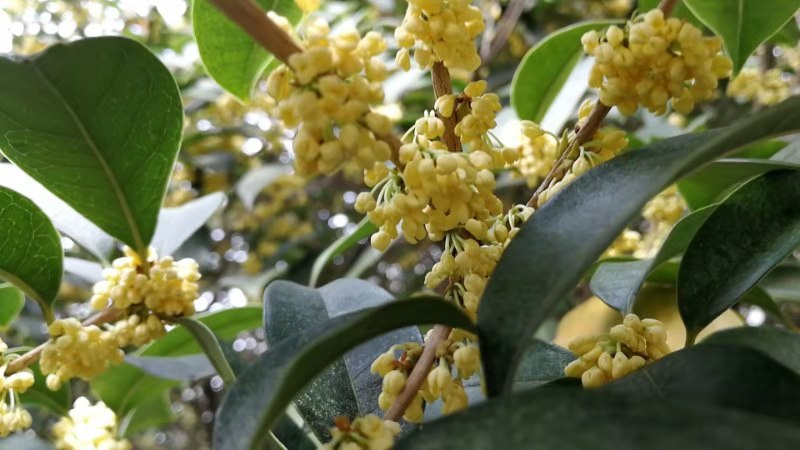 “May we live long and share the beauty of the moon together, even if we are hundreds of miles apart.” On a Mid-autumn festival thousands of years ago, the Chinese poet Su Shi wrote this verse that is still popular among people today.

Mid-autumn festival is a day for eating sweet mooncakes filled with sesame, flying Kongming lanterns with your wishes written on it, and appreciating the full moon with a cup of Longjing green tea.

However, these weren’t the only celebrations my family would do for the festival. Rice balls with non-alcoholic wine, along with honey lotus root was always on the dinner table with osmanthus on that day. Once my favorite part of the annual celebration was picking osmanthus flower with Grandma necessary to make those dishes.

I remember my Grandma in her hand-made straw hat, cradling a basket under her arm as she took me and my cousin out to pick osmanthus blossoms. We would race to the two osmanthus trees hidden inside the woods. Once we caught a whiff of the blossoms, we knew we were near the trees. From a distance, the trees look like any other, but when you looked carefully, you could find small yellow flowers gathered together, like gold hidden in the leaves.

Most of the time, our grandma would collect the osmanthus blossoms by herself. My cousin and I were easily distracted by the chickens and ducks walking by, or even by a passing butterfly.

When we got tired, we would enjoy the refreshing smell of the osmanthus and beg Grandma to tell us legends related to the Mid-Autumn Festival. Her favorite tale to tell is “Wu Gang Chopping the Laurel Tree”. The story goes like this: Long ago, there was a village called Xianning. One-third of the population died caused by a plague. One day, when a brave young man named Wu Gang returned from seeking medicines for his neighbors for the Mid-Autumn Festival. Along the way, through the clouds in the moon palace where the lord of heaven lived, he noticed a tree with golden flowers. Impressed, Wu Gang realized that the tree was an osmanthus. He remembered the saying that the mixture of osmanthus flowers with water is able to cure all illnesses.

He shook the tree, the flowers fell into the river and dyed it gold. As he predicted, the plague in the village was controlled. But the story doesn’t end here.

When the lord of heaven found out of this, he sent Wu Gang to the moon to chop down the self-healing osmanthus tree. The lord of heaven wasn’t mad at him at all instead he was pleased by what Wu Gang has done. However, he couldn’t make any exceptions to the ones that took things away from the palace without his permission, so he honored the osmanthus blossoms that flew down the tree belongs to the villagers who need it.

As we listened to the story of Wu Gang, the jade rabbit who lives on the moon and the story of the goddess Chang, the empty basket was soon filled with fresh flowers, and it was time to go home.

Before I came to the U.S., I could never have known that those memories of picking flowers had become so precious to me. It seemed to me that even the howling stray dogs at night, the quarrelsome neighbors next door, and the endless waiting line to buy breakfast on a Saturday morning, were all memorable.

In the first few days after I came to the U.S., the gloominess of separation that has never been experienced soak all myself. The feeling of sympathetic I found with poet Su Shi is more than sadness, it’s about reminding the warmth in our hearts, our families and the memories we shared together.

To me, the strong osmanthus fragrance in memory is enough.