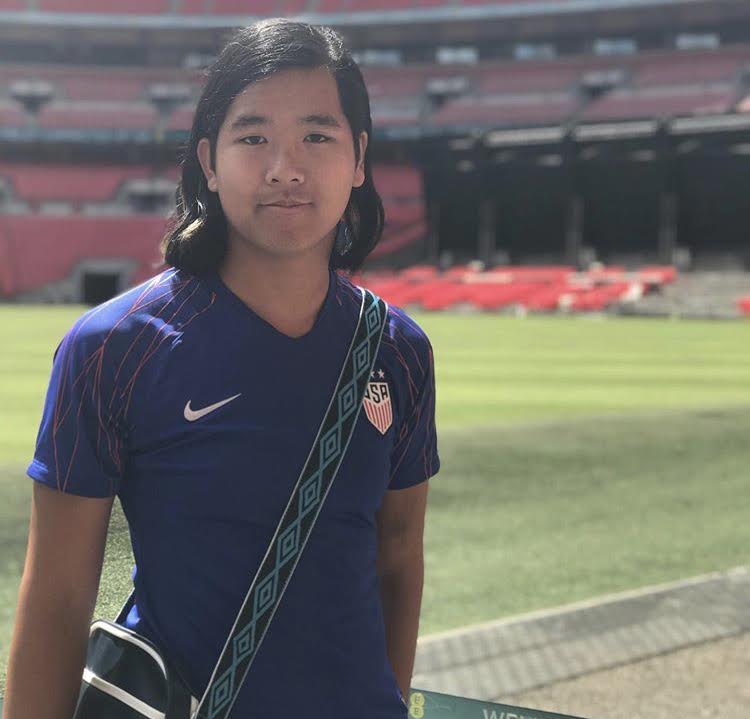 2019 Clayton Graduate Nicky Taghert in a stadium in London, UK.

“It basically affirmed my sense of belonging. Playing on the boys’ team, I never really felt like I belonged,” Nicky Taghert, 2019 CHS graduate, said about her experience playing on the girls’ soccer team as a transgender athlete.

But if proposed state legislation is passed, other trans student athletes in Missouri won’t have the same opportunity.

Senate Joint Resolution (SJR) 50, introduced by Republican state senator Cindy O’Laughlin, is a ballot initiative that suggests an amendment to the state constitution requiring students to participate in single-gender activities “corresponding to the student’s biological sex.” A parallel bill, House Joint Resolution (HJR) 82, has also been put forward by Republican representative Robert Ross in the Missouri House of Representatives.

While these two bills call for ballot measures, House Bill (HB) 2718, also introduced by Ross, proposes a law that would bar transgender females from participating in female sports “regardless of hormone therapy use.”

“We already have a climate where transgender people are […] targets of violence, they’re targets of bullying. So why would you open things up and create this opportunity?” said Anneliese Schaefer, Taghert’s mother.

Missouri’s policy is seen as too restrictive by some. Transathlete, an online resource that provides information about transgender inclusion in sports, sorts states into three categories based on athletics policies for trans high school students: inclusive, needs modification and discriminatory. They define inclusive states as those that do not require transgender athletes to receive hormone treatment or undergo gender reassignment surgery to play on a team with the gender they identify with. States in the “need modification” category– Missouri included — do require these parameters. But Schaefer believes MHSHAA’s policy is reasonable despite being rigid.

“We […] had faith that the process was fair. And that [Nicky] at least had the opportunity to make her case. These sports bills just put a wall up and say if you are transgender, you cannot participate in the sport that conforms with your identity,” Schaefer said. Along with her husband, she has testified at legislative hearings for these bills in Jefferson City. From her experience at the hearings, she has come to believe that the reasoning behind the proposed legislation is not rooted in sound fact and more based in “emotion and conjecture.”

“Number one, there’s no scientific data to support the idea of this unfair advantage. Number two, these types of restrictions run afoul of federal protections,” Schaefer said.
Schaefer referred to Title IX, which states, “no person in the United States shall, on the basis of sex, be excluded from participation in, be denied the benefits of, or be subjected to discrimination under any education program or activity.”

This federal civil rights law has been used on both sides of the ongoing debate over transgender participation in sports. For example, three Connecticut high school girls argued in a recent lawsuit that a state policy violated Title IX by putting cisgender females at a disadvantage competing against trans females. A ruling has not yet been made at the time of publication. The ACLU responded to this lawsuit with a statement that called it “a dangerous distortion of both law and science in the service of excluding trans youth from public life.” According to GLSEN, an organization that works to end discrimination against LGBTQ youth, there is no research supporting the theory that allowing trans females to compete on girls teams gives them a “biological advantage,” as the lawsuit claimed.

“I can’t find any solid, concrete, peer-reviewed data to support the idea that transgender females have a competitive advantage after they’ve had one year of hormone therapy,” Schaefer said. Taghert, who now plays club-level soccer in college, agreed: “Speaking from experience, I can attest to the idea of there not being a competitive advantage. […] One player can’t really affect the team much in terms of ability to win.”

The wave of proposed anti-transgender legislation in the Missouri government isn’t restricted to sports. SB 842 and HB 2051 propose that any parent who provides for a child under 18 to receive surgical or hormonal treatment, including puberty blockers, should be guilty of committing child abuse. HB 1565 would give parents the ability to refuse or remove any curriculum relating to gender identity or sexual orientation.

Representative Chuck Basye, who proposed HB 1565, called it “simply a parental rights issue. […] Existing Missouri law already has parental notification and an opt-out provision for sex education. I’m trying to include the same consideration for gender identity and sexual orientation based on complaints from […] parents.”

Two more bills, HB 1721 and SB 848, would ban hormonal or surgical gender reassignment for minors and establish that any medical professional who provides hormonal treatment or performs gender reassignment surgery would be subject to losing their license. Similar bills that prohibit doctors from providing gender reassignment to minors are also proposed in South Carolina, Oklahoma, Idaho, Colorado and Florida, and more will most likely be filed in other states.

On the federal level, a report released last July by the liberal Center for American Progress found that under the Trump administration, complaints related to sexual orientation and gender identity have become significantly less likely to result in corrective action or investigation by the Department of Education’s Office for Civil Rights. Though the Department of Education presents conflicting data that argues, “students who file civil rights complaints under U.S. Secretary of Education Betsy DeVos’ leadership are served more efficiently and effectively than […] during the previous administration,” many still feel that trans students’ rights have not been upheld under the Trump administration. A month into Trump’s presidency, the departments of Justice and Education announced a reversal of Obama administration-issued guidance that pushed schools to allow trans students to use bathrooms corresponding to their gender identities under Title IX.

Despite setbacks under Trump’s presidency, there have been steps taken that are encouraging to transgender activists and supporters. For example, proposed “bathroom bills” (that require transgender people to use bathrooms and locker rooms corresponding to their assigned sex at birth instead of their gender identity), have failed in several state legislatures after the Obama-era federal guidance was repealed. When one of these bills was passed in North Carolina in March 2016, a national outcry followed, as well as an economic toll on the state caused by major boycotts. In July 2019, a settlement was reached that made it illegal for the state to “prevent transgender people from lawfully using public facilities in accordance with their gender identity.” Meanwhile in South Dakota, a recent bill banning gender reassignment surgery or treatment for children under 16 was declared effectively dead. A bathroom bill and an athletic bill similar to SJR 50 and HJR 82 have also failed in the state in recent years.

It’s hard to predict which way these bills will go in Missouri, but their effects will undoubtedly be felt by transgender students.

Taghert said that if this proposed legislation were in place while she was in high school, “it would have been devastating to me […] it’s also just a very restrictive and invasive policy that discriminates against trans athletes and just reinforces the separation of binary.” Taghert would not be alone in her devastation. Trans youth would be hit particularly hard. A 2018 study by the American Academy of Pediatrics found that transgender teens have disproportionately higher suicide attempt rates than their cisgender counterparts.

“I have no question if kids don’t have this outlet and ability to belong on a team sport, that that number will only go up,” Schaefer said.