Lydia Boda, director of Bridge of Hope, aims to help those who are homeless through the COVID-19 pandemic 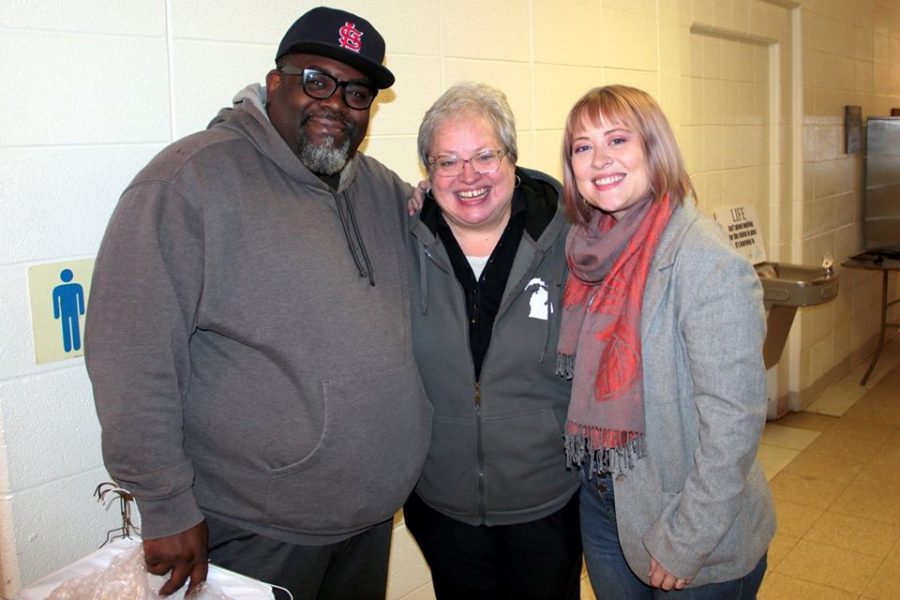 Lydia Boda (far right) with her mother and friend. Photo from Boda.

In 2001, Lydia Boda was still a child, living in the Ville neighborhood of St. Louis with her three brothers. That was the year that her parents started the Bridge of Hope Ministry in their living room.
At first, it was only meant to be a small church.
“We have clients, actually, that still come to Bridge of Hope who started out in those days,” Lydia said. “They would come to church, and worship with us, and ask for different things, and we would get donations from Panera Bread and hand out food and do all sorts of stuff.”
The Boda family’s living room was open for service throughout the week. They occupied the top two floors of a three family apartment complex, from which they offered all the aid that they could provide. It became clear that the need for their help was great in the community. By 2003, the operation had grown so much that they bought and renovated the bottom floor of the building to house their church. But even that wasn’t enough– the room was so packed during services that they could hardly fit everyone in. So, in 2005 they low-balled an offer on a much larger building that used to be a preschool. That same year, it was theirs.
Lydia grew up surrounded by other members of her community. Many of them came to Bridge of Hope for worship, but a great number sought outside help as well. Because the St. Louis public schools in her area were unaccredited, Lydia’s mother home-schooled all four of her children, and through travel and hands-on experiences, ensured that they would receive a robust education. This often also meant that they witnessed first-hand the disparity that existed, and continues to exist, within St. Louis.
“We were in it constantly. I knew about things that were going on. I knew that people were prostitutes, and I knew about drug addiction. My parents did not shelter us at all from any of it, because they knew that if we saw the despair and the exhaustion that it can cause, that there’s no way we could fall into it. They never thought that sheltering was going to be a good way, especially when you’re so in it and you’re in that community. When you see the struggles, you can’t ignore it,” Lydia said.
As Lydia reached adulthood and went to college to study art and sculpture, Bridge of Hope continued to expand. Her father, who was the director of Bridge of Hope, worked to provide showers, laundry, a community garden, food and access to other support systems for clients of the shelter. Today, Bridge of Hope offers tutoring for people trying to obtain their GED or take the ACT, and has regular counseling sessions in order to focus more on mental health.

According to Lydia, her father is “a jack of all trades and just a huge inspiration.” However, when he was no longer able to run the shelter, Lydia returned home from Michigan to help. Although she was initially planning on lending a hand where she could, the shelter’s Board noticed her passion and commitment to the community.
“I didn’t even think about becoming the director until I had two board members approach me and say, ‘Hey, have you thought about being the director here? Because we really need somebody who’s going to steer the ship with a little bit of energy,’” Lydia said. “I was overwhelmed by it, because I’m so young and I’ve never worked in ministry. But I wanted to see it succeed. And it was also kind of a challenge, like, ‘How can I take this business, this incredibly full-hearted business, and then translate it to people who are willing to provide funds for it, and be able to save it from being closed in a couple months?”
At 27, Lydia took over the director position at Bridge of Hope. It was a turbulent time for the shelter– funding was down, and it seemed like they might have to close within a span of months without help.
Today, they are in a much better place.
“We’re actually doing really well. We’re okay. Better than what we were when I first started a year ago, you know, we were two months away from completely shutting down. Now we’re able to sustain and stay open. But with this whole virus, it’s kind of a big unknown. Our big fundraiser had to be canceled. There’s a lot of things up in the air. But honestly, there’s nothing else that we can do about it, other than to keep asking and keep in communication with the people who support us,” Lydia said.

For the population that Bridge of Hope serves, and especially those who are homeless, COVID-19 poses a major threat. Not only are many shelters closing down in order to prevent crowding, food is less accessible, and those without a home have no way to practice social distancing. Lydia is planning on reopening Bridge of Hope on the week of April 5th in order to start handing out lunches until the 22nd, but even that cannot encompass all of its usual services. In addition, without access to the news, many homeless St. Louisans are less informed on the precautions that they should be taking.
“That whole weekend to Monday, that was insane,” Lydia said. “We had to change things constantly, and it was just chaotic. Our whole community was like, ‘What? What’s going on?’ because they don’t have access to TV. So they would hear about it at Bridge of Hope and other organizations, and they just don’t really understand why everything is changing.”
For those looking to help vulnerable members of St. Louis over the course of this pandemic, Lydia suggests researching organizations that will be able to provide services for them. There are many steps that can be taken; making sack lunches or donating hygiene products may be a good place to start. To donate to Bridge of Hope, visit bridgeofhopestl.org.

“[Bridge of Hope] is a safe place,” Lydia said. “We accept everyone. That’s our biggest thing. We are a safe place.”