The Science Behind Coronavirus 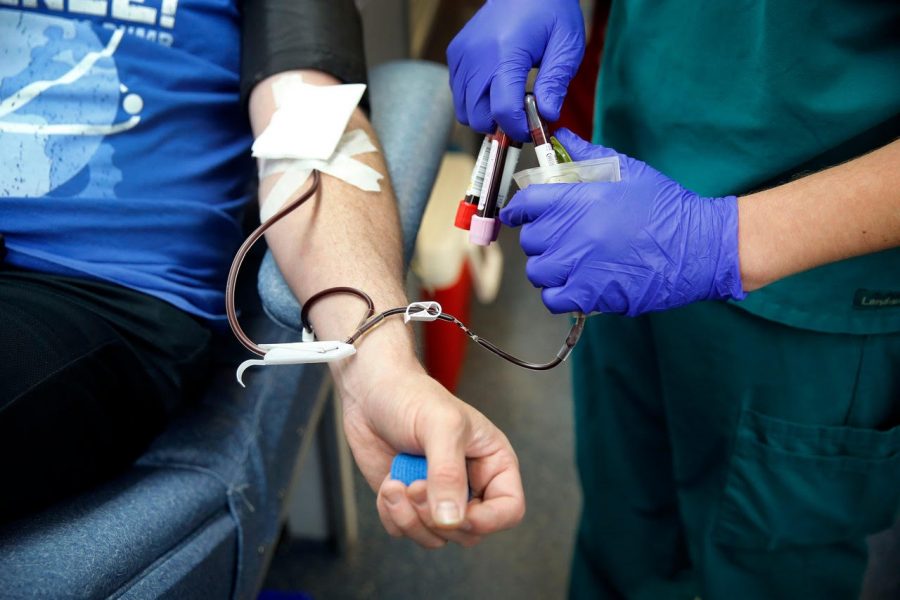 Mobile supervisor and phlebotomist Greg Calvert draws blood from Matt Burnside of Dallas to start the process of apheresis.

For the United States, pandemics are nothing new. With four influenza outbreaks tucked under our belts from the last 102 years, the COVID-19 situation isn’t an unfamiliar one.

“[Although] nobody could have reasonably predicted that a particular coronavirus that looks just like this would be the cause of a pandemic, we have always been aware of the risk of and expecting the risk of a pandemic from a respiratory virus causing significant disease and impact around the world,” said Dr. Steven Lawrence, an associate professor of medicine at Washington University in St. Louis. Working under the Division of Infectious Diseases, his research focuses greatly on viral infections, pandemics and vaccines.

Despite our background of experience, the current coronavirus situation seems to be spiraling out of control. The first COVID-19 case was reported in the US on January 20th in Snohomish County, Washington. A little over three months later, on April 28th, the United States hit one million reported cases of the virus, a third of all the reported cases in the world at the time.

The virus COVID-19, also known as SARS-CoV-2, belongs to a family of viruses called “coronaviruses”.

Most coronaviruses present mild symptoms and are not able to be spread on a large scale. However, in the past, countries around the world have experienced a few more serious viruses from the coronaviridae family.

The current coronavirus has plenty of symptoms that include coughing, fever, fatigue, nausea, shortness of breath, headache and muscle aches. About 15% of infected people would get sick enough to have to go to the hospital. But despite the current coronavirus being not as serious as past viruses from the same family, Lawrence believes this outbreak to be worse than previous outbreaks.

“[With] the original SARS in 2003, even though the risk of dying from that infection was higher than the current [coronavirus], you could identify people with symptoms pretty easily because of the way it presented [those] symptoms. It allowed for the complete elimination of it just by using all of the public health measures [like] the kinds of things that we’re doing now,” he said. “[With COVID-19], because of the fact that it can pass from person to person, even [when someone doesn’t show] symptoms, that has made it impossible to contain. There’s been such such a large impact on all the economies of the world because of all of the measures that we have to take to prevent extensive transmission and to lower the risk of death for lots of people.”

On March 26th, the US hit a remarkably unfortunate milestone: we were now the country with now the most reported COVID-19 cases. Lawrence believes that there are a number of things that could have been done to help us be in better shape than we are now. One of these would be not initially downplaying the dangers of coronavirus.

“I think that [we should’ve taken the] opportunities to communicate what we knew about the virus and some of the concerns very early on rather than taking an approach of trying to minimize the risk of it,” he explained. “I think we lost some time in preparing communities for what could be coming. It was a little bit of a shock for many people that we needed to take some of these [current] measures like staying at home, because there was a sense that early on, perhaps things maybe weren’t as bad as they really were getting.”

“[It’s important to have] a very strategic and coordinated federal response for things like acquiring and deploying all of the personal protection equipment to where it’s needed most and to be able to work in a coordinated fashion to make sure we have all of those materials. What also could have been done differently is to have a more strategic plan for testing,” he said. “[We didn’t] really have a central federal unified plan in response to [the outbreak]. It was more left for states to make their own decisions on how to do things.”

In the United States, the testing process for COVID-19 has been nothing short of a disaster. Testing is done by a doctor putting a swab deep into a patient’s nose to extract some mucus. A test called a PCR is then conducted on the sampled mucus to find out whether the patient tested has contracted the virus. Another method used for testing is the serology test, also known as an antibody test. This test requires a sample of the patient’s blood and looks for antibodies which indicate that the person has been exposed to the virus, allowing doctors to approximate how many people in a specific area have been infected. With these testing processes have come many issues.

“The biggest problems that we have with the testing right now is that we have a short supply of some of the swabs that we used to put into the nose to collect that mucus… There’s also the tests themselves. They use chemicals to be able to run the machine and actually do the task. And those are also somewhat short supply, so those two factors are the main reasons why we don’t have the capability to test absolutely everybody who probably should be tested,” Lawrence stated.

“If there was enough testing capacity for every single person who had symptoms and [we could] identify everyone who had infections and then watch all of the people who had contact with them for an extended period of time, then we would be able to really fully control the epidemic,” he said.

Patients have a few options for where to get tested. Depending on where your test goes, results could come back in a few hours or over a week later.

“Some hospitals have the ability to run the test themselves. [For example,] at Barnes Jewish hospital we have that capability. If you’re a patient [there], we can do the test and we’ll get that test result back in less than a day, sometimes even in just a few hours. Another place where many people have their tests is the state public health laboratory. There are some more restrictions on who can have the test done there [and] it usually takes a couple of days to get the results. The third place where tests can be done are commercial laboratories around the country. There are a couple of them at the moment. [They] require a sample being sent by FedEx, and it goes across the country. Sometimes it can take many days to get those test results back just simply because they’re receiving tens of thousands of tests per day,” said Lawrence.

Currently, testing centers located in areas with large exposure to COVID-19 have been overwhelmed. Sometimes, if a hospital cannot take a number of mucus samples, these samples must be packaged in dry ice and then shipped across the country to another testing center, expending even more limited resources.

Regarding treatment for the virus, many people are turning to a century-old remedy: plasma infusion. The method involves drawing blood from people who were previously infected with the coronavirus but were able to recover. These people have developed antibodies in their blood that provide a new immunity against the virus, and these antibodies are located in the plasma of an individual’s blood. Proving to be highly effective during the Spanish Flu pandemic in the early 20th century, there is reason to believe that it will work now as well. However, this treatment method has its downsides.

“It’s not practical for large scale use,” Lawrence said. “It’s hard to get a lot of it [and] to scale up, so it won’t be widely available.”
Another suggestion that has been pushed into the limelight is the use of remdesivir, an antiviral drug that was originally designed by Gilead Sciences to combat the Ebola virus. People have also been considering using hydroxychloroquine, a drug used to prevent malaria. However, recent tests have given disappointing results.

“It’s really important to do appropriate testing on things… If there’s a medicine that’s around, and it’s just used very broadly without undergoing proper testing to determine if it works, there’s the potential that you could actually do more harm with the medicine. With hydroxychloroquine we’re concerned that might be happening. Maybe we’ll have more harm than good by using it,” Lawrence said.

As more and more people get infected, the need for a vaccine grows larger by the day. However, Lawrence says for an effective and accessible vaccine, the wait will continue due to all of the tests that must be run first.

“The FDA has three phases of testing. The [first and second] phase studies are basically tests to see if [the candidate] is safe, and if it [makes] your body create antibodies against the virus. Then, [in] a phase three study, they give [the vaccine] to people who are at risk of getting the infection. Half the people [in the study] get the vaccine, half get a placebo, and then you determine if the group that got the vaccine was less likely to get infected,” he explained. “These studies take a very long time. In all likelihood, it’s going to be at least another year or probably a year and a half to two years before there is a widely available, safe and effective vaccine… I think we should not expect it, even in the best case scenario, before 2021. And then even in the best case scenario, it will take quite a long time to produce enough of it to be able to make it available for everybody.”

Looking on the bright side, however, the speed at which vaccine candidates have been being developed has been incredibly fast, showing the large scientific advancements that have been made in this area.

“From the time that the first virus was sequenced, to the time where there is a vaccine candidate that was ready for phase one clinical trials, that [took] about six weeks, and that is unheard of. Even ten years ago, that would have been probably six months or more,” said Lawrence. “Regardless of when we have it, it’ll be the fastest vaccine in history.”

As the curve begins to flatten, the economy begins to reopen and people start going out again, Lawrence warns everyone to stay safe and be careful.

“We’re at a very important part where the worst part of this wave is just ending and we’re starting to go and get on the other side of it. But there’s still a lot of infection that’s being spread out in the community.  Lawrence said. “Even if we’re not under stay-at-home orders, we have to be sure to limit the number of people who get together at any one time, to still stay six feet away from each other as much as possible, to wear masks when you can’t stay six feet away from each other and to continue washing your hands all the time. These measures are essential to keep disease transmission down [and] really make a difference.”