Mulan (2020) disappoints with a bland story 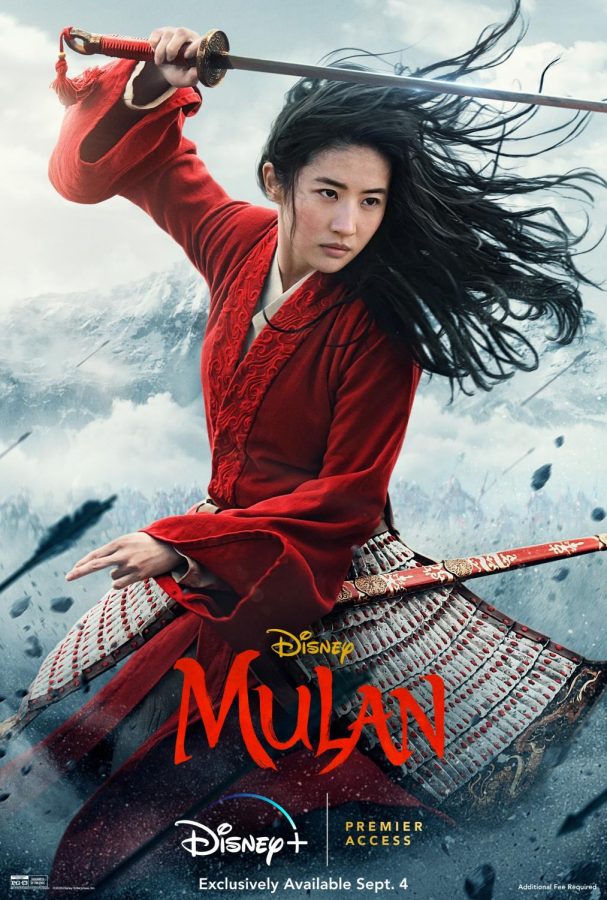 Mulan Official Movie Poster, a movie based on the animated film of the same name

Mulan, a live-action remake of the 1998 animated movie, is currently available on Disney+ for $30. With impressive action scenes and beautiful backgrounds from the trailer, I expected a whole new story and a way to revive one of my favorite childhood movies. However, Mulan falls under the shadow of the previous film and ends up as bland as a run-of-the-mill action movie.

Directed by Niki Caro, it retells the ancient Ballad of Mulan in live-action. Hua Mulan, the heroine, is an adept user of chi, an energy that people can harness to perform supernatural acts like defying gravity, but its use is prohibited for women. The Rourans, led by antagonists Böri Khan and Xianniang, aim to take over China. As the Chinese emperor tries to fight back with a better army, Mulan’s frail father, a famous war-veteran, is conscripted to the war effort. Fearing he will die, Mulan decides to take her father’s place in disguise as a man despite severe punishment if she is found out.

During Mulan’s military training, I increasingly became disappointed with the lack of life and personality in the characters. The side characters, Mulan’s friends, flashed by and introduced themselves, but none of them stuck out to me or had much character. By the end of the animated movie, her fellow soldiers were her friends, but by the end of the live-action, I wasn’t even sure of their names.

Mulan also lacks character. From the start, Mulan possesses chi, a roughly defined power. In the old film, there is a montage that is paired with “I’ll Make a Man out of You,” where Mulan gradually becomes wiser and stronger to finally climb the pole with the weights. Instead of just physically trying to climb the pole, she uses her logic and her new strength to get to the top. However, the climax of her training in this movie is when she finally shows her chi powers to carry buckets of water to the top of a mountain. This was disappointing, as in the animated version, you could really see her character develop instead of Mulan just revealing powers she has had since she was a child.

The largest disappointment, however, was Xianniang (played by Li Gong), who was exiled from her village for using her chi as a woman. As a new character with interesting motives, she was overflowing with potential. However, the movie barely mentions her backstory or what caused her to join forces with Böri Khan despite being much more powerful than him. I believe if they had given her full character development and backstory, she could have compensated for the lack of life in the rest of the characters. Unfortunately, we are only left with minimal remarks on her life, and nothing else.

The rest of the movie went by and between intense battle scenes, there wasn’t much. The structure was a simple action movie– beautiful visuals, average acting, and a straightforward plot. It was fine as an action movie, but as Mulan, I expected something a little more. The animated movie displayed Mulan’s character and emotion, whether it was through song or speaking with her fellow soldiers. The live-action plowed through the dialogue and replaced the time that could have deepened the plot and character with gravity-defying arrow-catching scenes. Dazzling, perhaps, but in the end, they left no impression upon me.

Even though it sports an all-Asian cast, it still lacks in certain departments of Asian representation– particularly behind the scenes. For example, Mulan has been criticized for its lack of hiring an Asian costume designer and the number of white people in prominent behind-the-scenes roles. The director, composer, cinematographer, casting director, and the screenwriters of Mulan are white. Not only that, but Mulan has also faced controversy over credits offering special thanks to officials in Xinjiang province, a province that has been accused of severe human rights abuse to Uighur Muslims. Liu Yifei, the actress for Mulan, has also supported the Hong Kong police which has caused people to boycott Mulan.

Overall, Mulan had beautiful scenes and thrilling battle sequences. But the movie, chock full of those action scenes, leaves little left for development of anything truly captivating.