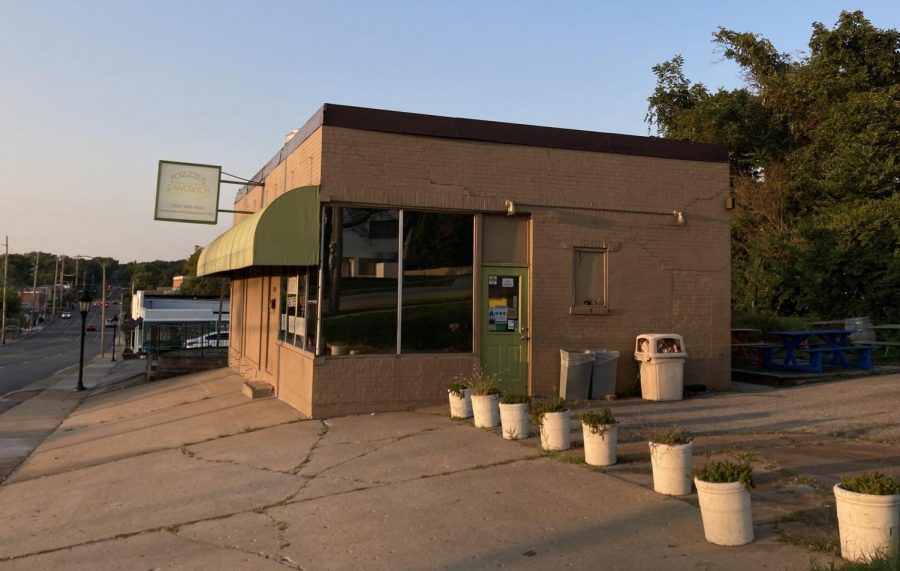 Located just feet from the intersection between Big Bend and Interstate 64, Fozzies seemed like a typical “run-of-the-mill” small restaurant. It was opened in 2010 by Mark Lucas, and the sandwich emporium has gotten widespread attention and praise. Lucas was named one of the “20 Sandwich Chefs to know” in 2012 by the Stl magazine. Even so, is Fozzies a sandwich shop to know? From my experience, the answer is yes. Fozzies is a hidden gem within the outskirts of the St. Louis suburbs. In this review, I ordered takeout from Fozzies to maximize safety. Without this pandemic though, I could have eaten inside or outside the restaurant. The entrance to the family-owned business, which has two locations in the St. Louis area, seemed slightly unorthodox. Upon arrival at the Richmond Heights location, it wasn’t apparent how to get into the restaurant. There was a large, slightly overgrown garden full of fresh herbs basking in the sun. There was a somewhat run-down trailer in the grass, which bordered the outskirts of the property. Within the area, well organized and colorful chairs and tables served as an outdoor dining space for guests, and the entrance was located on the other side of the building of the parking lot, facing Interstate 64.

Within the restaurant, the space was small and cozy. However, it wasn’t a desirable dining area, as the square footage inside wasn’t large enough for personal space. Within the interior, a large window facing Big Bend let in lots of natural light, while everything seemed to be sanitary and in order. My takeout order of a milkshake, a lamb gyro, and Tzatziki Spread were on time on a rack within the restaurant. Even so, I had to ask for my milkshake, which wasn’t placed within the takeout bag. I would have loved it if this detail was more apparent, as other customers would’ve taken the bag, assuming that there was a milkshake within (only to find the opposite). I believe it should be made clear what the customer should do if they ordered a milkshake as part of a takeout order. Nevertheless, the milkshake I asked for was delivered quickly and efficiently.

My impression of the food from Fozzies was generally positive. The S’mores milkshake had a nice thick consistency with bits of chocolate and marshmallows scattered throughout. The Tzatziki Spread I ordered was oversized, flavorful, and slightly acidic. It complemented the traditionally plain pita bread that came with the order. I believe the lamb gyro I ordered also contained the dip and had a nice balance of meat and vegetables. The peppers in the gyro gave it some heat, but it wasn’t overwhelming. The vegetables were fresh tasting and high quality. I thought the cucumbers were a little too big within the gyro and would have fared better in smaller pieces.

The quality of food at Fozzie’s didn’t disappoint. There were no glaring flaws, and the food was flavorful and existed within its traditional European theme. With such great ingredients, the food was reasonably priced. The gyro cost $8, the Tzatziki Spread and bread cost $7, and the shake cost $3. The gyro was enough for a meal, and I ate way too much for this review. While the food wasn’t “revolutionary,” it was very tasty and high quality.

Overall, Fozzies is a great local restaurant for those willing to try something a bit unorthodox. While they sell burgers and traditional American foods, their focus on greek style foods (such as gyros and different types of spreads) will expand the palette in your mouth. While Fozzie’s doesn’t have an ideal indoor dining spot, it’s superior to other restaurants in terms of outdoor dining, ease of takeout, and value. Minor nuances exist (mainly the milkshake fiasco), but my chances of returning are very high.