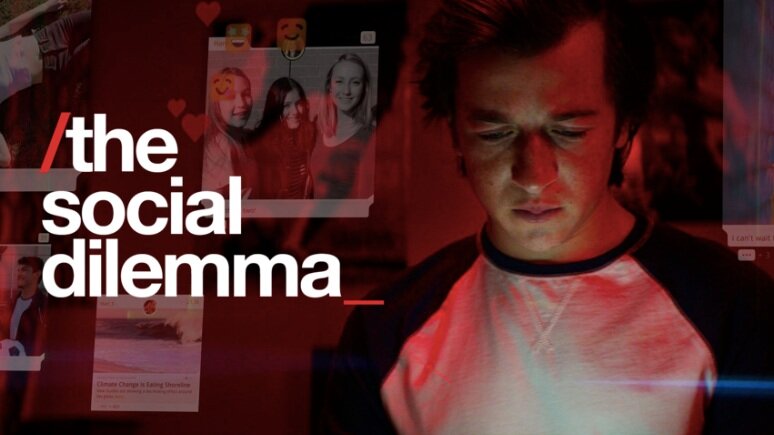 Social media has monopolized people’s attention at an unprecedented rate. It has dominated so fast that the sites being used are younger than most of the billions of daily users. Consequently, the effects of social media are yet to be confronted and solved. And in the day and age of COVID-19, it’s almost impossible not to spend time on social networks, which makes “The Social Dilemma”, a documentary about the problems caused by social media ever so applicable. From the very first frame on the dark screen stating the quote, “Nothing vast enters the life of mortals without a curse”, accompanied by an eerie instrumental, the documentary immediately sets its doomsday mood.
One of the ways the documentary shows the negative effects of social media is through a fictional family of five: Ben, a teenage boy, Isla, a teenage girl, and Cas, the older sister (that doesn’t use social media), and two parents. Through this family, we are able to see negative effects of social media including political polarization, cyberbullying and addiction. While this portion of the documentary gives real life negative effects of social media, some of the situations seem rushed or too unrealistic. An example was a dramatization of Isla, the phone enslaved teen, breaking into a timed safe with a pair of kitchen tongs to get her phone, because she can’t possibly spend one dinner without her phone. Even though this dramatization is extreme the problem still exists.
CHS student Sophia Pelligreen makes the connection many people face with screens disrupting family time, “Everyone is on their phones and we get ‘distracted’, but we still spend time together just not as much.” A similar connection is made between time spent with friends, a topic that is also brushed upon in the documentary, “When I hang out with friends I always see them on social media.” A reality we’ve become accustomed to that would’ve been considered absurd less than a lifetime ago.
On top of the anti-social media advocates, the documentary also includes snippets of interviews with several people involved in the creation of popular social media sites. These snippets help to form the larger story behind the causes of the negative impacts of social media. It also gives the documentary a powerful wide range of voices. Every single creator is shown to recognize major problems of social media: countlessly repeating the phrase, “we weren’t expecting this” or “there was never any malicious intent”. Some of these creators claim their kids don’t use social media because it’s banned under their roof.
The documentary introduces the viewer to the idea of an algorithm. After explaining the technicalities, the algorithm becomes represented by an evil trio monitoring and changing Ben’s social media feed to gain the most monetization, engagement and growth. This representation makes the algorithm more understandable and dramatic as well as giving the algorithm an evil face. This section is very insightful and ironic considering this documentary was probably recommended to most people by the Netflix algorithm.
CHS sophomore Trey Perlut said what many think while learning about the algorithm, “I was aware of it, but I wasn’t aware how much it impacted people.”
Throughout the documentary, psychological explanations are provided to explain the programming of social media sites. Through some of these explanations, the viewer is able to form their own explanation for their social media habits.
While explaining the problem of political polarization caused by social media. Justin Rosenstein, the coinventor of the Facebook ‘like button’, puts it simply, “And then you look over at the other side, and you start to think, ‘how can those people be so stupid?…How are they not seeing that same information,’ and the answer is, ‘they’re not seeing that same information.”
The documentary also confronts the criticism that we’ll adapt to social media like we’ve adapted to every new invention affecting the general population. It explains that we’ve evolved from tool based technology to addiction and manipulation based technology. Social media technology is advancing exponentially, something that has never happened before.
The direct correlation between teenage mental health issues and social media use is also brought to light, even though the only teens shown to be interviewed are on the screen for only a few seconds addressing their screen time.
But on the topic of teen representation CHS student Trey Perlut said in a positive light, “I think they represented teens very well.” Even though the struggles faced by teens aren’t shown through interviews they are well supported through the fictional family subplot as well as the statistics provided. Sophia Pelligreen also expresses the additional social complications that occur in teens when depending on communicating emotions through social media, “You can share your feelings over texting and your wording could come out wrong.”
Personally, the documentary helped me identify some of my own social media habits, and made me think about the negative effects it has on my life. From someone that uses social media almost everyday this documentary was eye opening on issues I was familiar with, but didn’t take enough time to truly acknowledge.
Throughout its entirety “The Social Dilemma” doesn’t sugar coat the negative effects of social media. In addition to the continus eerie music playing, “The Social Dilemma” explains in a fairly simple way the negative causes and effects in an impactful and memorable way.