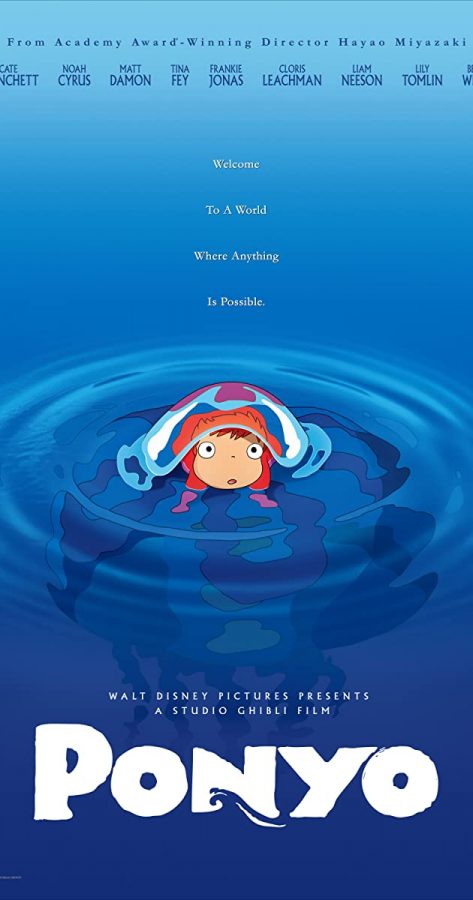 Official poster of Ponyo, a movie that was released in 2008

The 2008 Studio Ghibli film Ponyo is a story about a magical fish who ends up on the surface in the little green pail of a boy named Sosuke. He names the fish “Ponyo” and takes her to school with him, where he later loses Ponyo. Ponyo gets returned to her father, a sea wizard who hates humans even though he was one. He, with his hatred for all things human, tries his hardest to keep Ponyo from returning to the surface, and fails. While Ponyo is attempting to escape, she turns into a human and accidentally messes with her fathers potions and while she does get back to Sasuke and his mom, she also floods the entire town, including the retirement center that Sasuke’s mom works at and Sasuke’s school. The only building that’s completely spared is Sasuke’s home, as it rests on the top of a very high barge.
Sasuke and Ponyo are left alone in the flooded city and try to find their way to Sasuke’s mom. On the way they run into a little trouble involving the magic keeping her a human, but mange to solve that problem when they get back to Sauske’s mom, who is with both Ponyo’s mom and dad. As always, there’s a happy ending and Ponyo ends the movie as a human.
Visuals/Animation: 9/10

The way Ponyo was animated really makes the story feel complete. The animators reach into the fun, playful energy that’s set up through the movie to make some really cool looking movements.
Since Ponyo is a small, curious child, throughout the movie she gets herself into a lot of sticky situations, like getting herself stuck in a jar. There’s quite a few scenes where someone (usually Ponyo) is animated in a way that distorts their face. At times it can be uncomfortable, because you’re watching a human mouth open far too wide to be comfortable for both you and that person, but other times it matches with the childish, energetic energy that everyone in the movie has. 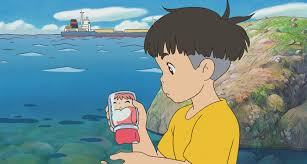 Once again, Studio Ghibli’s attention to detail is amazing. They do not shy away from animating every tiny detail on the giant sea creatures when the town gets flooded, or each noodle in the ramen Sosuke’s mom makes when Ponyo first comes to them. The stand out scene would be in the beginning, where you first meet Ponyo and her father. You see an underwater scene, with schools of fish passing by and light glowing from holes in rocks. It’s a truly beautiful opening scene, and one of my personal favorites.
Plot: 9.5/10
The plot of this movie is interesting. It holds a lot of similarities to the Hans Christian Anderson tale, The Little Mermaid, which was on purpose. Hayao Miyazaki, a founder of Studio Ghibli, said during an interview that while he did take some inspiration from the tale, it was more of an abstract inspiration rather than a retelling of it.
Ponyo, unlike My Neighbor Totoro, has somewhat of a plot, so it’s better for those who want a storyline to follow. It’s pretty straightforward, little fish gets a glimpse of the surface and a friend, betrays her powerful dad’s orders to not return, returns to her surface friend, almost dies for a hot second, then stays alive and on the surface world. My only issues come with the lore.
There’s a lot missing in terms of the past. Ponyo’s dad used to be a human but we don’t know how or why he’s no longer human, or why he has such a hatred towards them. Many of the recurring side characters are really confusing too, like why is Ponyo’s mom a goddess? That’s never explained nor explored outside of her making Ponyo a human. There’s a lot going on behind the scenes of this universe and we don’t get any real reasons as to why anything is happening.
Soundtrack/Audio: 9/10
The soundtrack for Ponyo is kind of underwhelming. The movie itself isn’t as focused on music and atmosphere as other Ghibli Movies, which is why the soundtrack isn’t as impactful. The movie does utilize smaller scores to help convey emotions of characters however, which is nice, but there’s a tendency to use the same or very similar scores for the same emotions. When 3 characters are sad in a span of 15 minutes, hearing the same few notes gets pretty annoying. No song specific to the movie really stands out when watching it. The only song that sort of does is the end credit song, Ponyo on the Cliff by the Sea (Remix). It’s such a horribly wonderful song that feels like it should be ironic, but probably isn’t.

My favorite part of the audio aspect outside of the music is Ponyo herself. In the English dub (the version I watched) Ponyo’s curiosity and excitement about anything human is so wonderfully portrayed. Every time she discovers something new she lets out a little gasp of excitement, or a tiny “oohh” of wonder and it’s adorable. It really shows how much attention to detail Studio Ghibli has.
Characters/Character Design: 9/10
The thing with anthropomorphizing animals is that you tread a fine line between “adorable character” and “furry”. Thankfully, Studio Ghibli managed to stay on the “adorable character side” of things this time (I see you, The Cat Returns) when they were designing the human form of Ponyo. I love the way Ponyo is designed. It’s really cute, she has this cute puffy red dress with this white diaper/petticoat thing that I don’t really know the purpose of but it ties the outfit design together so it’s not that weird. All in all, Ponyo’s designs both as a fish and as a human are very nice, and the puffiness of it all really complements her character.
The only character that confused me was Sosuke’s mom, Lisa. She’s surprising chill for the entity of the movie. Going with the flow is one thing, but when a little magic fish girl comes up to you and your son after flooding an entire city, you should probably be asking a question or two. The only time she actually is suspicious about something is when a man (who is actually Ponyo’s father looking for her-but Lisa doesn’t know that) looks like he’s watering her lawn. That’s not a weird thing to have happen but Lisa just yells at this man with almost no prompting. It’s not a huge character flaw, but it’s an odd character trait that peeved me for a majority of watching the movie.
Atmosphere: 9/10
The atmosphere of Ponyo is immaculate. The environment created is just so loving and welcoming. Neither Sasuke or Sasuke’s mom question when Ponyo suddenly comes to them, instead welcoming her and making her food (here). You can tell that every person in this movie is full of love, whether it be towards Ponyo or Sasuke, or even the old people in the retirement home. Everybody in Ponyo loves someone to an almost overwhelming point.
Other than the movie feeling loving, it also feels very magical. It’d be incredibly hard to avoid that vibe, considering a lot of the plot centers around magic, but Studio Ghibli has mastered creating magical worlds that still manage to feel like reality. There’s a perfect mix of insane magic and odd outfit choices but just enough normalcy that you can watch a scene and go “Oh yeah, I guess that makes sense.” It’s a welcome change from worlds like that are so surreal it feels like nothing in that universe could ever happen in ours.
Total: 45.5/50 (91%)
Ponyo is a perfect way to get a glimpse into a magical childhood when you’re in the mood for a bright, vibrant movie to watch. Despite being overshadowed by My Neighbor Totoro, Howl’s Moving Castle, Kiki’s Delivery Service, and many others, it’s one of their best movies. One of Ghibli’s many hidden gems.