How Close Are We?

Many Americans are hoping for a vaccine by 2021- is that possible? 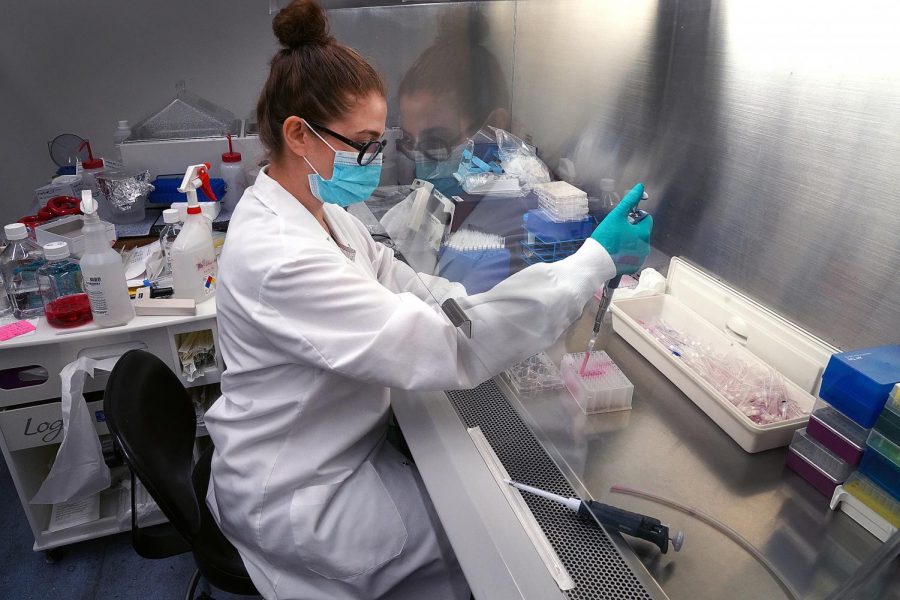 Scientist Shima Nikkhah works on a vaccine for the COVID-19 virus.

Masks, herd immunity, social distancing. None of these potential virus killers or preventers are as popular in the eyes of the American people and political leaders as an end-all be-all COVID-19 vaccine.
Since the threat of the virus became evident and its effect on the globe began to take hold, a distributable and effective vaccine has become of utmost importance for the American government. The current White House administration initiated Operation Warp Speed on May 15 of 2020 in an effort to “produce and deliver 300 million doses of safe and effective vaccines” with initial doses by January of 2021, according to the U.S. Department of Health and Human Services’ website.
Despite being a bipartisan issue, the handling of the COVID-19 pandemic and the creation of a potential vaccine has been greatly influenced by the current political climate, particularly due to the ever-closer 2020 election. Rather than suggest and enforce the utilization of masks and social distancing, President Trump opted to rush forward with the production of a vaccine in time for November 3.
Now, with over 7.7 million COVID cases in the U.S. and over 210 thousands deaths, the Trump administration is in dire need of a working vaccine to help bolster re-election chances.
Currently, there are 44 individual vaccines in clinical trials being conducted on humans. 92 more are under active investigation in preclinical testing. Of the 44 undergoing clinical trials, 5 are approved for early or limited use.
The vaccine trials are divided into three developmental stages, or phases as defined by the Centers for Disease Control and Prevention. First, the potential vaccine is exposed to very small groups of people to produce results from a human trial. If it succeeds and is found to be safe, it enters phase two, where it is given to a larger group of people of varying age and physical health similar to those for whom the vaccine is intended. Finally, it enters phase three: a widespread clinical trial consisting of thousands of participants and is tested for efficacy and safety. Should a vaccine pass phase three of clinical trials, it must then be approved by the U.S. Food and Drug Administration (FDA) before it can enter the market.
The two furthest along, Pfizer and Moderna, are hoping to gain approval from the FDA sometime in November of 2020.
The Pfizer and Moderna vaccines both use mRNA technology. This type of vaccine uses a strand of messenger RNA (mRNA) which, when entered into the body, will cause your cells to begin producing certain proteins to be recognized as antigens produced by a COVID infection by your immune system. This will cause your immune system to engage a response similar to if you were infected by COVID, producing antibodies without the risk of spreading the actual virus.
This type of mRNA vaccine is also much faster to produce and test than other traditional vaccines, making it the optimal choice for a solution in such pressing conditions.
Both of the leading companies are conducting double-blind studies in an attempt to gather the most accurate data. In a double blind study, neither the researcher nor the participant is aware of whether they received the actual vaccine or a placebo– vaccines and placebos are given at a 1:1 ratio to participants– as to reduce bias on either side of the study.
Albert Bourla, CEO of Pfizer is confident, given the data from the previous testing phase and the data being gathered from the current study that a vaccine could be ready for emergency distribution prior to election day, though this has been speculated to be very unlikely.
Moderna recently released a statement that it would not be until late November that they applied for approval from the FDA, the earliest being November 25.
However, the FDA recently released new guidance articulating how it will permit for COVID-19 vaccines to enter the market. These new, revised guidelines most notably add a 2-month follow up duration to all phase 3 studies, which would effectively prevent a pre-election vaccine approval. These new guidelines are intended not only to ensure the safety and effectiveness of any approved vaccine, but also to deter political influence from interfering with the testing process.
While many speculate a potential vaccine could be available to the general public by as early as late November 2020, others believe in a more conservative estimate of late January or February, if not later.
While a vaccine may seem like the final blow to end the Coronavirus pandemic, this may not be the case. The vaccines under development from Pfizer and Moderna are not guaranteed to prevent transmission of the virus 100% of the time. Rather, their purposes are to potentially prevent transmission and reduce the severity should someone contract it.
The distribution of a vaccine will likely not come as rapidly as many hope, and it may not remove the dangers of the virus completely. Many scientists agree that the widespread use of masks and social distancing could be more effective than any potential vaccine. As we continue to live our lives in a COVID-present world, it is important to continue to wear masks in public settings and follow social distancing procedures.