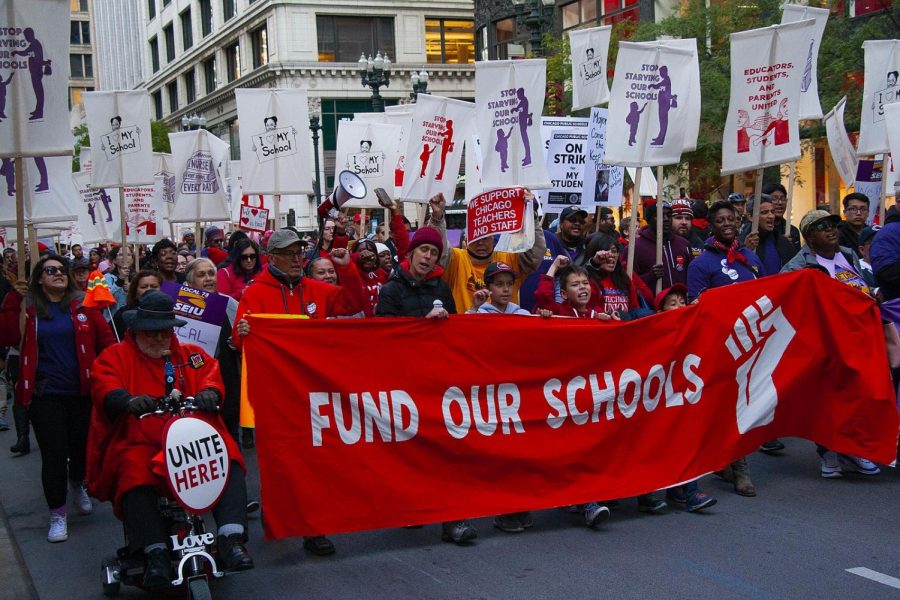 Teachers unions have the same goals as any other union: to protect and advocate for the rights of their members. These rights include fair work hours, proper compensation, benefits such as insurance, safe working conditions and fair employment and termination practices. Prior to teachers unions, many teachers were not afforded the same rights as other laborers, let alone those of private sector employees or more powerful figures in education and government.
“Teacher unions are a way to protect those rights that we expect as citizens,” explained Sarah Miller, Wydown Middle School social studies teacher and president of the Clayton National Education Association chapter. NEA is the larger of the two main teachers unions in the U.S., along with the American Federation of Teachers (AFT). Both unions have national, state and local or district level chapters that work in liaison with school administrations and union leadership.
NEA and AFT both originated with the organized labor movements of the mid to late 19th century and early 20th century. The AFT was first formed in 1916 as an alternative to the NEA, which was formed in 1857 and mostly represented school administrators at the time. As the Labor and Working Class History Association explains, AFT prohibited administrators from joining and proudly presented itself as a labor union, in contrast with NEA’s goals to professionalize education through legislative influence. However, since then the goals of the AFT and NEA have mostly aligned; the two unions have worked together through the NEA-AFT Partnership for the last two decades.
Throughout the 1960s and 70s, teachers unions staged strikes and lobbied for more funding, equal pay, protections for pregnant teachers, a uniform salary schedule, and other rights. Both unions were heavily involved in advancing civil rights, refusing to hold assemblies in cities with segregation laws and supporting voting rights for Black teachers.
During the 1960s, teachers unions also worked alongside other labor unions to gain collective bargaining rights, or the ability to negotiate as a group with employers. Teachers unions, along with other public sector employees, had to gain these rights on a state-by-state level, due to the fact that the National Labor Relations Act – a landmark labor law passed in 1935 – protected collective bargaining rights for private sector employees only.

By the time the 20th century came to a close, the NEA and AFT had emerged as prominent and powerful voices in liberal American politics. Today, they advocate for equitable policies in education, fair funding for school districts and protections against active shootings in schools. Both unions maintain involvement in political lobbying and contribute to mostly liberal causes, including Democratic congressional and presidential campaigns. According to the Center for Responsive Politics, NEA has contributed almost $24 million to federal candidates, parties and outside groups in 2019-2020. AFT’s contributions total $13 million. Out of both unions’ contributions to parties and candidates specifically, over 95% have gone to Democrats.
Within the Clayton school district, many teachers are members of the National Education Association. Each building has NEA representatives, whose job is to represent and advocate for the building’s NEA members.
“My primary role as a rep in this building is to represent the concerns, needs, questions, whatnot, of the NEA members who work at the high school,” explained Justin Seiwell, Speech and Debate coach and NEA representative for CHS. “And I will represent their concerns to either the CNEA, the larger organization that covers the entire district, or straight to our own administrators here in the building.”
NEA members in the district are also represented by Miller in her role as district president, who coordinates between Clayton teachers and the statewide Missouri NEA chapter. Miller sits on the salary negotiation committee, meets with Superintendent Sean Doherty every week to communicate the needs and concerns of NEA faculty members and generally serves as an advocate for teachers’ rights.
Miller added that her role as a member of a teachers union is not just to advocate for teachers, but to work on improving educational policy for students as well.
Seiwell agreed that teachers unions are beneficial for students, not just for teachers: “If I see that my administrators or somebody in my school district is doing something that would disadvantage a marginalized student or a student who’s already marginalized, I feel empowered and a little bit emboldened because I have this massive union backing that I can march right up to my superintendent – I could walk right into his office and say, ‘this is a problem and it needs to be fixed.’ And I’m not afraid to do that. I don’t have to fear for my job.” Many teachers feel that unions provide a level of security that allows them to stand up for their students and safely promote equity in education.

Teachers unions have gained increased prominence this year, as many have made headlines for their political mobilization in support of the Biden-Harris campaign, as well as their stances against school reopenings. In June, AFT and NEA were among the 454 organizations who joined The Leadership Conference on Civil and Human Rights to sign a letter to Congressional leadership calling for police reform. Many unions were also successful in delaying school reopenings nationwide and were responsible for the implementation of increased safety precautions in schools. However, many union leaders continue to argue that teachers haven’t had enough power in decision-making amid school reopenings. Some members of the Clayton community feel the same way.
“I think [teacher input] could be improved. I think that the challenge is that the administration is balancing every stakeholder,” said Miller. “ […] They have a very hard role to play, and walk a very fine line between the pressure from the community and the peer pressure from what their peers are doing across the group of St. Louis County superintendents. And then they have their pressure of what they feel is the best decision for the kids.”
Seiwell furthered that the level of teacher input has been “mixed.”
“A committee was formed at the very beginning of the summer. They met for a few times and that was it,” he said. “And then we were asked to apply that if we had a personal reason that we would not be able to expose ourselves into the building. There was an application process for if you wanted to teach from home for the entire semester. Beyond that, I think most teachers would argue that there hasn’t been a substantive push for input from teachers as far as what’s workable and what’s reasonable.”

However, both Seiwell and Miller explained that some concerns raised by teachers have been considered during Clayton’s transition to in-person learning. For example, teachers were instrumental in the decision to omit lunch from students’ schedules at the middle and high school level.
Nationally, many major school districts pushed back reopenings until later in the fall under pressure from teachers unions. However, with many districts forced either to delay transitioning to in-person learning or to close their doors again as cases surge in the U.S. for a third time, the debate has continued over whether schools should remain open.
Miller explained that there is still substantial uncertainty surrounding what is the safest decision in terms of reopening.
“There’s not that many studies that really prove either way,” she said, explaining that there are differing opinions on how easily the virus spreads in schools and whether school reopenings are contributing to higher hospitalization rates.
This lack of scientific consensus has led to mass disagreement and unrest over whether a fundamental sector of our economy and society – K-12 education – should continue to function as normal amid unprecedented and possibly unsafe circumstances. Though there may not be a right answer, teachers agree that their voices, experiences and collective power represented by unions matter now more than ever.