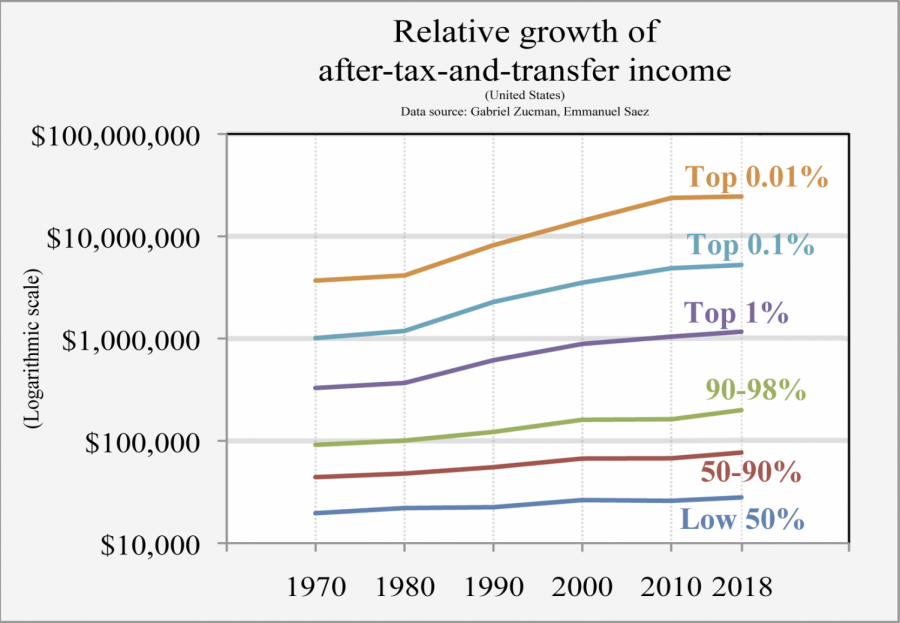 Economic inequality has existed since the dawn of civilization, with a divide between the leader and the ruling class and the rest of the population. Our economic systems have evolved since then through systems such as feudalism, mercantilism, capitalism, and communism. However, much of the inequality we see today exists in capitalist systems. In 1776 a relatively unknown Scottish philosopher, Adam Smith, published his magnum opus “The Wealth of Nations”. Smith called for the end of the mercantilist system and advocated for the elimination of tariffs and the creation of free markets. Smith believed that the markets are guided by an “invisible hand” where every person acts by their self-interest. Smith helped to create the modern capitalist system focused on the free trade of goods, the ownership of capital, the rewarding of risk-taking and innovation, and markets controlled by supply and demand.

Smith wrote on capitalism at just the right time, as the Industrial Revolution was beginning in the United Kingdom. This time saw a massive amount of technological changes and the creation of modern corporations. With the first steam mills and textile factories, the Industrial Revolution was born. This soon saw the massive accumulation of capital in the wealthiest one percent of individuals. By the end of the 19th century, individuals such as JD Rockefeller, Andrew Carnegie, JP Morgan, and more had billions upon billions of dollars while the people who worked for them barely had any money for themselves.

This massive separation of wealth between the richest and poorest people and the often horrid working and living conditions that poor people had to live in promoted German economist and philosopher Karl Marx to write his critique of capitalism. In his book Das Kapital, Marx outlines his belief that capitalism is based on the exploitation of the proletariat, or the working class, by the capitalists and the legal system that hurts the rights of the workers. Along with fellow economist Frederich Engels, he then goes on to outline in The Communist Manifesto that the history of the world is a history of class struggle between the proletariat and the bourgeoisie and that the only solution is a revolution where the workers seize the means of production from the bourgeoisie and redistribute it. In this, Marx offers a solution to economic inequality through violent revolution. Marx believed that the government relies on the oppression of the workers, which leads to the question of how inequality is measured.
In 2013, Thomas Pickety published one of the most important books on inequality, Capital in the 21st century. He argues that when r(return on capital) >g (economic growth), wealth becomes concentrated among the top percentile earners and causes economic and social instability. By looking at the return on capital rates and then comparing it to economic growth, we can start to get a picture of increasing inequality. But how do we measure that inequality once it exists? One way to do this is by using what is known as the Gini coefficient, named after Italian statistician Corrado Gini. The Gini coefficient measures inequality from a scale of 0-1. A Gini coefficient of zero would mean all the wealth of a country is shared equally, and 1 would mean all the wealth is concentrated by one person. Pickety calculated the Gini coefficient for the U.S. and compared it to other countries, as well as modeled it to look into the future. He has the United States in 2010 at .36. Today it is 0.414 according to the World Bank, nearing the very high inequality he forecasted for 2030. This presents the question of how inequality shapes politics.

One of the largest reasons for Donald Trump’s victory in 2016 was inequality. Many of his supporters, especially ones from the upper midwest Rust Belt region, felt left behind by the country. They watched the “coastal elites” get rich and run the country while they became unemployed as blue-collar jobs moved overseas. This pent up anger, similar to that anger that Marx described, led to revolution in the form of the election of Donald Trump. A similar movement was the Occupy Wall Street Movement in 2011, which aimed to alleviate the power of Wall Street. They again saw themselves as the proletariat who were abused by the bourgeois. That movement helped to bring to the national spotlight Senator Elizabeth Warren, who ran for the Democratic Presidential nominee in 2020. Another example of how inequality influences politics is the rise of Senator Bernie Sanders. In 2016, Sanders called for the elimination of student loans, Medicare For All, and taxing the wealthiest one percent of Americans. He proudly calls himself a democratic socialist,. Sanders used the same pent up anger felt by the left-wing to help fuel his rise. Many young Americans feel crippled by the cost of student loans and left out by an economic system that seems to reward everyone else but them. Sanders grew a loyal – almost cult-like – following because of this message. Today’s young people have had a harder time than most trying to make it in today’s economy. Increasing costs of living in the largest cities, the high cost of college, and a more niche job market have all contributed to many millennials left behind. They look to the wealthiest Americans, who seem to be everywhere – especially on social media. This again led young people to vote in massive numbers for progressive candidates such as Congresswoman Alexandria Ocasio-Cortez, Bernie Sanders, and Elizabeth Warren. This trend again was seen in 2020. Counties that President Trump won produced just 29 percent of the nation’s economic output, while Biden counties accounted for the remaining 71 percent. This shows that Biden counties have much more economic output and thus are wealthier, while Trump counties have seen a smaller share of income. Trump counties seem to have been left behind by the 21st century. Most of them are mostly agrarian or working class, and many of those working-class jobs have left the country. Which poses the question, where does the future of inequality take us?

As more and more jobs become automated, humans are going to become less and less important. This trend is being seen today. Many of the largest companies in the world by market cap have relatively few employees. Google, Apple, Facebook, Microsoft, and Amazon don’t need that many people to work for them. While these companies have generated lots of wealth, there quite simply is not a very large managerial class in these companies and much of the wealth is held by a handful of top executives. Also, the rise of AI and automation will lead to a changing job market focusing on technology and programming but many people quite simply cannot be programmers. Andrew Yang a 2020 Democratic Presidential candidate made this issue a large part of the platform calling for a universal basic income of 1000 dollars a month. A rise in automation and a lack of jobs could lead to what is called by Israeli historian Yuval Harari “the useless class.” This group of people will have very little importance both politically and economically and will have been left behind by society. This, as history tells us, will lead to anger and possible revolution. In
So what can we do about inequality? There is no one answer to this very complicated question. French economist Thomas Picketty argues for a 90 percent wealth tax on all capital worth more than a billion euros. This would help to limit the spread of dynastic wealth, as well as fund welfare programs. Other solutions include higher estate taxes or some sort of basic income provided to every person.

In conclusion, inequality is one of the most important social issues of our time. If this continues to worsen, the future of democracy could be at stake.