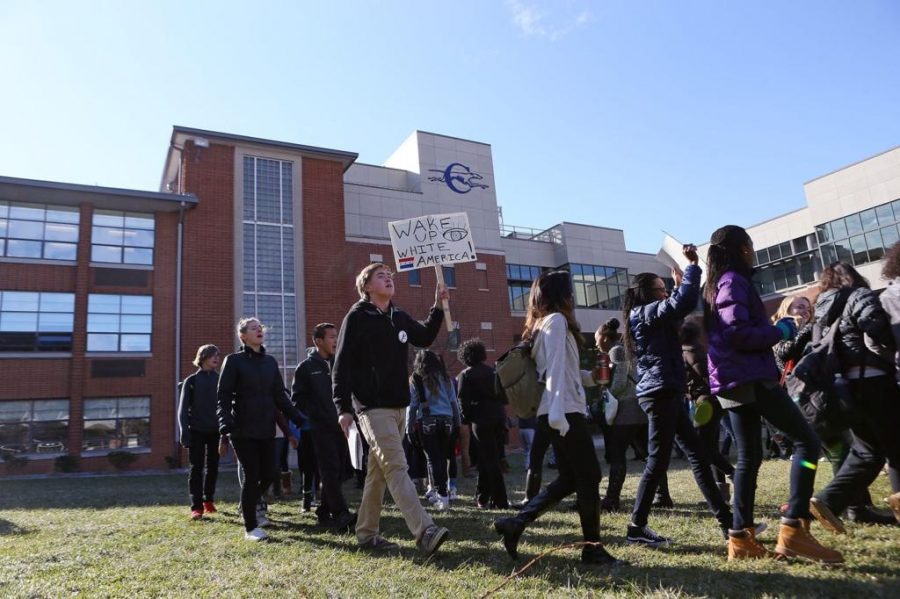 The Clayton School District is a stand-out school district for a myriad of reasons. It’s ranked in the top 5 Missouri schools, and has a largely diverse student population. Another thing that sets Clayton apart from other school districts is the sheer amount of student activism that’s been a part of its history for years. Whether it was 16 years ago when students were protesting the ending of a diversity program, 6 years ago when students held a walk out in the middle of a school day in response to a grand jury ruling, or even just last year when kids all through the district held, organized and attended George Floyd protests. Activism has always been carefully intertwined with students’ lives in Clayton.
This activism begs the question: why? What in Clayton makes students so much more inclined to voice their opinions about serious issues when compared to other districts, states and even countries?

A “Quick” History of Activism in Clayton Schools

Buckle up folks! Students have been doing this for years. The most recent was in mid-2020, where tons of students organized and attended Black Lives Matter protests as well as posted black squares in a show of solidarity with the movement on June 2nd. It goes back to the mid-20th century, when CHS had THE Jackie Robinson visit CHS before St Louis was desegregated (We’ll delve deeper into that later) . CHS students have a history of participating in international causes, like the George Floyd protests mentioned above, or the 2019 global climate march that happened in downtown St. Louis. Some might remember that in the March of 2018, Clayton high schoolers held a walk-out just one month after the Parkland shooting, just like hundreds of other high school students across the country. These are all amazing, but what about more local ones? Protests that are directly tied to Missouri, or even Clayton High School itself? Well, there’s a ton of those too.

Did you know that Clayton students once held a die-in? It was in 2014, a couple months after the death of Micheal Brown at the hands of a cop. The student protesters had a walk-out first, but after the time spent outside with signs criticizing cops and supporting BLM they moved to the cafeteria. There, students lied down in silence for 4.5 minutes. A CHS junior was the head organizer for it.

To go even further back, in 2012 the Westboro Baptist Church decided to do one of their protests at CHS. If you didn’t know, the Westboro Baptist Church is a very anti-LGBTQ church that goes around the country protesting with signs reading “God hates fags”, “Sin and shame, not pride!” and things of the like. In general just a bad group of people who came to CHS in protest of the GSA (Gay-Straight Alliance). CHS GSA members held a counter-protest, getting people all over St. Louis to come support them, rather than the Westboro Baptist Church. Students had a peaceful response to a frankly disgusting and infuriating message. Some former Globe members even had an interview with one of the leaders of WBC.
For an even more local example, in 2011 CHS students fathered in the front yard of the school in protest of a football coach getting fired. The coach was getting fired for a MSHAA violation. Students were not happy with this. A group of at least 250 students gathered and started chanting things along the lines of “Bring him back!” and “Bring back the coach!”. Some Kids that didn’t even play football went and spoke about how much he meant to them. In the end, he ended up remaining as a teacher and a coach. 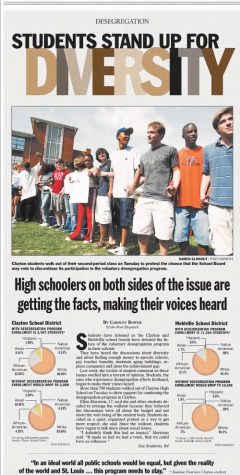 In 2004 there was a desegregation program throughout all Clayton schools that was almost cancelled. While CHS at the time still had a predominantly white population, the program still helped diversify the district. The reason it was going to end was because of budget concerns, and not concern for the student body. When the program was threatened, 700 students held a walkout in the middle of the school day. Clayton would end up keeping the program, continuing for another 5 years.
Straying away from protests, even further back in 1953 Jackie Robinson and his teammate, Carl Erskine came to visit and talk to students. They gave a 40 minute presentation focusing primarily on race, and at the end both men stayed and spoke with students for a bit. This was before St Louis was fully desegregated. Forest Park still had separated water fountains at this time, and Robinson would be staying at a different hotel than his teammates. It’s not a protest, but one can’t deny that this was a big deal, and a strong step forward for Clayton at the time.

What Makes Clayton Different?
The Clayton School District is a very diverse place. Even without statistics, if you look into any classroom at random you’ll see a class full of people of differing races, ethnicities, sexualities and genders. Such diversity leaves little room to not care for others. You want your peers to be happy (or at least not hate-crimed) , and if something is in the way of that, you’ll want to try your best to stop that. It’s a lot easier to care for a cause when you see the victims.
Another thing that sets Clayton apart is the curriculum. Clayton offers classes that others may not like gender studies, sociology, as well as multiple units about the Civil Rights Movement in most required history classes. In 8th grade there’s a very long (and very interesting) unit dedicated to learning about world religions. Education about people fighting for equality and general education about minorities and people different from you will lead to a better understanding of those people and their struggles.

It’s also in our teachers. Quite a few years ago a woman named Maggie Dagen. She taught at CHS for about 17 years, her classes on topics like labor relations, contemporary issues and human relations with a focus on race. She and her husband Irvine founded the St. Louis Committee of Racial Equality (CORE) which held meetings once a week and organized protests for desegregation. When Jackie Robinson visited in 1947 (not the trip where he spoke to CHS students) they offered him their home. Maggie’s goal for the 17 years she was teaching at CHS was to try to get her students leaving her classes with more of an open mind an a willingness to criticize and question what they’re told. Not only did she do that, she left a lasting impact on CHS, their faculty, and by proxy, the Clayton School District for years to come.

Clayton is also in St. Louis, one of the few counties in Missouri that is largely liberal and democratic. All of these factors combined leads to an almost perfect environment for people to fight for others. An environment like Clayton nurtures their resident’s interests in things like social justice, civil rights, and protesting; and in Clayton schools it’s amplified. Students get to watch other students fight for them, or get to fight for other students. Clayton and it’s school district have their issues, but a lack of community isn’t one of them. This incredibly great sense of community is curated; and that’s why Clayton students are so passionate about activism.