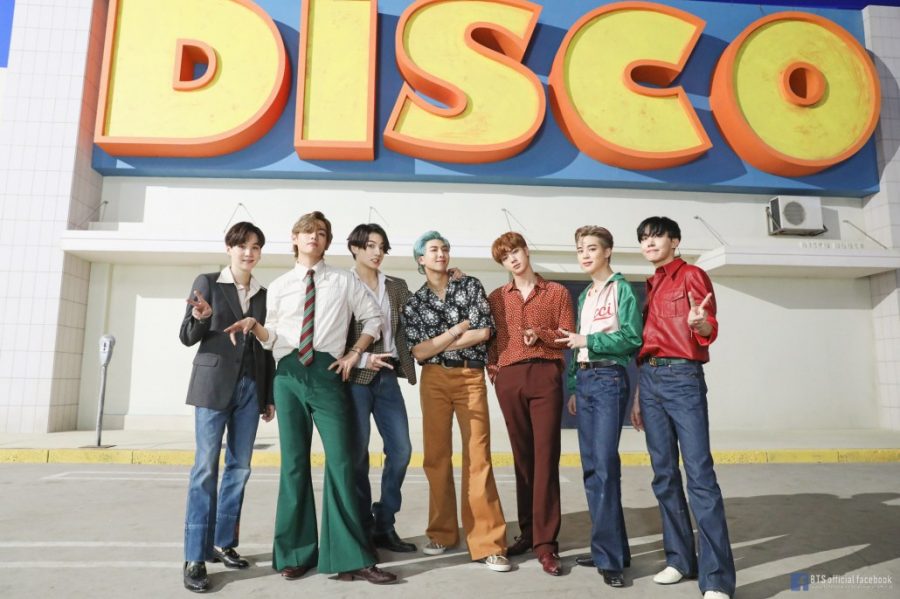 BTS on the set for their English single "Dynamite"

When you think of a boyband, what do you think of? Do you think of One Direction, making teenage girls’ hearts throb with each song lyric? Maybe the classic show Big Time Rush and their absolute bop of a song Boyfriend? I’ll tell you what most people don’t think of: K-pop.
And if you did think of K-pop, you probably thought of BTS. They’ve been in the spotlight a lot lately, but still get dismissed as “just a boyband” by a lot of people. The thing with saying that though, is that BTS is more than just that. Their impact on the music industry, their fans, and even politics sets them apart from a stereotypical boy band.
Musical Impact
One of the bigger ways BTS creates an impact is through their music. It may be obvious considering they’re musicians with a huge following, but BTS’ popularity makes them more than just a household name, it makes them activists. Even though BTS has fun, playful songs throughout their discography, a majority much stronger messages about things like mental health, loving one’s self and even political commentary. Every song BTS makes has the ability to make someone connect with it, regardless of how well they understand Korean.

Messages within their songs aren’t baseless, either. In their Love Yourself series, they have multiple songs about loving yourself and the journey that comes along with it. Instead of the “Love yourself because you’re you!” and commercialized self love we’re used to getting sold from western artists, BTS’ lyrics are more personal, with talk of their own journey rather than just telling the listener to do something. Their song “Love Myself: Answer” from their Love Yourself series is the epitome of this, with lyrics about self forgiveness, self-love and the struggle that partners to those. The ending verse (when translated) has the line “I’m learning how to love myself, with exceptions, it’s all me”. It’s direct, but the message is there. Rather than just telling you to love yourself, they share their own journey with doing so.
In WINGS, one of their earlier albums, there’s a lot of commentary on Korean culture, but Am I Wrong stands out the most. At first listen it seems like a fun, funky song but a glance at the lyrics shows otherwise. Am I Wrong mentions many problems, one of the more noticeable ones being a reference to a South Korean politician. The line is “We’re all dogs, pigs, become dogs because we’re angry” and called back to when he (the politician) said Korea needed a caste system, and that most Korean citizens deserved to be at the bottom and treated like dogs and pigs. To match that, they also have the line “Stork vs. crow-tit warring errday”, a reference to an old Korean proverb that can be tied to lower class vs higher class (technically it’s about trying to be something you’re not, but that thought is still very present in class conflict)
International Reach
BTS is based in South Korea, but that doesn’t mean they’re limited to there. They have a huge international reach, big enough to be called the biggest boyband in the world by CNN. BTS pretty actively pushes themselves into an international eye. They’re big enough globally to not only give a speech at the UN, but to have been partnered with UNICEF for an anti-bullying and anti-violence campaign since 2017. In their 2018 speech at the UN, the leader, RM (also known as Kim Namjoon), spoke for just over 5 minutes. 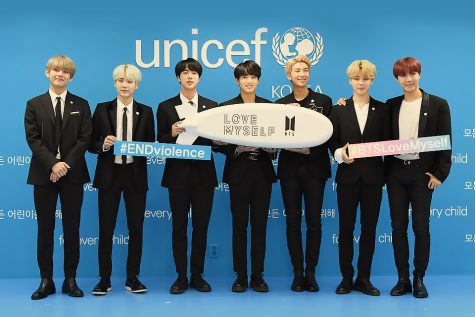 In his short, but powerful speech, he chose not to promote their music, but to promote their message instead. RM speaks about both his personal life and the group’s, and ends with the line “So, let’s all take one more step. We have learned to love ourselves, so now I urge you to ‘speak yourself.’” “Speak yourself” has become a staple in their brand, and with such an impactful message, it’s hard to stay local. Even if BTS wanted to stay in Korea, they wouldn’t have been able to.
Messages aside, just looking at their content shows they have a large global audience. Japanese albums, singles and versions of songs, and an English song that went viral late last year (it’s called Dynamite, you’ve probably heard it a few times on the radio). World tours aren’t exactly produced content, but they’ve done quite a few, traveling through most of Asia, Europe, and both Americas. BTS even had one planned for last year, but that was (obviously) put on hold.

Fighting Xenophobia
I talk a lot about Asians/being Asian in the West, but it’s for a real reason. It’s not easy to find stories and experiences of Asians living in the West because we’re usually overshadowed or silenced by others (the model minority myth doesn’t help Asians, it just alienates and silences us further–but that’s a topic for another day). As BTS gets more popular in the West, they’re going to be seen more in western media. Them getting more popular in the media however, carries more weight than just “ They make more money and get more popular”. Being Asian in Western circles comes with experiences with racism and xenophobia in very specific forms. It comes as never seeing people that look like you on TV, kids seeing your home lunch and being disgusted, or an accent/traits you don’t have to get made fun of. It’s less violent that most racism (though with COVID-19 it has leaned more towards the violent side of things), but it’s still racism. With more Asians in the media, it’ll be less “weird” to be Asian. BTS receiving the validation from Western media sources (though they don’t really need, it seeing as they’re hugely popular throughout all of Asia) means they’ll be respected more, and in turn Asian identities will be, too.

BTS does this really cool thing where they proudly showcase their culture. In their IDOL music video, there’s tons of references to Korean culture, both in the background and their outfits choices while they dance (wearing Korean hanbok). In general too, in most of their produced content made in their 7 year career, such as Run BTS!, a show produced by their company where the seven of them just do fun activities for prizes and such and their music is made in Korean. BTS doesn’t modify themselves to be understood by the West, which is really cool to see especially when most Asians are usually told or even forced to change when they just exist in the West.

They’re More Than What You Think

BTS’ impact on the world, the impact they have despite all the racism and challenges they’ve faced, makes them one of the most influential bands within the last 20-30 years. The platform they’ve created for themselves is huge, so big some creators only dream of having it. And they use that platform for good! They regularly donate to charities and organizations, not because it’s good for their images, but because they actually believe in them. BTS is more than just a boyband, they are activists creating fast and big change in the world.