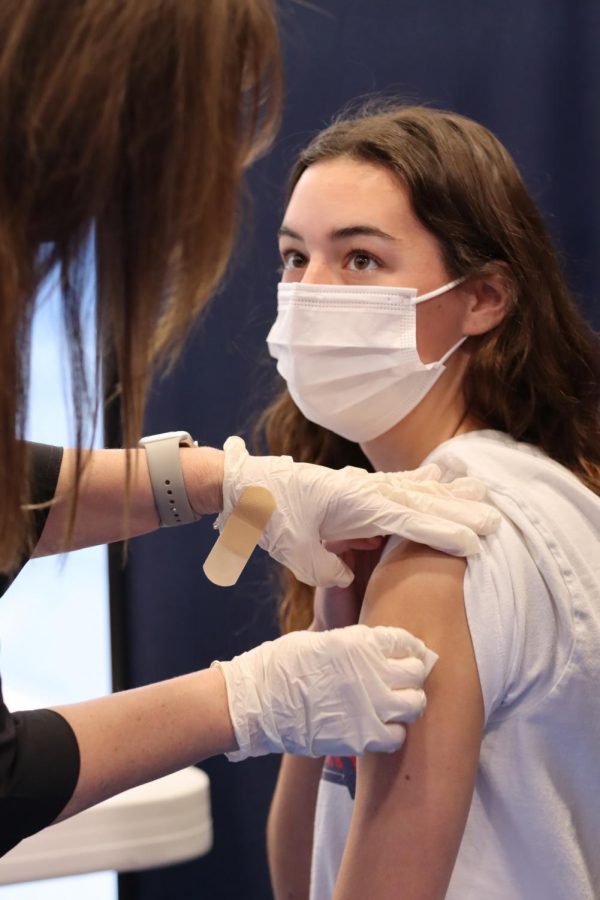 Ever since the pandemic began back in March 2021, science was the school subject that made us want to tune in to different news channels to see the rapid history of Covid-19 since the start of lockdown. Many drugs and vaccines have been tested in different laboratories along the way with blunt results, dull as a pencil. In the end of 2020, the Pfizer vaccine was 95% effective and started being distributed to different adults, along with other vaccines such as Moderna and J&J which came later. Teachers started getting their doses at the beginning of March, but it was the week of April 12 that sixteen-year-olds became part of the science of these vaccines, which drove our school district to think about how to start next year.
On April 21, 2021, students at CHS who were at least 16 as well as other teachers, received their first doses of the Pfizer vaccine live in Stuber Gym. According to our district’s Instagram page, the number of students who got their first dose of the Pfizer vaccine between 11am and 3pm was over 600, roughly two-thirds of the 877 high school students at Clayton. Perhaps we may not have much longer to go for the rest of the age group. At the rate we are going, it was older adults and health care workers at the beginning of the year, teachers came weeks later, then people eighteen or older, and the week of April 12 was when sixteen-year-olds were eligible. I interviewed sophomore Ruby Nadin, who is at the bottom of the age limit as of right now for getting these vaccines, and English teacher Mrs. Dana Augustine, who also received her first dose of the Pfizer vaccine at CHS the same day.
There’s always a lot of feelings as the date comes up. “I was really excited because I really wanted to get vaccinated,” said Nadin. “I’d be able to do more and go to England to visit family.” Even young people and teens were looking forward to doing what they have missed out on for over a year, after COVID-19 started spreading in the whole United States in mid March of 2020, and international travel was restricted and deferred by the CDC in February that year. For Mrs. Augustine, since she is a teacher who was eligible since the end of February, she went by the distance that drove her to excitement. “The clinic was convenient because I was already at work,” Augustine explained, “so I could just walk down the hall to get my vaccine.”
Most people after the vaccine, even if our age group and even before the clinic was held, they are least likely to suffer sickness and fever from the vaccine as well. As usual, “before the shot I felt pretty good, I was pretty confident about it. I was a bit nervous,” Nadin described. “I haven’t gotten sick yet but I’m waiting for the second shot so we’ll see.” The appointments we made for Wednesday’s trials will not change, and the same people will get their second dose of the vaccine on May 12, an interval of three weeks. Mrs. Augustine described her reactions and nerves to the vaccine like a process. “Before I was slightly nervous. Everyone working at the event was nice and helpful so that made me feel more relaxed,” said Augustine. “After the shot I was surprised at how quickly it was over. I felt mostly fine; for 24-36 hours after the shot, I felt really tired and thirsty.”

This vaccine clinic is also a major sign of what to expect next year. Back in March this year, the School District of Clayton expected for everyone all ages to be immunized from many other common diseases so we can adapt a clean-up to start fresh on August 23; such as hepatitis B, measles, meningococcal, varicella, and many more on their ‘Featured News’ at ClaytonSchools.Net. Covid came later in this scenario when older teens under 18 became eligible for immunization from the pandemic. “I definitely expect the majority would’ve been vaccinated by next year, I assume Clayton will make it mandated to get vaccinated,” Nadin says, “if you want to come back full time with no masks I would expect them to kind of make it more of a requirement.” Ms. Augustine understood that our readiness for next year had to lay back. “I honestly am not thinking about 2021-22 at all,” she says, “we still have the rest of the year to get through and a summer vacation to enjoy.”
The key is, I can’t suffer another chaotic year myself. For my class, there has not been one year where we have been inside CHS the whole time, and next year would be a good chance for that to happen now that we have adapted resources for doing so. If we are doubling social distancing and dividing it by two in the classroom, we need to try doubling everything else as well, because the previous lack of resources sabotaged it in the beginning. There is no evidence of in-school transmission of Covid-19. We also can’t delay this regular experience for the lower classmen, and there are still many things we need to experience at Clayton on a normal basis.