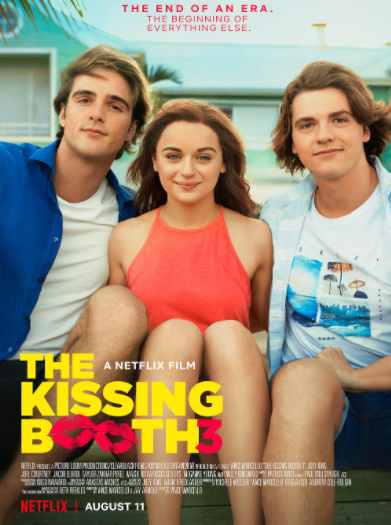 Kissing Booth 3 is a toxic ex that you keep coming back to for no reason. You just can’t get rid of it, there didn’t need to be the 3rd one but Netflix made one anyway. It’s like poison. It’s a flower that has been stabbed and dried up. In conclusion, it was complete garbage.

The second movie is all about a dance competition. Elle did the competition with Marco, and that led to some jealous behavior with Noah. At the end of the movie, Elle kisses Marco, cheating on Noah, and they almost broke up but they lost trust in each other by thinking they were both cheating on each other. Both people are very insecure and it won’t make it any better once they’re in a relationship. In the third movie, Elle wants to, before summer is over, complete her summer bucket list with Noah and Lee. The movie stars Jacob Elordi, Joey King, Taylor Zakhar Parez, and Joel Courtney.

Throughout the entire movie, Elle and Noah represent a toxic relationship as they kept fighting, seeming like everything was ok, then fighting again. There was no reason for that and it made absolutely no sense. As the movie is also titled “The Kissing Booth 3”, there was almost no relation to the kissing booth at all until the end of the movie, when they grew older and went back to reunite. It didn’t make too much sense, as the movie was one big chaotic mess.

This movie was so bad to the point it wasn’t even funny. The plotline was trash and had no purpose. It was just them running around and getting mad at each other and it was like they were trying to be funny but it just wasn’t. Madeline, a Sophomore at Clayton said, “You know the movie is awful when there’s no plot but you can still predict everything that happens.” Margaret, also a Sophomore, stated “When your standards are already so low for Netflix Movies and then the kissing booth comes and you just keep thinking ‘who approved this?”. The movie’s plot had no depth and no uniqueness to the story. It’s just an overused trope with basic characters and storylines. The characters have no unique personalities and it’s very overdone in many movies which makes it annoying and boring to watch. The storyline too is also bad because in the third movie there was no storyline but also the storyline felt very basic and uninteresting.

The characters are also complete garbage. They have no depth and are so shallow. Elle in the movie has no respect or kindness and she is selfish. She is so self-centered, she doesn’t understand what she is doing to the people around her. For example, her dad started dating a new woman and Elle didn’t like that. The woman was being so nice to her and being understanding of Elle having lost her mom, but Elle didn’t want her dad to be happy and only cared about her own happiness. She threw a complete temper tantrum and was yelling at her about how she is not a good person and that she hates her.

Elle throughout all the movies had no character growth which she really needed. Noah is a bad person because he gets into fights everywhere he goes, can’t accept things that aren’t in his favor, and is just overall toxic. He is super controlling of Elle and gets jealous very easily. Noah also has anger issues and has taken it out on Elle before which is abusive. The relationship between Noah and Elle is very toxic because they kept on breaking up and coming back to each other. And they kept on breaking up because they did not trust each other, and good relationships need to have good trust. Lee is possibly the worst character ever seen. When something happens that he doesn’t want/like you will see him having a mental breakdown. When Elle chose to go to a different college than him, he got so upset. Noah and Elle’s relationship isn’t genuine and they get into way too many fights. He is very fake and selfish and tries to make everything about him, and always manipulates her into feeling bad. Overall there is no character growth which makes it very frustrating to the viewers.

The question is how did Elle get into Harvard. There was no mention of her being extra smart, or “gifted” throughout the movie. The movie did not show Elle working extremely hard and putting real effort into getting in, which is a bad representation for the community. It sets unrealistic standards that cannot be usually met.

Elle also all of the sudden became interested in designing games. She was never portrayed in any of the movies to have any interest in the arts or to be good at them. It was very confusing because she never mentioned having any interest in it. Which makes it very confusing for the viewers. The producers of the movie should have done better because it’s very sloppy, especially in the character design because someone cannot just develop interests on the spot and be automatically good at it.

Most of the people who are watching these movies are younger than 11. And watching this stuff at a young age can definitely give you the wrong idea of how relationships work and how to act towards other people. The production of the movie itself is also bad. This movie isn’t worth watching. Or any of the movies to be more exact. As you go on the movies just get worse and worse. It’s the worst of the 3. No plot, no point, bad characters, bad purpose, bad writing. It’s a waste of 2 hours. -1000000000000000000 out of 5 stars.