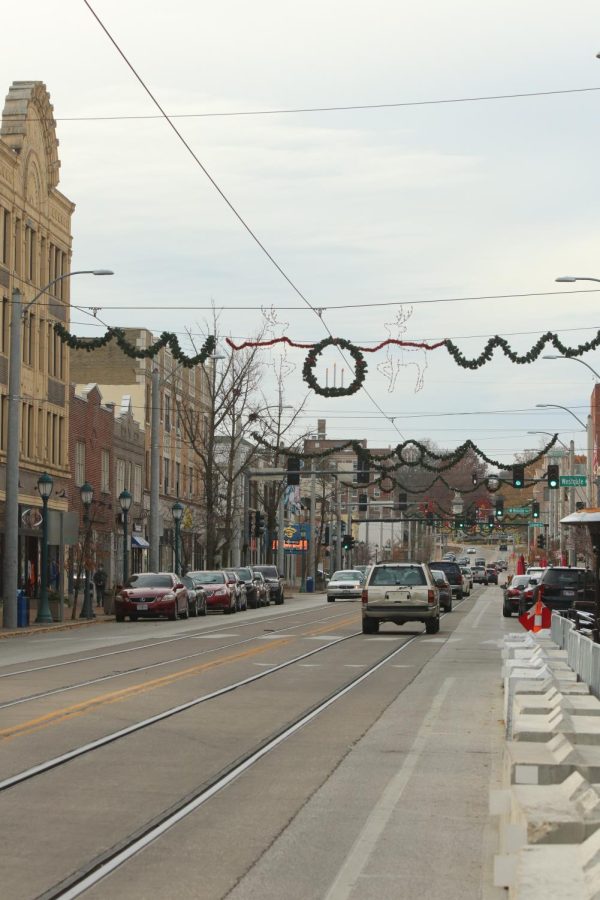 Picture of the Delmar Loop during the festive winter season

The Loop Trolley, at its inception, was hailed as one of the most significant new additions to Saint Louis in decades. What followed was years of controversy, financial struggles, and failure.

The Delmar Loop gained its name from the original trolley system that ran through it. The first streetcar system in The Loop closed in 1966. Since then, that area has ballooned into one of Saint Louis’ most popular neighborhoods for tourists and locals alike. The story of the new loop trolley begins much later thanks to one man: Joe Edwards.

Joe Edwards is the man singularly responsible for the loop as is known today. His first venture was in 1972

when he opened the now legendary Blueberry Hill. Blueberry Hill began Edward’s long career in developing The Loop into the cultural juggernaut it is today. He has since gone on to develop The Pageant, The Moonrise Hotel, The Tivoli Theater, The Peacock Diner, and more. He has since 1997 been the most visible figure in the push to rebuild The Loop Trolley.

His vision started to become reality when in 2010 The Loop Trolley received 25 million dollars from the Federal Transit Authority to begin construction. Additional funds came from private donations, Washington University, St Louis County Transportation fund, and the special loop trolley tax district. In total, The Loop Tolley cost 51 million dollars, most of which came from federal and local taxpayers.

The Loop Trolley tax district where a good portion of the money came from is not exactly transparent in the amount of money raised for the project. In total local taxpayers paid around 13 million dollars raised by the special tax district. With this much money going to the project, many hoped that it would bring a much-needed economic boost to the region. With funding secured, construction later began in 2015. During construction, many businesses on the loop noticed a decrease in foot traffic and patronage into the businesses, a grim foretelling of the future of the trolley. By 2016 the trolley had finished construction, however, it took nearly two more years of added delays and costs before the trolley was unveiled to the public in November of 2018.

Six months later the trolley had only a dismal twenty-two thousand dollars in revenue. The pattern of low ridership continued as costs continued to mount. It was in December of 2019 when the loop trolley announced it would close. That year according to IRS Form 990 filed by The Loop Trolley Company they lost close to 330,000 dollars and had 14 million dollars in liabilities.

The story of the loop trolley does not end there, however. Recently a new effort to revive the trolley has emerged. The plan consisted of around 1.26 million dollars worth of federal taxpayer money plus an additional 540,000 dollars from the special tax district. The plan was supported by both the County Executive Sam Page and Saint Louis Mayor Tishaura Jones with a few conditions. First, they wanted dissolution of the 501(c)(3) organization, The Loop Trolley Company, as well as the redirection of all revenue generated by the operation of the Loop Trolley toward Bi-State Development to oversee its operation and that no further City or County funds will be used to fund the Loop Trolley. This plan ultimately was voted down by the East-West Gateway Council of Governments. To make matters more complicated, the federal government has threatened to sue The Bi-State Development for around 25 million dollars if they did not go through with a plan to keep up the loop trolley. They also threatened to block any federal money for transportation projects in the region. If a compromise is not reached, it could lead to even more issues as the region could be denied much-needed federal funding.

At this point, many Saint Louis residents are frustrated with how The Loop Trolley turned out. What was billed as a much-needed boost to the Delmar Loop and Forest Park area turned out to be a more than 50 million dollar taxpayer-funded quagmire with no resolution in sight.