The New York Times has gained dominance in the news market, as local papers lose ground. 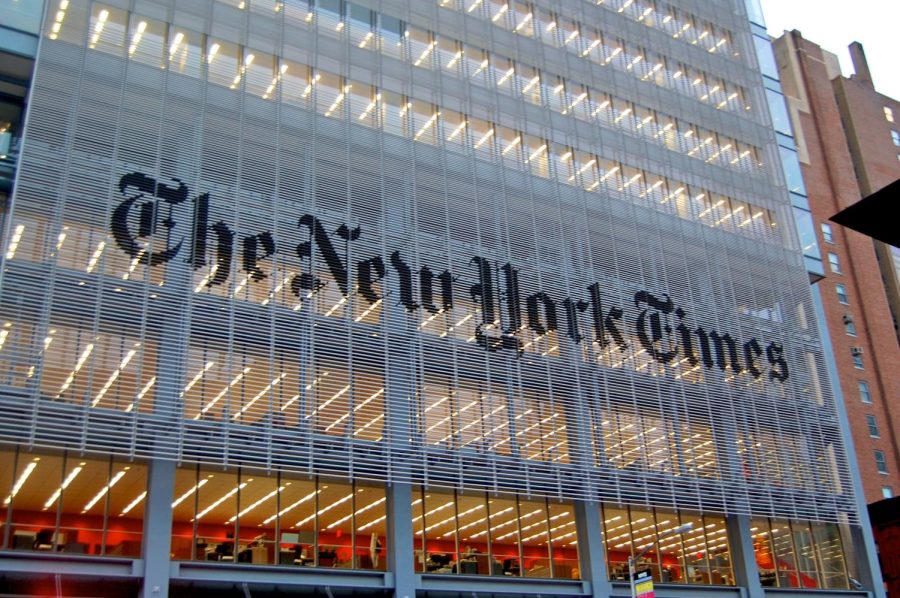 How the Times conducts itself is akin to other news media companies based in New York City. The most popular networks are attested to be CBS, NBC, ABC, and Fox; all four are headquartered in New York City and all four have cable news channels. The Times wants to be America’s Newspaper, with a 2003 annual shareholder report stating, “[O]ur long-term strategy is to operate the leading news and advertising media in each of the markets in which we compete — both nationally and locally.”

With so much influence, there’s enough capital available for a newspaper based in the metropolis to hire large teams of journalists.

“The other thing that they did that has been a big boon to their economic prowess is podcasts,” said newspaper writing teacher and Globe advisor Erin Sucher-O’Grady. “That started to pull the biggest resources in, in a different way.”

This poses a challenge to many local newspapers grounded in their communities, with a financially superior behemoth encroaching on their turf to try becoming a monopoly. The overwhelming competition present by the Times, combined with financial strain by being limited to one local readerbase, has wreaked havoc. Since 2004, about 1,800 newspapers across the nation have shut down, meaning that there’s an average of about 100 newspapers shutting down every year.

Journalists working for The New York Times are pressured into having the scope to cover news across the country.

“The centerpiece of this strategy is extending the reach of The New York Times’s high-quality journalism into homes and businesses in every city, town, village and hamlet of this country,” the Times’s shareholder report also reads. But with a base in New York City, can such a feat be accomplished successfully?

After all, a newsroom in New York City is a newsroom of mostly New Yorkers, and every article The New York Times publishes is shaped in the perspective of their metropolitan writers.

“When you are in a community, and you’re talking to people, and you know sources, you get different stories,” said Sucher-O’Grady. “If you are geographically isolated, you’re just going to miss things.”

For the Times, this is especially true in the Midwestern United States. “The Times is completely missing out on Middle America, their nearest reporter to [St. Louis] is in Chicago,” said Auston-Babcock.

There’s another problem with the dominance of the Times: internal partisanship. In a FiveThirtyEight article titled “There Really Was A Liberal Media Bubble,” editor-in-chief Nate Silver wrote about the surprise around how journalists working for the New York Times were wrong about the 2016 presidential election. “Much of The New York Times’s coverage, for instance, implied that Clinton’s odds were close to 100 percent” wrote Silver. “And yet the Times, famous for its ‘to be sure’ equivocations, wasn’t even contemplating the possibility of a Trump victory.”

What the coverage of the 2016 presidential election indicates is groupthink within the Times’s newsrooms, where outcomes are denied despite being very much plausible because of the consensus’ strength among journalists.

“If you have an idea that’s worth having, it should be able to stand up to challenge,” Sucher-O’Grady said.

The New York Times’s contribution to the field of journalism is incredible, along with the coverage the Times provides. The Times can easily mobilize resources and manpower to investigate any event that’s anywhere across the globe. However, it’s alarming that one newspaper company from one region of the country is increasingly becoming the sole pair of lenses among newspapers.

The majority of Americans have only one newspaper subscription.

If New York City’s top newspaper ends up at the helm of the rough draft of history, it sets off a chain reaction where a problem within the Times becomes a problem for all newspapers.