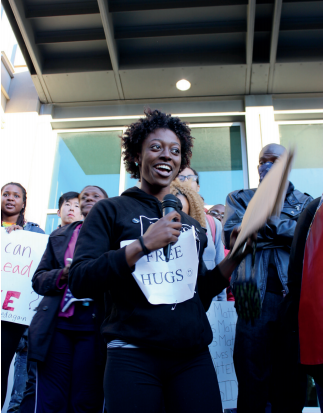 Students stand up and speak out in order to be heard

“I really am a protest girl at heart. I go to protests whenever I can. I love the atmosphere of a protest and the community within a protest,” said CHS senior and social activist Brooke Jones.

“When Michael Brown was shot, there was something that sparked inside me. After the shooting, I began to attend protests,” she said. “Many times, people only see the negative side of a protest through the media, but when you are actually in the crowd, it is a whole different story. It feels like you’re in a family and your voice is heard in that group.”
Under a Trump administration, Jones adamantly holds firm to her opinions. “The many recent, radical executive orders which have significantly divided the country are one of my main concerns,” Jones said. “The government is discriminating against certain people. Rather than being a government that caters to the population as a whole, the government is only catering to a selective group of people, and that is always a concern.”
In an attempt to address this rift in the country, Jones has not only participated in protests, but has also communicated with many activists in St. Louis including those who organize and lead the demonstrations she attends.
Jones has also been trying to reach out both to the Representatives of Missouri and also to the people who have come to represent the School District of Clayton.
“I am also trying to talk to the administration on a more community based level in order to find and fix the issues that we have in our own Clayton community,” she said.
Beyond creating a constructive dialogue between the students and administration of Clayton, Jones hopes to encourage discussion between both Clayton and Ladue students.
“I also have been working on forming the discussion group for a while now. This discussion group would have students from Clayton and students from Ladue and be a forum to voice their concerns,” Jones said. “I want to ensure there is open communication between different races and different people and to create that dialogue which is important to democracy.”
Within CHS, Jones has been working with the Social Justice Club and the Black Student Union to make this goal a reality. The group is still unsure of the exact direction it aims to take.
“[I envision] an open discussion where if someone wanted to say something they would be able to take the microphone and say what they need to say, like open-mic. We just want to create a field where people can express themselves in this very tense country,” she said.
As she strives to break down race and sex barriers in society, Jones is also attempting to heal the fractured relationships between many American citizens in this two-party system.
“Often, if you’re a Democrat, then you hang out with Democrats and don’t talk to Republicans.,” Jones said. “We are trying to create a dialogue between the two parties and show everyone that we are not all that different from one another.”
Jones believes her empathy for others inspires her to act.
“I am a very empathetic person, and I think that is the reason why I have been empowered to speak out and share my voice. As a society, we need more empathy,” Jones said. “For example, let’s say there is an issue with Planned Parenthood. I have never used Planned Parenthood myself, but I would still support them. I can see beyond myself, and that is critical in helping people beyond your own race and your own gender.”