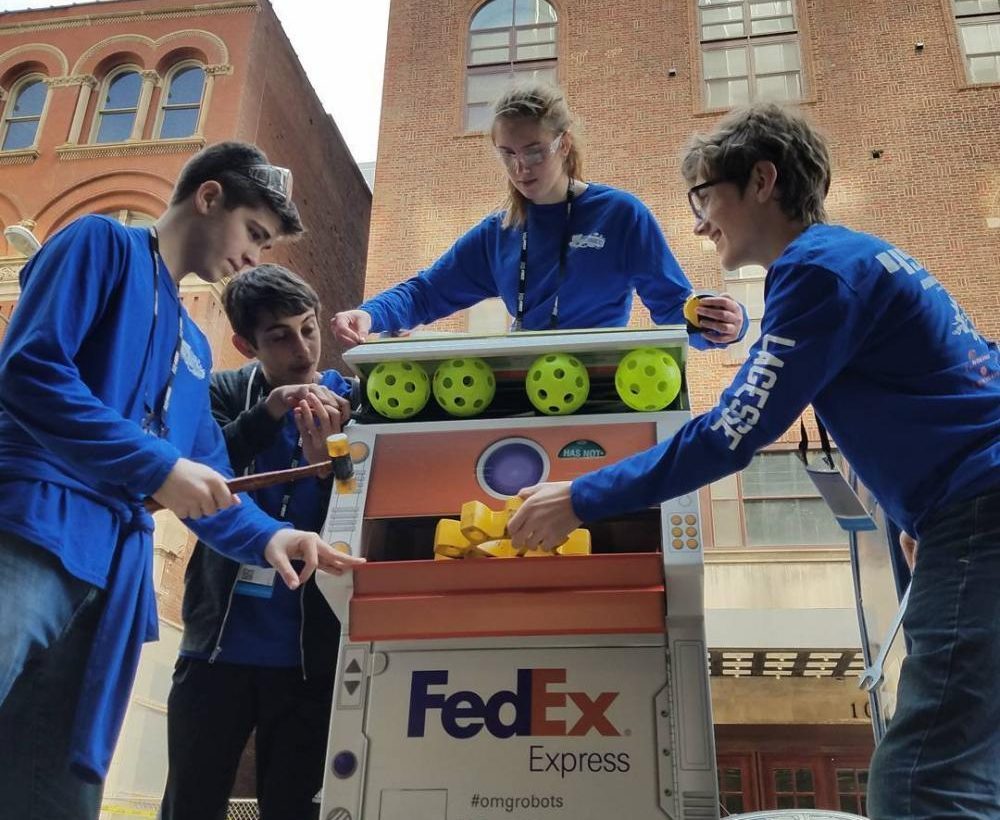 They thought the season was over.

After six weeks of building and two of competing from the start of 2017, the Clayton Robohounds returned from the mid-March Central Illinois Regional with their bot Brian, the Husband Stealer and an engineering award. One week earlier, they competed at the St. Louis Regional. Both times, they were eliminated in the first round of playoffs.

Each year, the Robohounds design, build, and program a robot to play in the FIRST Robotics Competition game. This year, the steampunk-themed challenge, STEAMWORKS, involved teams of three robots shooting “fuel” (whiffle balls) and loading gears onto “airships” in the field.

The Robohounds’ strategy initially involved shooting fuel, but, just before the competition, they decided to focus on gears. The robot used a mechanism to pick the gears up off of the floor, giving them an advantage over most teams which could not do that.

They returned from a depressing defeat in Illinois in mid-March, thinking the season was over but wishing for more.

Then, they got the wildcard.

That meant the Robohounds had been randomly selected to attend the World Championships from April 26-29, held in downtown St. Louis. Lead Mentor Stephen Beauchamp held a team meeting to announce it and excitement rushed through the team. CHS senior and Business Team Lead Zachary Sorenson then scrambled to hold a donut fundraiser to pay the five thousand dollar entry fee.

On Wednesday night, a few students and the Beauchamp drove down to the Edward Jones’ Dome to set up the pit and play a few practice matches.

With over 1,000 teams representing 39 countries, the World Championship is split in two locations, Houston and St. Louis, where the teams are then split into six divisions. The Robohounds found themselves in the “Curie” division with about 70 other teams, many of whom had already faced Clayton at previous competitions.

“My favorite part of the world competition was getting to see all of the teams from all of the different places,” CHS senior and Electrical Team Lead Conner Bone said.

Qualification matches began on Thursday morning and the Robohounds started the day off with a performance which would have set the world record in a playoff match.

Initially in first place, by the end of the qualifiers the Robohounds had maintained a high rank with a 7-2-1 record and were seeded fourth. The top eight teams then could select teammates to join their alliance for the playoff matches on Saturday.

Meanwhile, other Robohounds took on the “Fedex Innovation Challenge.”

With a $5,000 prize offered, the challenge involved four tasks: a scavenger hunt, a short video, a physics problem and a math problem. A few students returned to CHS on Thursday afternoon to film the short video about Marie Curie.

“I really wanted the grant,” Sorenson said. While the Robohounds did not win the prize, their challenge entries can be viewed on their Instagram page.

Students and mentors discussed alliance picks and strategy in a McDonald’s until 11:30pm on Friday night.

On Saturday morning, the Robohounds chose MARS/ WARS, an opponent from previous competitions and FullMetal-Jackets for their playoffs alliance.

The Robohounds and allies faced the fifth seed alliance in the double-elimination quarterfinals. The mood in the stands dropped when they narrowly lost the first match because of penalty points.

Tension was high as they entered what could be their last match of the season. The score was close, but the Robohounds’ slight bonus from their strong autonomous program helped them win by 23 points.

Realizing they still had a chance, the spectating Robohounds and parents were revitalized into the third and final quarterfinal.

Despite the normal performance by the drivers, panic hit the crowd as Brian, the Husband Stealer nearly failed to gain a massive score bonus by climbing a rope at the end of the match. The robot had stopped just a few inches short of the touchpad.

In the last seconds of the match, the bot pulled itself up and barely pressed itself against the touchpad. When the light came on, signaling the climbing was a success, the fans jumped to their feet and cheered, knowing the match had been won.

As it turned out, the match was a shutout by nearly 250 points, so the climbing was unnecessary. The hype still left the crowd with smiles on their faces; they had made it to the semifinals.

The Robohounds’ reign came to an end as they lost both semifinal matches to the first seeded alliance and were eliminated. That team went on to win the Curie division and move to the overall tournament, where they finished third in the semifinals. “There was no one better to lose to,” said Beauchamp.

The team still felt great about their performance despite returning empty-handed.

“I’m proud of us,” sophomore Jillian Straetker said. “We did really well.”

Many Robohounds even felt surprised at their success.

“For being a wildcard that just happened to get into the world competition, it’s really great that we made it so far and to the semifinals,” senior and Strategy Team Lead Gage Adams said.

“I was really disappointed about not moving on, but we didn’t think we’d get as far. It’s great,” Sorenson said.

The Robohounds’ success on Saturday marked their biggest achievement since their double regional victory in 2014 and their best performance ever at the World Championship.

To celebrate, they will host a banquet on May 1.

“It was awesome,” CHS senior and Pit Crew Lead Genny Timmermann said. “It was a really great end to a senior year on Robotics.”