The Mulch Pile That Will Blow Your Mind 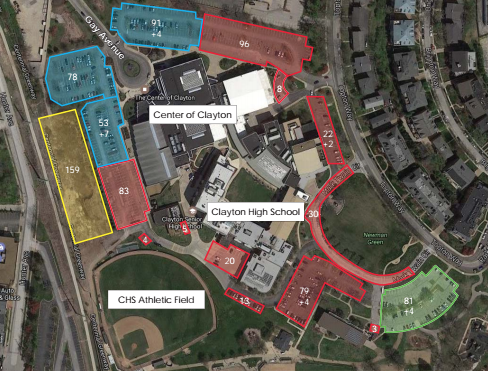 A graphic displaying the parking lot situation around the Center of Clayton and CHS. Photo from Clayton Parks&Recreation

The Mulch Pile. A dumpy piece of land west of the Center of Clayton that has touched the heart of many students. It’s almost hard to imagine what the CHS community would be like without it.

The Mulch Pile has been around for more than 20 years and, as the city has grown around it, it has not changed at all. It used to be where the city stored and mulched its leaves, but it sits vacant since the iconic piles themselves were removed.

“I think it would be a shame to let it stay the way it is,” Parks and Recreation Director Patty DeForrest said. “I think we need to do something with it, and, regardless of what that is, I think we need to clean it up.”

Plans for development of the Mulch Pile began around 18 years ago around when the Center of Clayton was built.

“The intent was always to do something else with it. It just took a long time to come up with how the city could run its mulch operation without that,” DeForrest said.

The first is to transform the lot into additional parking for the Center and the school. Currently, there are 674 parking spaces around the complex. However, during the school week the lots are almost always full.

“If [I] were to go any day of the school year, [I’m] going to have some difficulty finding a place to park,” said Alex Berger III, city Alderman. “The volume of people coming to our park is going up. This is a parking lot, and we don’t have enough space to park.”

This has notbeen helped by an increase of 103 students at the high school since the year 2000. As Clayton, unlike some other districts, has no policy on limiting student parking, the demand to availability ratio continues to increase.

In a land use forum on April 27, DeForrest explained how the Center consistently faces member parking complaints and illegal parking on school days. Additionally, the parking issues have forced the Center to decrease the rentals offered and have sent potential members to other recreation centers.

Devoting the entire lot to parking would yield a maximum of 159 new spaces, but this number would be decreased by city requirements for tree islands and other features. However, the expansion would still serve to meet the current parking demand, as well as accommodating increased demand from a planned expansion to the Center’s fitness facilities and a planned renovation of the baseball field.

“The center of Clayton is a meeting place. We are in a capital plan right now to enhance and expand this building which is an advantage for our community. People are going to drive to be here. That’s what they do,” Berger said.

There are also pushes to transform the Mulch Pile into a recreational park or field. The current area of the Mulch Pile could support two soccer fields for the first and second grade levels that could also be used as a practice field for high school soccer teams and field hockey teams.

However, the soccer fields would only have a 12 foot sideline buffer, as opposed to the 20 foot buffer preferred by the coaches. It would also require fencing and would attract more drivers to the area further increasing the need for parking.

Other ideas include a combined soccer field/parking lot, a community garden, a green space, a basketball court and a dog park.

Superintendent Dr. Sean Doherty asserted that the district did not favor a particular idea.

“If eventually the Board has to be a part of this we want them to be able to make an informed decision,” Doherty said.

Once a final decision is made the city will move forward with renovations.

“I would love, by the time next December comes, for us to be doing something,” DeForrest said. “The school year starts and it’s not too bad, but as kids age up and get their license…we get busier…I’d love to see something happen by then.”

When construction does start, funding will likely come from the city’s capital budget, on which the Mulch Pile renovation is at the top according to DeForrest. Depending on involvement from the Center or the Clayton schools, those groups will have to contribute to the cost.

In the end, despite whatever the final decision is, the land will once again serve a purpose.

“We want to support the school district, and we want people to come to Shaw Park.” Berger said.