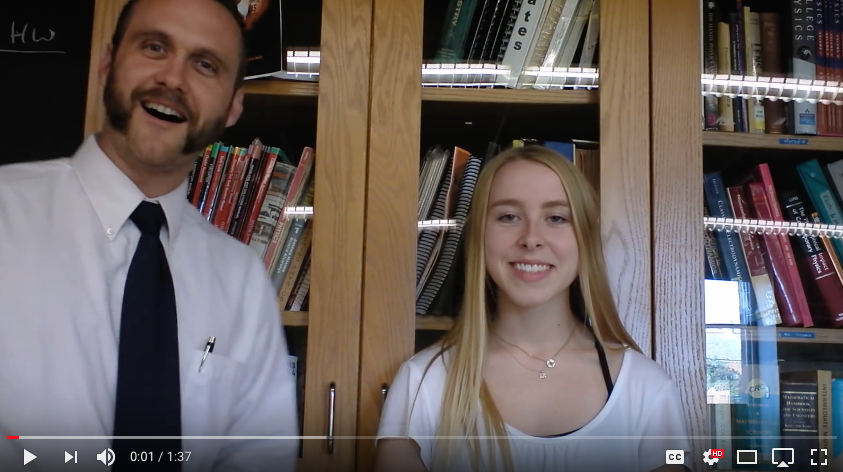 Schuster and Rapp in one of Schuster’s videos.

Doc Schuster, a channel accumulating over 485 videos, was first created in 2012, with Schuster merely attempting to save time in his AP Physics classes by having his students view his lectures at home. This style of teaching is also known as a “flipped classroom.”

A flipped classroom, as defined by The Flipped Learning Network, “is a pedagogical approach in which direct instruction moves from the group learning space to the individual learning space, and the resulting group space is transformed into a dynamic, interactive learning environment where the educator guides students as they apply concepts and engage creatively in the subject matter.”
In other words, lectures are done at home, along with the regularly assigned homework, freeing up class time to have discussions, perform interesting labs and ask questions.

“A lot of these things happen by strange coincidences,” said Schuster. “I’ve been part of the forward-thinking teachers at Webster [High School], and looking at new ways to teach better. One of the things that were proposed was a flipped classroom model. I was struggling in AP physics, which was taught in one hour a day when here we get two hours a day. I was wrestling with how to ever get through all of the content, but also have labs, and God forbid a student should ask a question during one of my lectures because there just wasn’t time. I decided that this flipped thing would give me the time that I needed.”

Schuster found the opportunity to start making these videos when his daughter was in the hospital. Schuster devoted his free time during his daughter’s recovery to begin applying the concept of a flipped classroom to his physics class.

“It was quiet [in the hospital, so] I brought out my camera and started making some videos and I was following along my AP physics course and just posting the videos each day,” Shuster said. “And then I would assign them to my videos to watch.”

Similar to how many teachers use textbook reading assignments, YouTube became a daily tool that Schuster used in his class. Schuster even created an extension to his videos that allowed him to make sure that his students were watching the material and understanding the new lesson at home, using a software called EDpuzzle.

“EDpuzzle allows me to ask questions during the videos,” said Schuster. “It pauses the video and a question pops up and students answer. I can actually tailor feedback to their specific answer right there. If they’re getting a question wrong I can get them feedback, but don’t need to bother the students who are getting that question right with that feedback.”

While Schuster’s teaching style is new to Clayton’s physics department, his high expectations are not. Schuster has filled the position of recently retired, award-winning physics teacher Rex Rice. After 37 years of teaching, Rice led many groups of students to win various physics competitions.

“I’ve been really following Rex Rice’s work at Clayton for many years,” said Schuster. “We’ve had many encounters from being St. Louis Area physics teachers, but one that always struck me was I would take a team of students who I thought were wonderfully prepared to the annual physics contest, and then Clayton physics students would trounce my students. I knew that [Rice] was teaching them and I knew that he was doing something special here.”

While Schuster has very big shoes to fill, current CHS teacher Gabriel de la Paz thinks that Schuster is the right man for the job.

“I think he’s very engaging with students,” De la Paz said. “I think he has really cool ideas about how to get students to come up with material on their own.”

De la Paz isn’t the only one who’s a fan of how Schuster engages with his students. Other physicists across the world tune into both his own videos, as well as videos of Webster students’ “Indie Labs.” Schuster gives students the opportunity to dive into an independent study regarding a physics topic of their choosing that culminates in a presentation.

“I designed this idea that students should be doing physics of their own interest,” Shuster said. “It’s really the ultimate experiential learning – where you’re looking into something and delving into it personally. Putting them on YouTube has been really fun, because we’ve actually had a few physicists [give] my students feedback throughout the years on their projects. And that’s the nature of independent labs, that they’re going to go beyond their teacher.”

Many of Schuster’s other videos mimic the style of Khan Academy creator Sal Khan, a banker who created a learning empire online after creating a few videos in order to tutor his nephew long-distance. Khan’s whiteboard videos are how Schuster really got started. In addition to this, Schuster wanted to add his own, fun teaching style to his videos to make them more interesting and enjoyable for students who wanted to learn physics.

“I looked at all of the YouTube channels that existed at that time in physics. Either they were poor instruction, or they were super dry,” Shuster said. “So I took that attitude of being a really interesting teacher and having personality and I started teaching.”

Breakthrough Junior Challenge Semifinalist, Emily Rapp was one of Schuster’s AP physics students at Webster. Schuster coached Rapp through this competitive physics competition. Rapp submitted a video hoping to win a $250,000 scholarship for herself, $100,000 for her high school and a $50,000 grant for Schuster as well.

“When I entered in the Breakthrough Junior Challenge last year, he was so helpful, reading and editing my script and helping me think of bigger and better things to include,” Rapp said. “Being at college now, I really miss his class. Professors don’t make a connection with you like Doc does, and I know college would be 10x harder if I hadn’t gone through two years of intensive AP Physics.”

Rapp is currently majoring in Biochemical Engineering with a pre-med track at Missouri University of Science and Technology.

“Dr. Schuster is an incredibly caring individual,” said Rapp. “Some people teach, but Doc dedicates himself to helping people grow. Dr. Schuster’s class is challenging, but who wouldn’t want a challenge? He pushes you, sometimes a little too far outside of your comfort zone, but it’s always so rewarding when you figure out the answer. I personally am quite inspired by him. He’s always willing to help.”