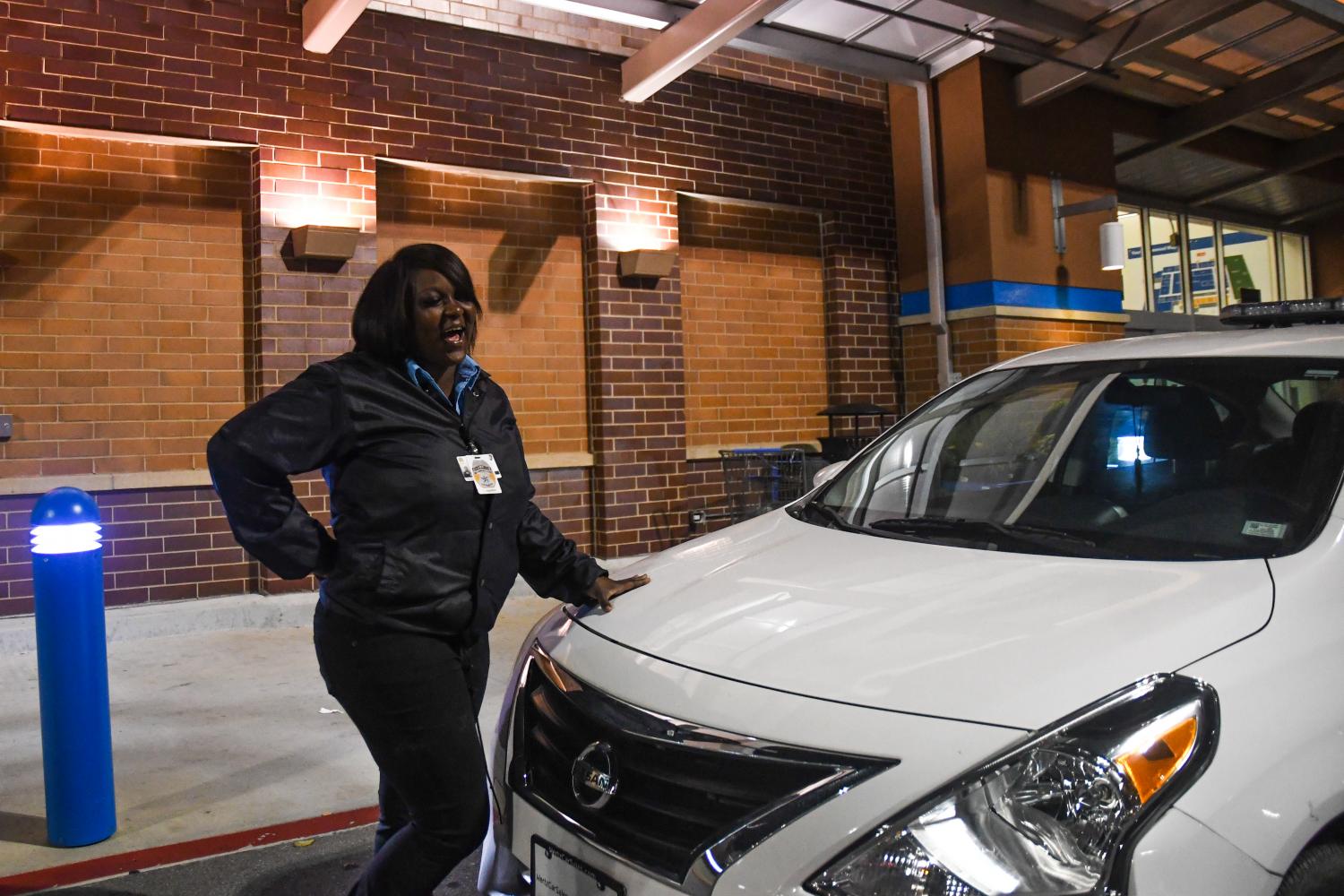 Diamond poses in front of the Walmart Supercenter. Photos by Michael Melinger.

Walmart security guard shares her story with the Globe

“About a month ago, this lady, she had a pretty dress on, walked clean out the store. The cart [was] full with stuff. No bags. I [said], ‘Ma’am, ma’am, please stop.’ She rolled so fast out of there. She had $500 worth of stuff. They caught her at the QuikTrip and she got locked up for a felony,” LaTia Diamond, the nighttime security guard at the Walmart Supercenter in Brentwood, said.

Once the sun goes down the 23-year-old watchman starts her shift fighting the common criminal at the internationally-based supercenter. Before the sun comes up, Diamond is back at her home in South St. Louis ready to take her 3-year-old daughter to preschool.

“I see [my daughter] throughout the day. That’s why I like the overnight shift. I’m able to see her more, and interact with her more. When it’s time for her to go to sleep, I’m at work. I get to teach her life things everyday,” Diamond said. “She knew how to walk at 10 months, she was potty trained by one and a half. I just teach her the best that I can as of right now.”

Diamond’s mother watches and takes care of her granddaughter on the nights that Diamond is not scheduled to work. Diamond has been living with her mother since she had a stroke and was diagnosed with diabetes three years ago. Although her mother’s health issues were anxiety-provoking, Diamond remained resilient and kept working to support herself and her family, as she had done all her life.

“Before my daughter, I had all types of jobs. I worked at Five Guys, Sears, Save-a-Lot, a couple nursing homes,” Diamond said.

Diamond started working after beginning her high school career at Roosevelt High School in the south side of St. Louis. She was forced to give up many of her true passions to work, including the volleyball team where she was the star player on the varsity squad.

Since she was just born, her mother was obliged to support her daughter financially completely on her own, as Diamond’s father was not there for the bulk of her life.

“When I was 3 months, he got locked up. He told me he had three strikes. He had been in and out of jail all his life,” Diamond said. “He got locked up for everything you can think of. He had killed somebody, but that’s not what he was locked up for. My daddy was the devil.”

Diamond’s father was initially convicted and sentenced to serve three life sentences. However, after good behavior and serving 21 years, he was released.

The first time Diamond met her father, she was noticeably nervous, while her father was exceedingly excited. Nevertheless, Diamond’s nerves quickly vanished as she witnessed her father’s figure for the first time.

From that day on, Diamond frequently visited her father without letting these appointments influence her schoolwork.

“[It did not] affect my school studies because my mama was on my head. I was in the honors classes, grades were always good,” Diamond said. “It didn’t really affect my academics. It just affected my mind’s state.”

Diamond has forgiven her father, who has been out of jail for three years.

“We are close. I feel like he is some part of what happened in my life, but I can’t blame him either because he had a life to live too,” Diamond said. “If my dad was there, I wouldn’t be too focused on boys.”

Since her father was released from prison, he has completely changed his way of life. He has stayed away from the streets and has been a noble citizen.

“He is doing good now. [He has] a condo [and] a new 2016 Malibu. He’s only been here three years and he’s doing better than me. He [is working] at a factory company in St. Peter’s,” Diamond said. “He gets paid a nice amount of money. He found a girlfriend, they got engaged. Two heads are better than one.”

At Roosevelt High School, Diamond was a stellar student. When senior year finally came, Diamond was excited to head off and pursue a higher education.

“I got accepted into three colleges, but I didn’t go. I should’ve went. I got accepted at [SIUE], UMKC and University of Missouri. I didn’t go because [of my] boyfriend. There are distractions,” Diamond said. “That’s why I have to make a way for my daughter so she won’t have to deal with distractions. She will be more focused on the books.”

“We met at 14. I was his first everything. He wasn’t my first. I wasn’t a thot, but I knew what I was doing. I click with dudes a lot,” Diamond said. “I get where they’re coming from, but he still hurt my heart so I had to let him go. But I can’t judge you for you living your life.” After high school, the couple got an apartment on the North side of St. Louis. Diamond was financially supporting the two of them on her own. When she was only 20-years-old, Diamond learned she was pregnant with a girl.

“[I’m] just one person doing everything. [I’m] superwoman. That’s why my [child’s father] picked me as his child’s mother; because I am a hard worker,” Diamond said. “I am gonna  provide for my daughter. Instead of being at home with my child, I gotta be at work. If I don’t work, she don’t eat.”

According to Diamond, the relationship was strong in the beginning. However, Diamond was searching for a man with a clear career in mind. Her daughter’s father was not interested in full-time employment.

“I was with him for five years. He was cheating for two years,” Diamond said. “When stuff is good, you put up with certain things.”

Her ex-boyfriend occasionally spends the day with Diamond’s daughter. However, he is still unemployed and is currently living with a new woman.

“That man has a girlfriend with six kids right now. He has one child. His girlfriend gets all types of checks. Welfare checks and disability checks for some of her kids that are disabled. She has no job. She gets $2,500 a month,” Diamond said. “She doesn’t work hard, like some of us out here.”

“My baby daddy didn’t like that because he was my first love. [My ex-boyfriend] busted in my house when I was living with my [new] dude. My [boyfriend] was just chilling there. He opened the door, came in and was like, ‘I want to see my daughter.’ He said he was trying to see my daughter, but he was really just mad because I was living with somebody. [He was] mad because another man was around his child,” Diamond said. “He is still in love with me. He [tells me this] all the time, he still wants me. He’s not doing anything, he’s not on my level. I need somebody right here with me or a little bit above, so we can get somewhere in life.”

Throughout her 23 years, Diamond has learned the importance of having a job. Now that she must provide for her daughter alongside herself, she recognizes this importance more than ever. Nevertheless, she fails to blame her ex-boyfriend for their conflicts and has remained a good friend of his.

“I see him all the time. We are cool people. I’m the type of person that doesn’t hold grudges,” Diamond said.  “You gotta let go what you can’t control. You gotta let it go how it go.”