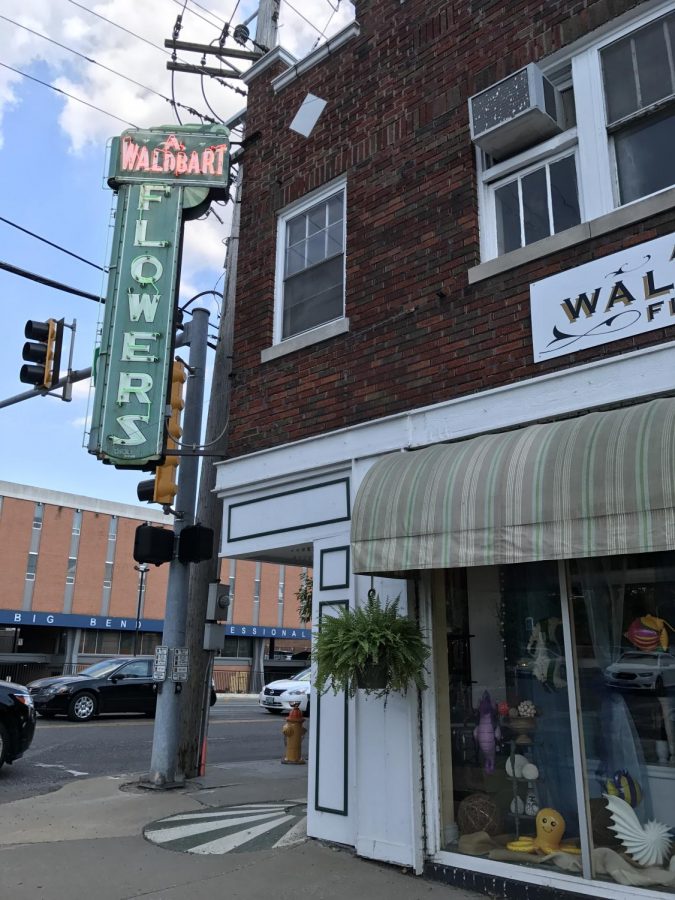 For more than 50 years, Alex Waldbart Florist occupied the 97 year old building on the corner of Big Bend and Clayton. The charming exterior and old school sign hanging above the front windows made the iconic building a perfect home for the family run florist whose roots extend nearly 145 years in the community. However, by the end of the year, the picturesque corner will too become part of St. Louis history.

Claire Waldbart Kramer, the fourth generation owner of the business which her great-grandfather started when he arrived in St. Louis in 1872, takes pride in the role her family’s business has filled within the community.

Kramer who has been the full time owner for thirty years never planned on taking over her family’s business, but it all fell into place as her time passed. “Well, everybody kind of falls in somewhere, and that’s kind of what happened to me, I needed a job, and I never thought I would stay here. And here I am the owner,” Kramer said.

Alex Waldbart Florist continued a rich history of the corner of Big Ben and Clayton Rd. Kramer remembers hearing stories about the many other business that once occupied the building. “In the late 1920’s or 30’s was when it was bought. This store itself here has been a motorcycle shop, it’s been a tuxedo store, I think it was Casteli tuxedo, it was Glaser drugs, it was Jaffe lighting. In fact I had someone tell me this was the first building in St Louis that had fluorescent lighting,” Kramer said.

Despite all its history, the building will soon be gone and Alex Waldbart Florist along with Jon Paul Designs & Collectibles who also shares the building will be forced close its door for the last time at the location they’ve occupied since they moved in 1967. The owner of the building at 1005 South Big Bend Boulevard announced plans to sell the property. The 97 year old building will be torn down and replaced by a new Total Access Urgent Care center.

“It was a real shock”, said Kramer, who was not told of the plans until early August when a neighbor, who is also a property developer, was informed by the city. “You know if you don’t own a building you always kind of keep that in the back of your mind.” The new Urgent Care Center is being developed by Big Clay LLC and is part of larger eight store expansion in the St. Louis area. Beginning in January, development will begin on the new

However, the development has not been met without resistance from the local community. Many residents have voiced their frustration with the destruction of a historical building for new development. Especially considering that St. Mary’s hospital is located two blocks to the east and another Urgent Care already exist a mile to the south.

During a Richmond Heights Zoning and Planning Committee city council meeting in August, residents voiced their anger with the plans to tear down the building. Nevertheless, the council signed off on the plans, making way for the development to begin.

The owners of the building have tried to appease concerns of residents and help ease the trouble caused by the development. The planned design was adjusted to better fit in with the neighborhood’s aesthetic and a vertical sign was added to keep some of the character of the old building.

Even though it’s the last holiday season working in the building she’s grown up in, Kramer is determined to not let this change affect her business and her relationship with the community.

Next January, Alex Waldbart Florist will move to a new location in Clayton on Clayton road, just a couple miles west of their location now. Kramer knows it’s going to be a big change for her business, but even though the location and building will be different, she’s confident that people will still see it as the same florist

Kramer is positive that the next 50 years will be just as bright as the last.

“This is an opportunity to get better, to really take a look and go, Ok, we have this new start in front of us what can we do better. Because as a small business owner you are always looking to improve.”