The Globe sits down with senior Caleb Heusel, who has emerged as a leader on the CHS boys’ varsity basketball team. 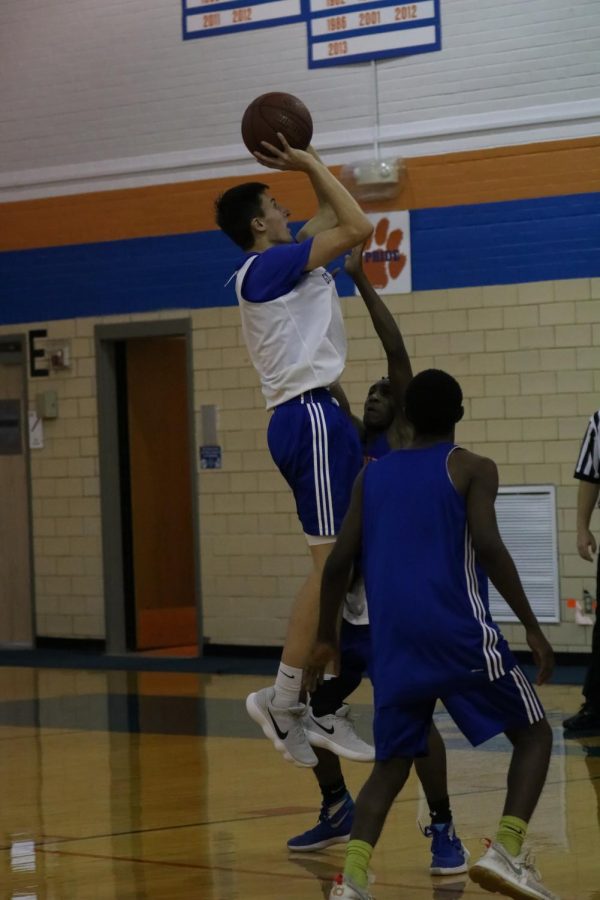 Heusel goes for a shot in practice in Stuber Gym.

Senior Caleb Heusel did not start playing competitive basketball until he was 12-years-old. However, since his sophomore year at CHS, Heusel has been starting for the Varsity squad.

“I started playing in fifth grade. I was on two or three rec league teams with my friends. Ever since seventh grade, every year I’ve been more and more invested and more competitive. You got to tournaments everywhere,” Heusel said. “I played with a lot of kids that didn’t go to my school. I picked it up pretty quick. I was already decently athletic so that didn’t miss out so much.”

As a kid, Heusel primarily played football and baseball. However, once the preteen felt the basketball in his hands, he could not put it down. It was initially not Heusel’s’ idea to try the new sport. He attributes his newfound skill to another figure who plays a large role in his life.

Heusel’s father was not the only relative of his to push him in the sport. His twin brother, Ethan Heusel, also a senior at CHS, has encouraged him as the two have played alongside each other for much of their careers.

“He’s always been there. [He] has pushed me in the last year. He was a manager. He could tell me after practice or during practice, if he saw me doing something wrong or something good – he would point that out,” Heusel said. “He’s always there to [give] words of encouragement.”

For Heusel, the recreational games did not expose him to a large enough challenge in order to properly develop his skills. Heusel’s transition from the recreational league to the traveling team was not painless given his lack of experience.

“I started to really work with some really good coaches, and with guys that were a lot better than I was. I was exposed to a lot better competition. From there I saw my skills really develop and take off more than they had in the past. At first, it definitely was [frustrating], but after a while, I learned to appreciate [it],” Heusel said. “You go and you train with these kids that are better than you, and then you come back to your rec league and nobody is as good as the kids you’ve been against. It’s frustrating in the fact that you’re not as good as they are. But then you bring it back and you can see that it pays off for you.”

Heusel was eventually given the opportunity to play with many of his close friends, which allowed him to feel more comfortable on the court.

“To have them with me throughout that process made it a lot easier,” Heusel said. “And a little bit more fun.”
In eighth grade, Heusel made the decision to focus primarily on basketball and to put his other extracurricular activities behind it.

Before the start of freshman year, Heusel, who grew up in Iowa, moved to Clayton. He immediately noticed key differences between the CHS and the high school he would have attended in Iowa.

“The high school I would’ve gone to in Iowa was a lot more athletically focused than Clayton,” Heusel said. “It really wasn’t too big of a change I don’t think. The offseason stuff is almost mandatory up there. Coming down here it’s very loose.”

Coming from intense training, the transition to the CHS basketball team for Heusel was especially smooth. Heusel played on the freshman team his first year at Clayton. However, Heusel did not feel that he had yet to reach his full potential.

“Sophomore year, over the summer I really earned my spot to be on varsity. That year, even [as] my first year on varsity, my role changed from coming off the bench and being more of a practice player to being more of a starting role,” Heusel said. “Being someone that can run an offense and put in two, three or four points a game. Not just being a role player.”

Halfway through his sophomore year, Heusel joined the starting five on the court. Since then, his role as a leader on the team has not stopped expanding.

“Over these last few years that role has grown to where I didn’t [just] have to score ten points a game, but I had to be that role player,” Heusel said. “I see my role as helping our underclassmen and juniors to see their roles as well. My role has always been to be someone that can run an offense, score when we need to, hit shots, play defense. As I’ve grown I’ve become more comfortable scoring more and playing strong defense.”

Heusel does believe he bears weaknesses in his leadership role. Heusel feels as if he could be more vocal on and off the court. Although he has his own concerns about his leadership role, his teammates do not fail to trust him at any point.

“Caleb constructively criticizes other players in a way that they won’t go into a shell or feel too neglected by him,” Sher said. “He really tries to uplift people and assist them in getting better.”

Sher has received the opportunity to work one-on-one with Heusel on multiple occasions.

“Caleb has assisted me in many ways. Especially in the way of being there when I need someone to shot around with or receive advice about basketball when coach is not there,” Sher said. “He has really helped me grow as a player.”

According to Sher, Heusel does not stop motivating and pushing his teammates to work harder.

Since last year, the team last two of its leading scorers: Ben Littiken and Nick Almond. As a senior, Heusel feels that he needs to fill the shoes of his predecessors.

“I see my role as filling the shoes of those guys, and helping our underclassmen and juniors to see their roles as well,” Heusel said.

Although it is not his primary concern, Heusel does have aspirations to play at the next level.

“I have goals to play in college. Not necessarily at the really high level, but somewhere where I could play and get a really good education,” Heusel said. “Basketball would be almost a pastime. A continuation from Clayton.” At the moment, Heusel has not received any offers. He plans to walk onto a small Division III school in Minnesota.

“I’ve been talking with coach [Ty] Cochran and I’ve got a highlight film. He can reach out and I can reach out,” Heusel said. “I’m going up to a school to visit, and to meet the coach up there. Once I start getting stuff sent and and once I start reaching out to these coaches, I’ll start getting some interest back.”

Head varsity basketball coach Cochran has been the greatest influencer on Heusel in this respect. Cochran has noticed the potential that Heusel bears, and believes Heusel should take his talents to a university.

“Ever since the very end of last year, he’s been [telling me], ‘I want you to not only lead this team but I want to help you for the next four years if you do play in college. You have the ability to go somewhere.’ There’s tons of opportunities,” Heusel said. “He’s definitely pushed me to be the best player I can be and prepare me for what’s next.” 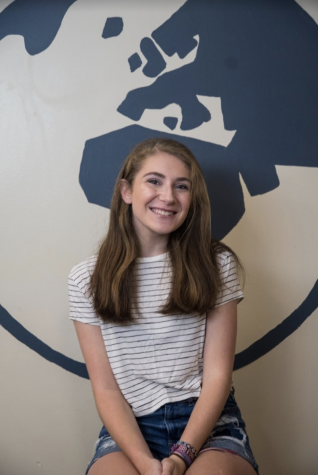 Mallory is super pumped to be a photographer for Globe this year! Her favorite things to photograph are portraits and concerts. She looks forward to an awesome year on Globe staff!