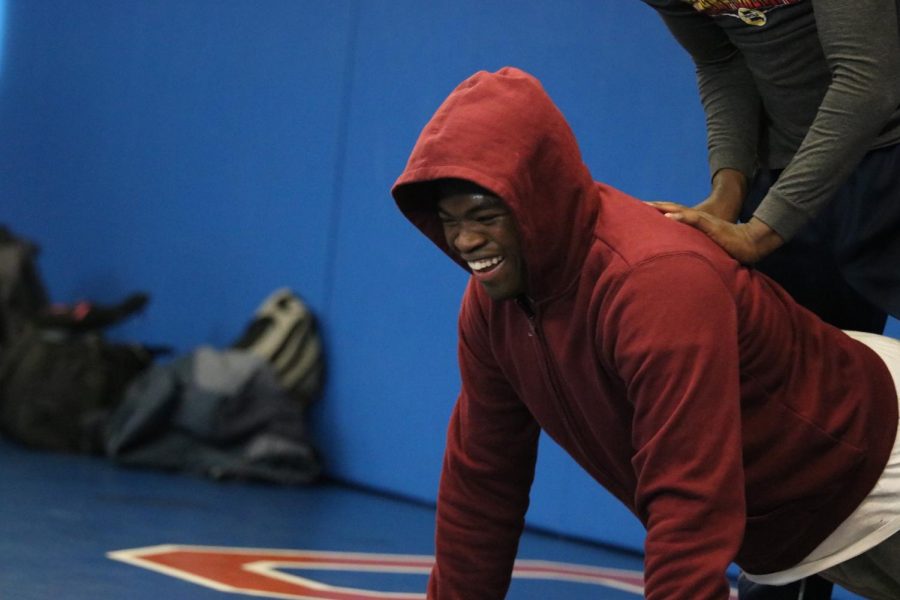 Photo of Austin during practice.

With the conclusion of the football season, CHS junior Jeremiah Austin is gearing up for the wrestling season. With his drive to perfect his craft after a tough shoulder injury late last season, Austin has been hard at work. However, Austin was not always a wrestler.

Freshman year, Austin originally planned to play basketball. However, after a full practice of running, he decided he had had enough.

“I really didn’t like all the running we did in basketball. I was talking with one of the football coaches and he [suggested] that I should come out and try wrestling,” Austin said. With this suggestion, Austin greeted a sport that has now become one of his passions.

Austin is one part of the well oiled machine that CHS has this year. The team has assembled another solid group of individuals and coach Cory Reichert has high hopes.

“Our team is open at the lighter weight classes but should fill the middle and heavy weights. We have some backups in weight classes so we will have the opportunity to rest. There is a mix of skill on the team from three and four year wrestlers to brand new to the sport freshmen,” Reichert said. “Our main goals this year is to qualify wrestlers for the state tournament and to have a winning dual meet record. I feel we will accomplish both.”

“I overextended my shoulder near the end of last season, so I couldn’t get to go to districts. I had to go through a lot of therapy and it was pretty scary,” Austin said. “However, now I’m working with the rest of my teammates and going through the basics again. The injury set me back. I’m working hard and trying to stay positive through it all.”

Reichert believes that Austin has the potential to have a breakout season.

“His greatest strength is his stamina, [and] I think his talent has progressed some but it is not where it should be or to the level he is capable of,” Reichert said. “I feel he will qualify this year if he consistently is aggressive in practice and in competition.”
In fact, junior Adam Sieber alluded to the impact that Austin has had on the team itself.

“Being our only heavyweight for the last two years, Jeremiah has certainly helped the team in a close meet. Jeremiah is known to overcome the adversity and give the team a win,” Sieber said. “[More importantly], Jeremiah has contributed to the team by bringing a positive vibe to each and every practice and meet.”

As Austin reflects on the upcoming season, his main goal is to build upon the success he experienced last year.

“I want to never be fearless when I go to a meet and use this mentality to win at least 25 matches. Hopefully, I’ll also qualify to state,” Austin said.

“I have noticed a huge different in Jeremiah’s confidence level along with his skill and technique. I predict Jeremiah will go to state this year as long as he continues to learn and get better as the season progresses,” Sieber said.

Nevertheless, regardless of the success he might see on the mat, Austin is just glad to be playing the sport that he loves.
“Wrestling has helped me a lot,” Austin said. “ It’s helped me to be a better football player, I’m very close to the team and the coaches are very helpful, and my parents love to watch me wrestle at meets.”