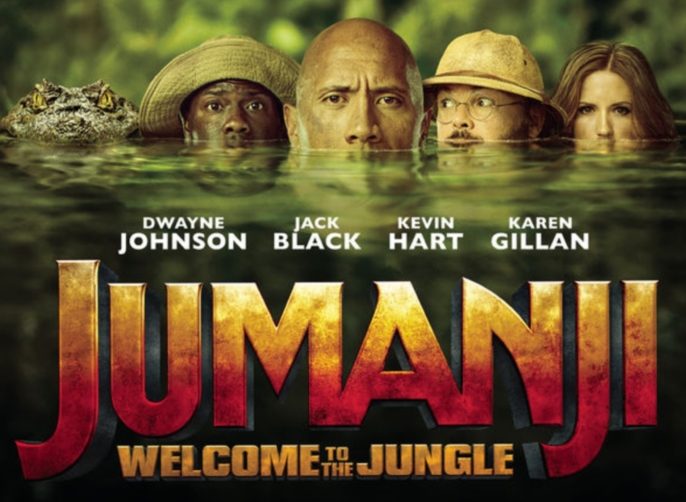 From 1981, to 1995, and now to 2017, a timeless classic has been brought back to the movie industry. The story of Jumanji is back in the form of another movie — an iteration of the 1995 film starring Robin Williams.

Jumanji: Welcome to the Jungle begins in New Hampshire during the year 1996. As an easter egg to the original Jumanji film, teenager Alex Vreeke is gifted the Jumanji board game by his father after finding it on a beach. Mysteriously, the board game turns into a video game cartridge. When Alex proceeds to play the game, he is transported into the game never to be seen again.

The story picks up on the four main protagonists 20 years later. Spencer Gilpin (Alex Wolff), Anthony “Fridge” Johnson (Ser’Darius Blain), Bethany Walker (Madison Iseman), and Martha Kaply (Morgan Jeanette Turner) are coincidentally brought together after they are all sentenced to detention. Whilst serving their time in the school’s basement, they find an old console with the Jumanji cartridge stuffed inside a storage box.

The four of them pick up a controller and choose a character. However, when they proceed to start the game, the console begins to emit a green light. In a matter of seconds, the four high school students are sucked into the world of Jumanji. Each of the protagonists are turned into the character they chose acted out by Dwayne Johnson, Jack Black, Kevin Hart and Karen Gillan with unique strengths and weaknesses.

As the four of them venture around the world of Jumanji, they begin to pick up bits of information regarding their mission and how to escape. With each of them possessing three lives, they have to take the “Jaguar’s Eye” that was taken from the main villain Russel Van Pelt (Bobby Cannavale) and return it to the jaguar statue in order to lift the curse set on Jumanji. Only by returning the jewel and yelling “Jumanji!” can they teleport back to Earth. While advancing through each of the game’s levels, they have to fend off Russel Van Pelt and his henchmen.

Along the way, they encounter Alex (Nick Jonas) inside of the game and join forces in order to beat the game together. It is at this moment Alex realizes that he has been stuck inside the game for 20 years. Nevertheless, the now five protagonists proceed through the game.

This film demonstrates a masterful combination of action, cinematography, characterization and humor. Each of the starring actors have their shining moments while continuously showing strong chemistry with one another. Despite having a predictable plot-line, the film does a great job piggy backing off the still popular 1995 version and adds a much needed contemporary twist to it. Furthermore, while I watched the film in the theatre, the film had many scenes that caused an eruption of laughter throughout the audience — its comedy is smartly distributed throughout the movie and is not overwhelming. In particular, the dynamic interaction between Kevin Hart and Dwayne Johnson is especially memorable.

For those nostalgic about the original Jumanji film or are just looking for an overall great action comedy, Jumanji: Welcome to the Jungle is for you.